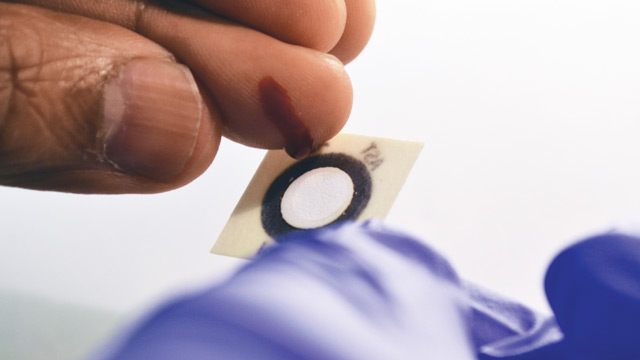 JUST A DROP: This paper-based test, which costs less than $0.10, could help health care providers in developing countries monitor for liver toxicity associated with HIV and TB treatments.COURTESY OF DIAGNOSTICS FOR ALLHuman immunodeficiency virus (HIV) and tuberculosis (TB) are two of the leading killers in the world, taking an estimated 1.7 million and 1.4 million lives each year, respectively. The worldwide distribution of medications to treat these diseases has been a boon to global health, but some of those drugs can cause liver toxicity, so patients taking them need routine liver monitoring.

In developed countries, that’s simply a matter of visiting the doctor’s office and having blood drawn. With a whiz in an electric centrifuge and a quick pass through an automated machine to detect liver metabolites, the results are in. But in developing countries such as Botswana and South Africa—areas plagued by HIV and TB...

Three years ago, Pollock joined forces with a local Massachusetts biotech company called Diagnostics For All (DFA) to develop a paper-based method for diagnosing liver damage that uses just a droplet of blood. The test was unveiled in September 2012: a square of paper the size of a postage stamp that costs less than $0.10 and measures liver damage with 90 percent accuracy in just 15 minutes (Sci Transl Med, 4:152ra129, 2012). DFA is now analyzing field-test data from 600 patients taking HIV and TB medications in Vietnam, and hopes to apply for regulatory approval in Europe and the United States within the next 1–2 years, says Jason Rolland, senior director of research at the company.

The test has the potential to reduce deaths associated with liver damage in the developing world, and is just one of a handful of new products aimed at bringing affordable, easy-to-use diagnostics to low-resource settings. DFA is using its technology, which takes advantage of the natural wicking ability of paper, to create cheap paper-based assays for preeclampsia and anemia in pregnant women, bacterial contamination of cow’s milk, nutrient deficiency in children, and more—all for pennies per test. Other companies are taking advantage of the near ubiquity of mobile devices, developing a smartphone eye exam, a flashlight that measures diabetes risk, and a tablet app that monitors both heart health and water sanitation.

To increase access to health care in the developing world, “we need a fundamentally different class of diagnostic devices—ones that are robust enough to be used in the field and simple enough to be used by midlevel professionals,” says Sailesh Chutani, president and CEO of Mobisante, a Washington State-based biotech that sells a smartphone-based ultrasound system. “I predict we’ll see more and more of this style of device. It is the only way to get a handle on the global health situation.”

Low-cost, point-of-care diagnostic tests are not new. Today there is a range of simple, rapid HIV assays available, including those that can detect HIV antibodies in whole-blood specimens (no blood processing required), as well as rapid diagnostic tests for malaria that produce results in only 15–20 minutes and require no laboratory or even electricity.  In the 10 years since these tests became widely used, they have transformed the management of HIV and malaria worldwide. They have also fueled an industry aimed at making similar low-cost diagnostics for other health burdens in the developing world, including the winner of The Scientist’s 2011 Top 10 Innovations contest—a $10 holographic microscope designed for use in remote locations.

“Not all innovation needs rocket science,” Margaret Chan, director-general of the World Health Organization (WHO), said at the opening session of the 2012 Pacific Health Summit in London. “Given the world’s most pressing health problems, the true genius of innovation these days resides in simplicity.”

GOING DIGITAL: This smartphone ultrasound system is one of a growing number of diagnostic devices that take advantage of near ubiquitous mobile technology.COURTESY OF MOBISANTETraditional tuberculosis testing, for example, includes X-rays and blood tests, both of which are resource and training intensive. The simplest TB diagnostic currently on the market is a sputum smear test, which uses visual detection of TB in a sample of coughed-up mucus. An accurate diagnosis still requires a microscope and trained personnel to identify the bacterium, however. As a result, millions of individuals around the world have undetected, and therefore untreated, TB infections. And the WHO estimates that every untreated individual will spread the bacterium to 10–15 people each year.

Global BioDiagnostics Corp., a Texas-based start-up founded in 2009, is one company pursuing a TB solution, based on research funded by a Bill & Melinda Gates Foundation grant. Recently, Global BioDiagnostics’ founders at Stanford University and Texas A&M Health Science Center demonstrated the ability to detect a minute amount of TB—fewer than 10 bacteria in a sputum sample—using an engineered molecule that fluoresces when cleaved by a TB enzyme called BlaC (Nature Chem, 4:802-09, 2012). Global BioDiagnostics is now moving that proof-of-concept experiment into a full prototype test, which will require “no complex processing steps, no handling or pipetting sputum,” according to President and CEO Michael Norman. A $2,000 fluorescent reader will be required to measure the results, but each TB test is estimated to cost just $5 or less.

Other companies are turning to a new plague of the developing world—chronic diseases. “There is a huge upturn in chronic diseases—epidemics in diabetes, cardiovascular disease, and even cancer—that are now overtaking traditional global health diseases such as malaria,” says Bernhard Weigl, principal investigator at the PATH Center for Point-of-Care Diagnostics for Global Health.

To address this concern, PATH, a nonprofit global health organization that has already developed numerous low-cost diagnostics, is now evaluating two diabetes diagnostics: a quick strip test to diagnose gestational diabetes and a noninvasive diabetes-risk screening procedure. Diagnosing gestational diabetes traditionally requires 8 hours of fasting, a blood draw, and at least two doctor visits for pregnant women. PATH hopes to replace that ordeal with a quick-and-easy strip test that costs less than $3 and requires just a drop of blood. And a second test, under development by Netherlands-based DiagnOptics and New Mexico-based VeraLight, can assess diabetes risk by simply shining a light on a person’s forearm. PATH is currently testing the machine—which records fluorescence emitted from proteins in the skin, indicating the level of sugar in the blood—in clinical trials in India. Weigl hopes the assay will encourage at-risk individuals to take appropriate action to prevent the disease and will cost less than the common diabetes blood test, which runs about $65 per test at a doctor’s office.

“It’s the functional equivalent of a blood-pressure cuff for diabetes,” says Weigl. “Now we can screen large numbers of people relatively cheaply without any invasive procedure.”

There’s an app for that

To keep costs low, some companies are turning to mobile device technology that is becoming ubiquitous the world over. Washington State-based Mobisante, for example, opted to use a smartphone as the backbone for its handheld ultrasound system, which performs scans at a range of frequencies that allows evaluation of many types of tissue. The device, which costs $7,500 including the phone and ultrasound wand, was used in Joplin, Missouri, to help diagnose injuries of the victims of the 2011 tornado and has been used at the Everest Base Camp to screen individuals for pulmonary edema. Last year, the system became the first smartphone-based diagnostic device approved by the US Food and Drug Administration, and the company is currently building partnerships to move it into developing countries, says CEO Chutani.

Another smartphone-based diagnostic that could soon hit the market is a pocket optometrist. Massachusetts-based EyeNetra has developed a $2 plastic lens attachment that snaps onto a smartphone screen and a mobile phone app that gives simple instructions for measuring nearsightedness, farsightedness, and astigmatism. This portable eye exam, which emerged from the Massachusetts Institute of Technology’s Media Lab, could help as many as 2.4 billion people worldwide who need glasses but do not have them, says Vitor Pamplona, cofounder and chief technical officer of EyeNetra.

Also in an effort to keep costs down, diagnostic companies are working to develop tools that can be used directly by patients, bypassing the trip to the doctor’s office. EyeNetra’s device, for example, comes with a simple tutorial and connects to a network service, so that a patient can self-administer the vision test and send results straight to an eyeglass store or ophthalmologist. Similarly, Mobisante’s smartphone ultrasound device connects to wireless networks in order to save images in the cloud and e-mail them directly to a doctor. And DFA hopes its liver toxicity test will someday be a home test, allowing patients to apply a drop of their own blood to the paper diagnostic, snap a picture of it, and send the picture to their physician. 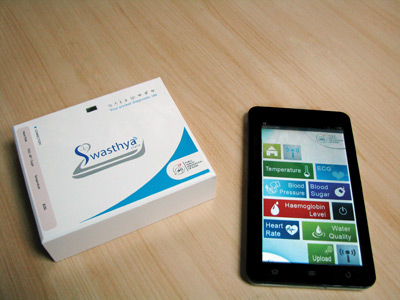 THE DOCTOR IS IN: The Swasthya Slate health tablet provides multiple diagnostics and decision support systems for frontline health workers in India.COURTESY OF UTSAV SHARMAAt the Public Health Foundation of India, health systems engineer Kanav Kahol and colleagues are even hoping that their easy-to-use diagnostic tool, the Swasthya (meaning “health” in Hindi) Slate, will boost the local economy. The Slate is a book-size machine that wirelessly communicates with an Android tablet and includes a bag of plug-and-play sensors that measure blood pressure and levels of blood sugar and hemoglobin, conduct electrocardiography (EKG) tests, and assess water quality. The $350 Slate, including the mobile tablet, is already in use by health-care workers in several southern Indian states. The ultimate goal, says Kahol, is to distribute the device to mobile health assistants, who pay just half the cost while the government picks up the rest of the tab. “Then these guys have a self-employment model, where they can offer these services from home to home for a small fee,” says Kahol.

While low-cost diagnostics could revolutionize health care in the developing world, there is one major hurdle to bringing these products to market—money. While the products themselves are cheap, development isn’t. “The problem is almost always funding,” says PATH’s Weigl.

In order to fund a product, some companies look to first sell their device in North America and Europe. The same traits that make a diagnostic appropriate for the developing world—low cost, portability, ease of use— also make it attractive to developed markets. Mobisante, for example, has sold its portable ultrasound device to community clinics and large hospitals in the United States. “Our initial goal was to focus purely on emerging markets. But we realized is that is hard to do, so we found some niches here to get us started,” says Chutani.

Even a simple technology such as the DFA liver test could be used in developed countries as a way to conserve resources, says Pollock. Of course, “the first priority is the resource-limited setting,” she emphasizes. “We want all people to now have access to the same standard of care as people in a resource-rich setting.”