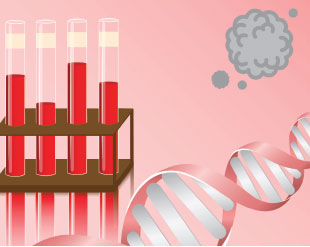 MODIFIED FROM © ISTOCK.COM/DEEPIN NETNo matter where a tumor lurks in the body, its secrets circulate in the blood. Stray tumor cells begin metastatic migrations by slipping into the vasculature. Vesicles secreted by cancer cells and free-floating DNA are also released into the bloodstream. Because these bits of cellular debris are a grab-bag of biomarkers that could both signal a cancer’s presence and predict its progression and response to treatment, the use of blood-based tests, or liquid biopsies, to detect and evaluate them is now drawing significant commercial interest.

In January, sequencing giant Illumina announced that it was launching GRAIL, a new company that aims to develop a single diagnostic blood test for multiple cancer types. Illumina joins other big hitters such as Johnson & Johnson, Qiagen, and Roche, along with at least 30 other new companies, both small and large, in committing to...

One goal of liquid biopsies is to screen for cancer before symptoms appear, as most tumors are much more easily treated in the early stages of disease. So far, only one test is approved by the US Food and Drug Administration (FDA) as a cancer screen based on free-floating tumor DNA, and it relies on fecal samples, not blood. In 2014, Exact Sciences of Madison, Wisconsin, became the first company to receive approval for a cancer screening test, called ColoGuard, which spots colon cancer–linked mutations in cell-free DNA collected from patient stool. The test is approved to screen people with an average risk of colon cancer; if positive, the results must be further verified by colonoscopy and other methods.

Other companies are now champing at the bit to get a share of the cancer screening market, and most are turning their attention to blood, which is likely to carry DNA from tumors located outside the gastrointestinal tract, allowing researchers to scan a wider variety of cancer types. At least one early attempt to bring liquid biopsies to market was premature, however. Last year, San Diego–based Pathway Genomics began advertising a screen “for the early detection of up to 10 different cancer types in high-risk populations.” But the screen had only been tested in already-diagnosed patients, not in at-risk individuals, and within weeks of making it commercially available, the company received an FDA notice to provide more information about their promotional claims before further marketing. “We . . . have not found any published evidence that this test or any similar test has been clinically validated as a screening tool for early detection of cancer in high risk individuals,” the agency wrote.

In November 2015, Pathway Genomics launched a clinical trial to evaluate its circulating tumor DNA tests on asymptomatic patients at high risk of cancer. For now, however, most firms are focused on more-immediate applications for liquid biopsies, such as evaluating cancer in patients who have already been diagnosed. Of several hundred liquid biopsies currently undergoing clinical testing in the U.S., most aim to identify mutations that can be targeted with drugs, predict which tumors are likely to metastasize, or track how a patient is responding to therapy.

“There’s tremendous pressure on companies that have investors to get a test out first and capture the early market,” says cancer researcher Bert Vogelstein of the Johns Hopkins School of Medicine in Baltimore, Maryland.

A handful of existing clinical tests monitor circulating protein biomarkers. For example, prostate-specific antigen (PSA) is used to detect and track prostate cancer, while CA-125 is used to monitor ovarian cancer. But while higher levels of these molecules are secreted by these tumor types, the proteins are also produced by healthy tissue, complicating the interpretation of results and leading to unnecessary procedures for many. In 2012, the US Preventive Services Task Force (USPSTF) found that roughly a third of patients who have biopsies experience complications. Of those whose biopsies detect prostate cancer, in the U.S. nearly 90 percent undergo surgery, radiation, or other treatments, which, in addition to the immediate risks of surgery, carry a 20 percent to 30 percent risk of long-term effects such as urinary incontinence and erectile dysfunction. Yet many of the tumors treated would never have been life-threatening; the USPSTF’s review found “adequate evidence that the benefit of PSA screening and early treatment ranges from 0 to 1 prostate cancer deaths avoided per 1,000 men screened.” As a result, the group recommended that physicians stop using PSA tests to screen for prostate cancer.

The latest generation of blood-based cancer assays in development detects biomarkers that are exclusively produced by cancer cells and can thus better inform treatment decisions. The first of this new class of tests to come on the market was Janssen Diagnostics’s CellSearch, which counts the number of circulating tumor cells (CTCs) in a given volume of blood. Approved by the FDA in 2004, CellSearch is the only CTC-based test with regulatory approval, and it is now used alongside other methods to monitor how patients with metastatic breast, colorectal, or prostate cancer respond to treatment: a decline in CTCs after therapy indicates a positive response, while an increase correlates with shorter progression-free and overall survival.

More than a decade after CellSearch’s approval, a spate of new tests is approaching the market—tests that aim to derive richer information about a patient’s tumor, closer to the information that can be gleaned from a tissue biopsy, which remains the “gold standard for diagnosis and genomic profiling of patients with cancer,” says Phil Stephens, chief scientific officer for Massachusetts-based Foundation Medicine, a company that develops genomics-based diagnostic tools. Much of the recent interest in newer blood-based cancer tests has grown out of the success of another modern diagnostic: noninvasive prenatal testing (NIPT), a relatively new clinical tool that assays fetal DNA in a sample of maternal blood to detect mutations, aneuploidies, or other genetic conditions that influence fetal health. Liquid biopsy assays targeting cell-free DNA use the same technology, and firms that already manufacture prenatal genetic tests are now entering the market for cancer genomics tests. Just last month, for example, Natera in San Carlos, California, announced promising data from four early-stage non-small cell lung cancer patients in a pilot study of a cell-free DNA–based liquid biopsy originally developed for NIPT applications.

“All those companies have realized that there’s actually a far larger market in cancer than there is in NIPT,” says Vogelstein, who is a founder of Personal Genome Diagnostics and an advisory board member for Sysmex Inostics, both companies that work in the liquid biopsy space. “It’s a perfectly natural business development to say, we have this technology that works perfectly well on pregnant women, can we use it to detect cancers?”

A third target of liquid biopsies in development bases cancer detection on secreted vesicles known as exosomes. Once thought to be cellular junk, these vesicles are more abundant in plasma than CTCs or cell-free DNA and carry several kinds of molecules that diagnostic tests can intercept. “They’re a relative newcomer compared to circulating tumor cells or cell-free DNA,” says Vincent O’Neill of Exosome Diagnostics. “But they contain DNA, proteins, lipids, many species of RNA. . . . From a diagnostic point of view, exosomes are really the jackpot.” (See “Cancer’s Vanguard” and “Written in Blood” from this issue).

It’s too early to know with certainty which tests will prove the most useful for which purposes. According to Phil Febbo, chief medical officer of Redwood City, California–based Genomic Health, which plans to launch a DNA-based screen later this year, cell-free nucleic acids are easier to accurately pinpoint in blood than CTCs, which are often identified based on cell surface markers that aren’t cancer-specific. “You can isolate [DNA] without requiring significant selection—without making guesses, however educated, as to what antigens to isolate from circulating tumor cells to pull them down, or how to correctly identify a circulating tumor cell before you analyze it,” says Febbo. Direct comparisons of the different strategies have yet to be conducted, however. In all likelihood, different circulating biomarkers will prove more applicable to different purposes, such as early screens, assessing a tumor’s genetic heterogeneity, and predicting a patient’s prognosis or treatment response.

Liquid biopsy assays that are furthest along in development target metastatic, recurrent, or advanced forms of cancer. “Eventually, we can do [these tests] very early in therapy to figure out whether a patient is responding to a new treatment or not,” says Maximilian Diehn of Stanford University School of Medicine. “But the products we’re likely to see on the market in the next year or two will very likely be focused on more advanced stage patients.” (Diehn is a consultant for Roche since the company bought his start-up focused on technology to detect circulating tumor DNA.)

Genomic Health’s test, for example, which is scheduled to launch in mid-2016, uses next-gen sequencing to screen circulating tumor DNA for a set of known mutations, and is intended for use in late-stage lung, breast, colon, ovarian, or gastrointestinal cancers and metastatic melanoma to identify mutations that can be targeted with drugs or can predict response to therapy. Foundation Medicine is also planning a commercial launch of its DNA-based assay this year, aimed for use in advanced-cancer patients with multiple metastases. Several firms are also nearing approval for their CTC-based tests for late-stage disease. The No Cell Left Behind platform from San Diego–based Epic Sciences, for example, identifies CTCs and allows clinicians to observe genomic and protein biomarkers in tumor cells. In studies of advanced prostate cancer patients, higher diversity in CTCs detected by the test correlated with overall survival and drug resistance.

Exosome-based tests are also advancing to market. In January 2016, Exosome Diagnostics announced the availability of the first exosome-based liquid biopsy for use in tracking the presence of EML4-ALK, a fusion of two genes that causes some kinds of non-small cell lung cancer. The laboratory-developed test, which measures exosomal RNA transcripts of the fusion of two genes, is still being discussed with regulatory agencies and has not formally received clearance yet, says O’Neill, the company’s chief medical officer. Rather than marketing the test as a replacement for current standards of care, the firm states that researchers or clinicians may use the test only if a tissue biopsy is unavailable, or in conjunction with other methods to screen for the gene fusion. “You could argue that that’s a fairly conservative approach,” says O’Neill. “But it’s reasonable because we’re at the cusp of this new era of testing patients noninvasively.” The company is also developing exosome-based diagnostics that test patient urine samples, and recently announced promising data from a prospective clinical study of one such screen for prostate cancer.

As blood-based tumor diagnostics continue to improve, they could be used at earlier stages of disease. Clinical trials from academic medical centers have begun to include patients with early-stage breast cancer, or men at high risk of prostate cancer, in studies to assess the use of circulating tumor biomarkers to diagnose and treat early disease.

Eventually, liquid biopsies could reach a point where detecting cancer in apparently healthy individuals is a reality. For example, Exact Sciences, maker of the colorectal cancer screening test ColoGuard, is now trying to expand its early screening tests to develop a blood-based liquid biopsy for lung cancer. Meanwhile, Illumina’s GRAIL and several others are investing heavily in the idea of cancer screening as a viable diagnostic test within a few years.

But realistically, such early screening tests are likely a long way off, says Vogelstein, and still face significant regulatory and ethical questions. Even if a premalignant lesion is detected early with a blood test, it might be difficult to know where the cancer is, or what is the best treatment option. Many slow-growing lesions don’t require any intervention, and screening tests will need to accurately separate these from fast-spreading malignancies and demonstrate that early detection actually saves lives. “That’s a very high bar to reach,” says Vogelstein. “This is why [early screening] is considered the Holy Grail.”

Jyoti Madhusoodanan is a freelance writer based in San Jose, California.