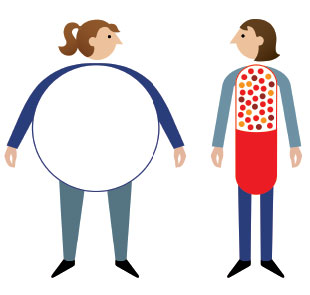 © GEMMA ROBINSON/THEISPOTSeveral years ago, antiobesity drug development was not looking so hot. In 2007, Sanofi-Aventis failed to win US Food and Drug Administration (FDA) approval for rimonabant—a pill that successfully helped people shed pounds—because the drug carried risks of depression and suicidal thoughts. Then, in 2008, Merck pulled the plug on its Phase 3 trials of taranabant because it also engendered suicidal thoughts and neurological effects in some participants. And a decade before those late-stage disappointments, a couple of FDA-approved weight-loss drugs were making headlines for carrying dangerous side effects. In 1997, the FDA pulled the obesity medications fenfluramine (of the wildly popular fen-phen drug combination) and dexfenfluramine (Redux) off the market after research turned up evidence of heart valve damage in people taking the drugs.

By 2009, Big Pharma was backing out of the weight-loss market, with Merck and Pfizer abandoning their programs to develop drugs...

But a few firms, including several small biotechs, decided to stick with it. “Some of the prior experience with drugs on the market, like fen-phen and Redux, have likely led large pharma to view the therapeutic space with some conservatism,” says Preston Klassen, executive vice president and head of global development at Orexigen Therapeutics, a small, California-based firm. “And generally, when you have that situation, smaller companies will step into that void when the science makes sense.” And their perseverance is starting to pay off. After a years-long drought in approvals for antiobesity medications, in the past few years the FDA has approved four new drugs specifically for general obesity: Belviq and Qsymia in 2012, and Contrave and Saxenda in late 2014. Three of these four were developed by small companies whose success hinges on one or a few compounds aimed directly at treating general obesity.

The concept of a silver or magic bul­let whereby one drug meets all of the needs within the obesity space has thus far proven to be inadequate.—Metten Somers,
University Med­ical Center Utrecht

The recent burst of antiobesity drug approvals reflects an evolving appreciation for the molecular intricacies of this multifaceted, chronic disease. Today’s antiobesity drugs—including the four recent approvals and several more in development—have traded the blunt cudgel of appetite suppression for more precise targeting of pathways known to play roles in obesity. “With our understanding of the complex biology of obesity and all of the different molecules and receptors involved in the process, we’re much better able to target those molecules and receptors,” says Arya Sharma, chair in obesity research and management at the University of Alberta in Canada. “These are very specific agents that are designed for very specific actions. There is renewed enthusiasm in this field.”

In the mid-20th century, the FDA approved several weight-loss drugs, starting with the appetite suppressant desoxyephedrine (methamphetamine hydrochloride) in 1947. Like the other appetite-suppressing drugs the FDA later approved through the 1950s and ’60s, desoxyephedrine accomplished short-term weight loss, but the transient benefit did not justify the side effects of long-term use, such as addiction, psychosis, and violent behavior. In 1973, as the nation voiced concern about the overuse of amphetamines, the FDA decreed that all obesity drugs were approved only for short-term use. The most recently approved obesity drugs, on the other hand, all have the FDA’s okay for long-term weight management.

Three of the newly approved drugs, Contrave, Belviq, and Qsymia, also aim to suppress appetite, and like many previous weight-loss therapies, all do so by targeting the hypothalamus, the brain region thought to be the seat of appetite control. Although the precise mechanism of Belviq, which is manufactured by San Diego–based Arena Pharmaceuticals, is unknown, researchers think that the key is its activation of serotonin-binding 5-HT2C receptors in proopiomelanocortin (POMC) neurons in the hypothalamus. When activated, these neurons reduce appetite and increase energy expenditure, according to Orexigen’s Klassen. His company’s Contrave also activates POMC neurons in the hypothalamus, while at the same time inhibiting opioid receptors, which would otherwise work to shut down POMC neuron firing, in the brain’s mesolimbic reward pathway. Contrave achieves this one-two punch because it is a combination therapy, incorporating two different compounds into a single weight-loss pill.

“The concept of a silver or magic bullet whereby one drug meets all of the needs within the obesity space has thus far proven to be inadequate,” says Klassen. “Right now I think the predominant opinion is that combination therapy is an appropriate way to go.”

Vivus’s Qsymia is also a combination drug, composed of phentermine—the other half of fen-phen and an activator of a G protein–coupled receptor called TAAR1—and an extended-release form of topiramate, an anticonvulsant with weight-loss side effects. Novo Nordisk—one of the few Big Pharma firms that stayed in the obesity game as others fled—is also turning its attention to combo therapies, testing its pipeline of investigational weight-loss compounds with Saxenda, its recently approved medicine that mimics glucagon peptide-1 (GLP-1), an appetite and calorie-intake regulator in the brain. “You need to combine at least two molecules to get the optimum effect,” says Novo Nordisk executive vice president and chief scientific officer Mads Krogsgaard Thomsen. The company has five other weight-loss compounds in development, and “we’re actually combining Saxenda with all of these new molecules,” he adds.

The University of Alberta’s Sharma agrees that combination therapies are a smart approach for attacking the multilayered mechanisms at play in obesity. “You’re dealing with a system that is very complex and very redundant. When you block one, other molecules or other parallel systems kick in,” he says. “My prediction for the future is that in order to get good results, one will have to move toward combinations . . . of more-specific and more-novel agents.”

On the heels of the recent FDA approvals, several new compounds with novel mechanisms of action are making their way through the drug-development pipeline. While most antiobesity drugs to date have aimed to suppress appetite by targeting brain regions involved in feelings of hunger and satiety, Boston-based Zafgen (for which Sharma serves as a paid advisor) is going after methionine aminopeptidase 2 (MetAP2) receptors in the liver and adipose tissue. “We’ve been one of the first ones to show that there is a significant and major weight-regulation center that the body has that exists outside the hypothalamus,” says Zafgen chief medical officer Dennis Kim. “Our drug [beloranib] is tapping into that mechanism.”

Zafgen researchers are investigating beloranib’s mechanism of action in patients that became very obese after their hypothalamus was damaged or removed as a result of craniopharyngioma, a type of brain cancer. “In about half of these cases, patients wake up hungry after surgery and it’s unrelenting, and they become morbidly obese very rapidly,” Kim says. Because the hypothalamus is damaged or missing, antiobesity drugs that target this brain region are ineffective. But beloranib “works just as well in these patients compared to patients with intact hypothalamus,” Kim says. As a result, beloranib may work in isolation without the need to combine different compounds, he adds. “If you can target a nodal point that’s much more upstream of simple circuitry-controlled hunger in the hypothalamus, you have the potential to reset the entire system.”

Meanwhile, another Boston-based firm, Rhythm Pharmaceuticals, is conducting clinical trials on obese patients with rare genetic disorders that compromise the melanocortin-4 (MC4) pathway, known to be involved in body weight regulation. Rhythm’s setmelanotide (RM-493) is a first-in-class drug that activates the MC4 pathway. And several companies, including the Japanese pharma firm Shionogi, are developing compounds that block the receptor of a neurotransmitter called neuropeptide Y, which plays a role in appetite stimulation and meal initiation.

Other new antiobesity targets include cyclic nucleotides, second messengers in signaling cascades such as the 3′-5′-cyclic guanosine monophosphate pathway, which conveys feelings of satiety and ramps up thermogenesis; amylin, a peptide hormone that slows gastric emptying and promotes satiety; ghrelin, a gut hormone that stimulates food intake; and a handful of pathways that affect nutrient absorption and metabolism. As more of obesity’s molecular complexities are sorted out, even more new drug targets will present themselves.

“I think we are on the verge of understanding obesity and the mechanisms underlying obesity,” says Novo Nordisk’s Thomsen. “That means that there is going to be a lot of good news for obesity going forward.” 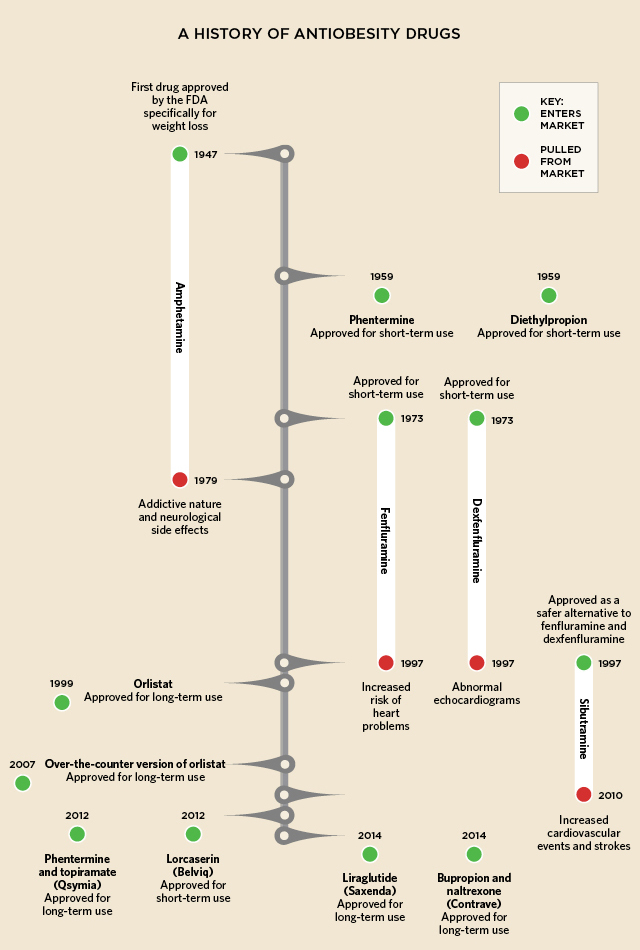