The recent move of the European Medicines Agency from London to Amsterdam is a reflection of the city’s vibrant life sciences and health sector and supporting industries.

In the fall of 2016, Alnylam Pharmaceuticals was looking to expand. The Cambridge, Massachusetts–based company had therapies based on RNA interference (RNAi) technology in late-stage clinical testing for a handful of rare diseases, and wanted to establish a presence in Europe to better serve patients there. By the end of the following year, the company had opened offices in Maidenhead, UK; Zug, Switzerland; and Amsterdam, the Netherlands, to serve as its three European hubs.

Scouting for new locations in Europe, the company found Amsterdam particularly appealing, says Marco Fossatelli, Alnylam’s country manager in the Netherlands. Alnylam already had long-standing partnerships with three large academic medical centers in the Netherlands that had hosted some of the company’s Phase 3 trials. And Amsterdam checked all the right boxes: it has a highly skilled workforce and is easily accessible and navigable by public transportation. It also had a blossoming life sciences and health sector. “[The city] has the right biotech spirit,” Fossatelli says.

A couple of years ago, a lot of people were in early phases, maybe clini­cal Phase 1. And now we see the first Dutch biotechs really deliver a product to the mar­ket, which is of course a real milestone.

Alnylam is not alone is its assessment of the Netherlands—and Amsterdam in particular—as a good location for biotech and pharmaceutical companies. Nearly two dozen life sciences companies established offices in the country in 2018, according to Charlene Verweij, an international press officer at Amsterdam InBusiness, the city’s official foreign investment agency; 42 more joined the following year.

But perhaps the greatest endorsement of the city’s growing life sciences and health sector was the EU Member States’ 2017 decision, following the UK’s vote to withdraw from the European Union, to relocate the once London-based European Medicines Agency (EMA) to the Dutch capital.

The presence of the EMA, which officially moved to Amsterdam in March 2019, is an additional lure for the pharmaceutical industry, says Annemiek Verkamman, managing director of Dutch biotechnology industry association HollandBIO. While the agency’s presence alone would not necessarily drive a company to open an office in the city, she says, the move drew attention to the country’s life sciences and health sector. “Now, the Netherlands is on the map.”

Practical reasons to set up shop in the Netherlands

Before the COVID-19 pandemic hit early last year, Anant Murthy would regularly leave his home in Geneva, Switzerland, first thing on Monday morning to catch a 6:40 AM flight to Amsterdam, and be at his office in the center of the city by 9 AM. “That’s less time than I know some people commute into New York City,” says Murthy, then Alnylam’s lead in the Belgium, the Netherlands, and Luxembourg region, although he has since left the company. His rapid commute was made possible thanks to the central location of Schiphol Airport, which is situated 15 kilometers away by highway—or 15 minutes on the train—from the EMA’s new location in the heart of the city’s business district. Several people who spoke with The Scientist praised the ease of travel to and from Amsterdam, with direct flights from Schiphol to many major European cities and overseas destinations.

Good airport access is especially important for Kite Pharmaceuticals, which creates personalized CAR T cell therapies that need to be produced and shipped to patients as quickly as possible. Kite’s original US facility in El Segundo, California, is just a few miles from Los Angeles International Airport, and recently the company, which was acquired by Gilead Sciences in 2017, opened a new production facility in Amsterdam a stone’s throw from Schiphol. “If you look out the window, you can see the airstrip,” says Louis van de Wiel, who heads up Kite’s new plant. “We are really close.” The Amsterdam facility, which received EMA approval last June, now serves as Kite’s European manufacturing hub, churning out a CAR T cell therapy, called Yescarta, that was green-lighted by the EMA in August 2018 for patients with certain types of B cell lymphoma.

Another advantage of Amsterdam for biotechs is its rich labor pool of highly skilled talent, says van de Wiel. Kite’s facility there, which opened in 2018 with only a handful of employees, now employs more than 400 people, and it’s still growing. In addition to drawing on the Netherlands’ own workforce, the company has hired from throughout Europe—something that’s easily done because Amsterdam is such a popular destination, van de Wiel says, being close to the ocean with a robust social scene, at least in non-pandemic times. Employees at the Amsterdam facility hail from more than 25 different countries. “Not only from an industry perspective [is Amsterdam] a hotspot, but also [as] an area to live,” he says. “People are, I think, attracted a lot of time to the Amsterdam area.”

Many international workers also benefit from the Netherlands having the highest English proficiency in the world outside of native English-speaking countries. “Outside of the UK, it’s the easiest [European country] for a native English speaker to interact and operate in,” says Jason DeGoes, the chief operating officer of the regulatory and compliance services company ProPharma Group, which opened an Amsterdam office in early 2019 to better serve clients in the area. 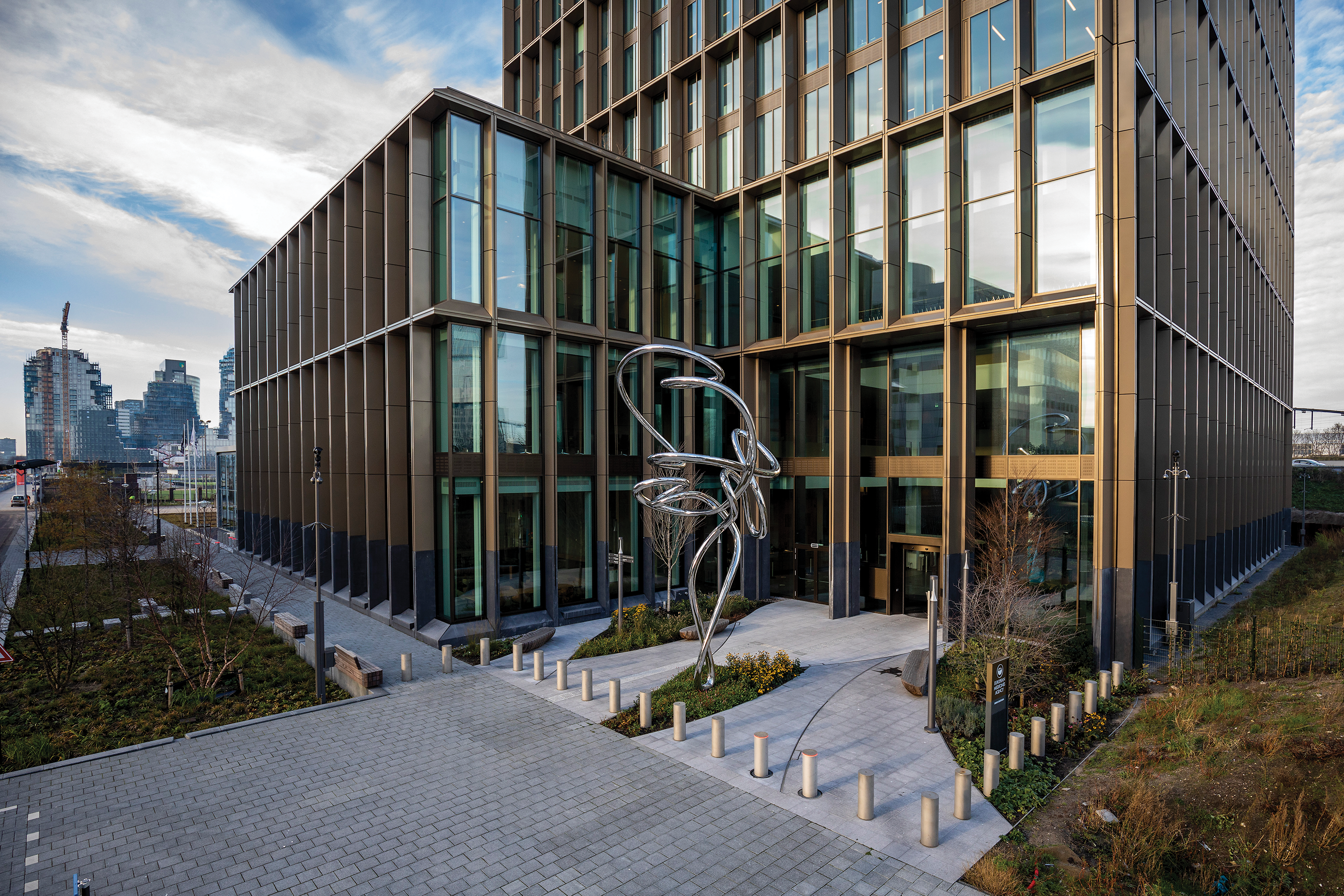 NEW HOME: The European Medicines Agency (EMA) made the move to Amsterdam from London in 2019.
ROBERT MEERDING

But perhaps the primary draw for international biopharma companies to Amsterdam and other Dutch towns with a life science presence is the country’s academic and commercial ecosystems. The Netherlands ranks number two in the world for numbers of patent applications in biotechnology. Numerous universities and medical centers coexist with 420 biopharmaceutical companies plus more than 2,500 other life sciences companies throughout the country.

Importantly, says Gerard Schouw, general manager of the Dutch Association for Innovative Medicines, Dutch industry and academia have a history of productive collaboration. The country boasts more than 500 public-private partnerships, including several focused on developing a vaccine against COVID-19. And the ongoing clinical development programs foster the growth of supporting sectors, including regulatory affairs consultancies, venture capital firms, and tech companies. “Talent, science, access to research, access to capital—everything you need to start an enterprise. Amsterdam has that, and it’s growing,” says Murthy, now head of Europe for the immunology company argenx.

The Netherlands was thus well positioned to host the EMA, not to mention companies looking for new European headquarters to continue serving the European single market after Britain voted to leave the European Union. (See sidebar below.) These shifts helped solidify the reputation of the Dutch life sciences and health sector, and perhaps even accelerated growth of the life sciences hub in Amsterdam.

“The EMA is here because of the healthy biotech industry,” says Bas Reichert, founder and CEO of microbial genomics company BaseClear and chairman of the Entrepreneurial Association of the Leiden Bio Science Park where BaseClear is located. “The biotech industry will even be better through the EMA.”

Drug development matures around the country

The EMA relocated to the Netherlands just as the country’s biopharmaceutical pipelines were starting to bear fruit. In August 2018, the agency approved daratumumab (DARZALEX), a drug created by Genmab and licensed to Janssen in 2012 for development and commercialization, as part of a combination therapy to treat patients with multiple myeloma. The Denmark-headquartered company has core facilities in the Dutch city of Utrecht, home to one of the country’s largest science parks.

Then last fall, the EMA approved filgotinib (Jyseleca), a treatment for rheumatoid arthritis developed by Galapagos, a Belgium-headquartered biotech with R&D facilities in Leiden, where much of the work on Jyseleca was carried out. (In the summer of 2019, Galapagos teamed up with Gilead to market the product.) And just last year, Leiden-based Pharming received the green light from the EMA to market its treatment for hereditary angioedema, a chronic disease involving swelling in various parts of the body, to children as young as two years old, in addition to adults and adolescents, who could already access the medication. Several other Dutch companies have products that are now in Phase 3 trials.

“The biotech sector in the Netherlands [has] grown up the last few years,” says Verkamman. “A couple of years ago, a lot of people were in early phases, maybe clinical Phase 1. And now we see the first Dutch biotechs really deliver a product to the market, which is of course a real milestone.”

In October 2019, the Dutch government appointed its first ambassador for the life sciences and health sector. Clémence Ross-van Dorp, former State Secretary for Health, Welfare and Sport, took on the new role at the beginning of last year to lead an action program to capitalize on the EMA’s relocation to the country. “The government really knows that the life science and health sector is a game changer for economic growth in the new century,” says Schouw.

Clarification (February 1): This story was updated from its original version to note that Janssen owns exclusive rights to develop and commercialize daratumumab (DARZALEX), a drug created by Genmab. The Scientist regrets any confusion.