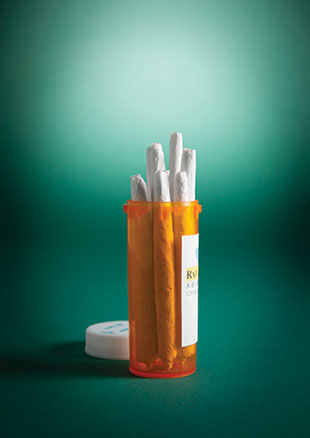 © 13/JAMES WORRELL/OCEAN/CORBISIn the 1990s, officials in the British government noticed something interesting in the nation’s courts: multiple sclerosis (MS) patients charged with marijuana possession were claiming that the plant offered relief from muscle spasms and pain. In 1998, after investigating the issue, the House of Lords Science and Technology Committee issued a report acknowledging the plant’s potential as a source of new drugs and calling for rigorous research “as a matter of urgency.”

Leading scientists were consulted, including biotech entrepreneur Geoffrey Guy, who had previously shown interest in developing cannabis-based medicines. The government granted Guy’s company, GW Pharmaceuticals, a license to grow cannabis plants. Guy’s idea was to generate strains rich in particular cannabinoid compounds that act on the nervous system, then test the effects of various cannabinoid combinations on MS and chronic pain. “It was a case of patient experience guiding scientific exploration,” says Stephen Wright,...

In 2010, the company announced the UK launch of its first cannabinoid-based product: Sativex, an oral spray for the treatment of MS spasticity, became the world’s first prescription medicine made from cannabis extracts. Sativex is now approved for use by MS patients in 24 countries, including France, Germany, Italy, and Australia. GW has partnered with Bayer and Novartis to market the product. It has also signed up with the American branch of Japanese pharma company Otsuka to commercialize the drug in the U.S., where it is currently in Phase 3 clinical trials for treating MS spasticity and cancer pain. Earlier this year, GW’s share price surged when the US Food and Drug Administration (FDA) granted orphan status to its cannabis-derived antiseizure drug Epidiolex, meaning it will be fast-tracked through clinical trials.

The company’s success is blazing a trail. In recent years, a handful of North American companies have set out on a similar path toward producing cannabis-derived pharmaceuticals. At least one company is developing candidates based on synthetic cannabinoids—of which two are already on the market in the U.S.—while several others are extracting chemical cocktails from the plant. They’re all hoping to capitalize on the anticipated growth of the cannabis pharma space by taking advantage of mounting data on the plant’s therapeutic effects.

“Frankly, we looked at GW and saw that the shift toward pharmacological development of marijuana is already happening,” says Craig Schneider, president and CEO of InMed Pharmaceuticals (formerly Cannabis Technologies), a Vancouver-based biotech focused on pharmaceutical marijuana. “We see the likes of Otsuka, Novartis, and Eli Lilly diving into the space, and we want to be part of that.”

Under the Controlled Substances Act, the US federal government classifies marijuana with heroin, LSD, and peyote as a Schedule I drug, defined as having high potential for abuse and “no currently accepted medical use.” This imposes logistical and bureaucratic challenges to its study as a medical treatment. (See “Medical Marijuana: Smoke, Fire, and Science,” The Scientist, July 2012.) Nevertheless, the last 25 years have produced some significant insights into its therapeutic properties.

Starting in the late 1980s, a steady stream of studies identified two receptors that respond to a group of bioactive lipids naturally produced in the body called endocannabinoids, which bind to the same receptors as several of the marijuana plant’s phytocannabinoids. The CB1 receptor is concentrated primarily in the central and peripheral nervous systems, and the CB2 receptor is predominantly expressed in the immune system. Collectively, human endocannabinoids have been found to help regulate almost every physiological system: nervous, immune, endocrine, gastrointestinal, and cardiovascular. “We know the endocannabinoid system is spread far and wide throughout the body and potentially can influence all kinds of other systems, disease states, and mental states, so it provides all kinds of possibilities for therapeutic targets,” says psychiatrist Michael Bostwick of the Minnesota-based Mayo Clinic.

Marijuana contains at least 108 different cannabinoids, some of which interact with these receptors, directly or otherwise, to varying effects. Only two, tetrahydrocannabinol (THC) and cannabidiol (CBD), have been well characterized. THC is known to exert psychotropic and pain-relieving effects, while CBD has been shown to possess antipsychotropic effects—which mitigate the high from THC—along with neuroprotective and anti-inflammatory properties.

Some companies have bypassed the problems associated with growing or acquiring marijuana by making synthetic cannabinoids. The synthetic approach has already yielded two FDA-approved drugs. Chicago, Illinois–based AbbVie manufactures dronabinol (Marinol), a synthetic version of THC in gel-capsule form that was approved in 1985 to treat nausea and vomiting associated with chemotherapy, and in 1992 for appetite loss in HIV patients. Valeant Pharmaceuticals, headquartered in Quebec, Canada, makes a similar compound called nabilone (Cesamet) to treat chemotherapy-associated nausea.

Their success has been limited, however, largely because they take up to an hour to take effect, slowed by having to pass through the digestive system. Moreover, patients report side effects such as severe anxiety, depression, and distress associated with the psychoactive effects of THC. Aiming to overcome such issues, Chandler, Arizona–based INSYS Therapeutics has developed an orally administered liquid formulation of dronabinol, which it hopes will offer faster onset of action and reduce side effects by providing for more dosage flexibility compared to capsules. The company submitted a New Drug Application to the FDA this past August. 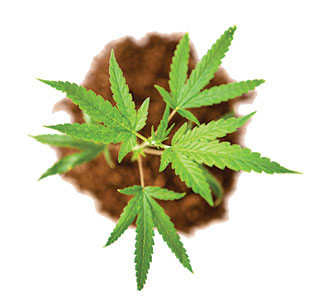 © ISTOCKPHOTO.COM/F00SIONINSYS is also aiming to get new synthetic cannabinoids through the approval process. Most notably, it is developing a synthetic cannabidiol (CBD) for a handful of conditions, including adult epilepsy, cancer-related pain, and glioblastoma multiforme (GBM), the most common and most aggressive malignant brain tumor in humans. The product is furthest along in development for the treatment of two rare forms of treatment-resistant epilepsy called Dravet Syndrome and Lennox-Gastaut Syndrome—the same conditions targeted by GW’s natural-extract drug Epidiolex, which is 99.9 percent CBD.

The FDA has also granted orphan drug status to INSYS’s candidate; the company is now in a race with GW to get through clinical trials and earn the seven years of market exclusivity offered by the agency in the case of drugs for rare diseases. Despite the fact that GW’s product is natural and INSYS’s is synthetic, both drugs are essentially pure CBD, and are therefore considered equal by the FDA and the European Medicines Agency (EMA). “It’s the composition of the finished product that matters,” says Ben Whalley, a neuropharmacologist who works on cannabinoid therapeutics at Reading University in the U.K. “As long as you’re first across the finish line with a positive clinical trial result, you’ve got it.”

Rather than developing synthetic compounds, GW has pioneered a new strategy by going after the real thing—purified cannabinoids from the plant itself. Currently there are no marijuana-extracted medicines on the US market, but a handful of companies with products in clinical trials are bidding to become the first drug based on natural cannabis extracts to be approved by the FDA.

“A viable natural product is less costly to develop,” says Sazzad Hossain, chief scientific officer of InMed Pharmaceuticals, which is developing cannabis-extract drugs for glaucoma and arthritic joint pain. Because the FDA regards any botanical product derived from a single plant as one product regardless of the number of components included, the natural approach also allows you to more easily combine individual compounds for multiaction effects.

In the case of GW’s Sativex—the product nearest to approval, with a Phase 3 trial in progress—researchers started out by combining extracts from plant strains bred to produce different concentrations of THC and CBD. They found that a mixture of two extracts—one high in THC, one high in CBD—had the most potent effect on MS patients’ muscle spasms, which result when myelin damage renders nerves dysfunctional.

Sativex’s mechanism of action is still being studied, but animal models have demonstrated that THC interacts with CB1 receptors to reduce overexcitation in nerves and reestablish some muscle control. At the same time, CBD has significant anti-inflammatory effects in the brain, likely helping to protect myelin from the autoimmune attacks that underlie MS. In addition, CBD is believed to mitigate the psychotropic effects of THC that many patients find distressing. “We think combinations of compounds with different properties is a logical way to go,” says GW’s Wright.

To make Sativex, the company extracts THC and CBD from plant strains containing high concentrations of each, then purifies them, before mixing the components in a roughly equal ratio and adding peppermint flavoring. Although it’s a complex mixture containing cannabinoids and hundreds of other bioactive compounds from marijuana, Sativex is a consistent product; the constituent ingredients are identical in every vial, Wright says.

GW used the same extraction and purification methods to isolate CBD for Epidiolex and to produce other cannabis-derived drug candidates for type 2 diabetes, schizophrenia, ulcerative colitis, and GBM brain tumors.

In an attempt to hasten the discovery process, InMed’s Hossain and his colleagues have developed a proprietary bioinformatics-based platform to identify new cannabis-derived drug candidates. Hossain explains that an algorithm trawls databases on the molecular structures of existing therapeutic compounds and how they act on their targets to identify phytocannabinoids and other plant compounds that might influence those same targets in a more effective way.

So far, the strategy has yielded two candidates: CTI-085 is a topical formulation for the treatment of glaucoma containing unnamed cannabinoids and compounds derived from noncannabis plants. In June 2014, the company reported preclinical studies that demonstrated efficacy in lowering the intraocular pressure that characterizes the condition, and entered the formulation into Phase 1 clinical trials. The second product, CT1-091, is a proprietary mixture of cannabinoids and other plant compounds that is in preclinical studies for arthritic joint pain and swelling. CEO Schneider expects to have four more candidates in the pipeline within the next year. “The nature of the endocannabinoid system and our fast-track discovery platform means we’re not limited to one or two diseases,” says Schneider. “That mitigates risk.”

Meanwhile, researchers at Colorado Springs–based Cannabis Science are working with the Italian Institute for Health and Science on Aging (INRCA) on preclinical studies of a formulation containing the marijuana plant compound cannabinol (CBN) to treat neurobehavioral conditions, including sleep disorders. In September 2014, the company announced a partnership with Unistraw, a Singapore-based company that holds patents for straw-like delivery systems in which pellets of formulated product in the straw dissolve predictably in liquids as the patient drinks, thereby releasing precise doses. Cannabis Science is also developing an extract-based formulation called CS-TATI-1 for the treatment of Kaposi sarcoma, a rare form of skin cancer that commonly affects HIV patients.

“I’m overjoyed that all this preclinical work done [with cannabis extracts] over the years is finally doing some good in terms of stimulating clinical development and businesses with viable models to take it forward,” says Reading University’s Whalley. “It’s extremely encouraging.”

GW’s Wright agrees, noting that Sativex’s approval in two dozen countries helps to validate the idea that cannabis-derived pharmaceuticals are viable. But he also sounds a note of caution. “We’ve shown that we can overcome all the obstacles in turning a component from the cannabis plant into a recognized drug, [but] it’s taken us 14 years to get here. Everyone else is just starting.”