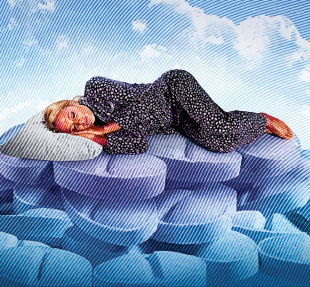 © ISTOCK.COM/GEORGE PETERSIn the early 1970s, a colleague of Stanford University’s William Dement remarked on the resemblance of a narcolepsy patient’s symptoms to those of a recent canine patient he had read about. The similarity of the symptoms—excessive daytime sleepiness, sudden switch from an awake state to rapid eye movement (REM) sleep, sleep paralysis, and muscle weakness called cataplexy—prompted psychiatrists at the center to track down a narcoleptic dog of their own to study, and then to gather a kennel full of such dogs to figure out what caused the disease. When Dement bred two affected Doberman pinschers in 1976, he found that their narcolepsy was genetic; many of the puppies had episodes of muscle cataplexy and would collapse into sudden sleep, especially when excited.

In 1986, Emmanuel Mignot came to Stanford to work with the narcoleptic dogs, first to evaluate the effects of different narcolepsy drugs and...

“The biological basis for orexin mediating wakefulness was pretty strong,” says Joseph Herring, neuroscientist and executive director of the clinical neuroscience program at Merck Research Laboratories. And if lower levels of orexin were associated with less shut-eye, perhaps stimulating the pathway could restore normal sleep, he adds. “If you antagonize the downstream [orexin] receptors with small molecules, you may have an effective sleep therapy by dampening the wakefulness.”

In 2014, the Food and Drug Administration (FDA) approved the first orexin receptor antagonist, Merck’s suvorexant (Belsomra), and at least two more drugs of this class are currently in clinical trials. Previous sleep medications acted as sedatives, targeting GABA receptors to facilitate brain inactivity. Suvorexant, on the other hand, decreases wakefulness by blocking the brain’s orexin receptors. “The orexin system is a super candidate as a target for insomnia treatment,” says Michael Perlis, director of the Behavioral Sleep Medicine Program at the University of Pennsylvania. “There are lots of reasons to believe some people with insomnia are hypersecretors of orexin, which is why they can’t sleep. Toning down orexin is a brilliant idea.”

As many as 40 million people in the U.S. experience some form of insomnia, making it the most common sleep disorder. Sufferers can have trouble falling asleep, staying asleep, or returning to sleep after waking in the middle of the night, and can experience persistent drowsiness, irritability, anxiety, and difficulty learning and remembering the next day. When chronic, insomnia can impede daily functions and increase the risk of cardiovascular disease.

Insomnia used to be divided into primary insomnia, which is not linked to any other medical condition, and secondary insomnia, trouble sleeping due to an underlying condition such as depression or chronic pain. But in 2013, the American Psychiatric Association eliminated the two subtypes, hoping to bring clinical attention to the sleep disorder regardless of other clinical issues. “There is increasing evidence that insomnia can be a cause or consequence of depression and other issues,” says Charles Morin, a clinical psychologist who studies sleep and insomnia at Laval University in Quebec City.

None of the available sleeping pills are curative, and therapy with hypnotics is considered a form of palliative care.—Michael Perlis,
University of Pennsylvania

But researchers and doctors still distinguish between acute insomnia—short-term bouts of sleeplessness triggered by a stressful event such as an important exam or a job loss—and chronic insomnia, when someone does not sleep well at least three nights a week for three months. To treat acute insomnia, doctors often turn to drugs, such as zolpidem (Ambien). For chronic insomnia, sleep experts recommend combining a drug, to take the edge off initially, with cognitive behavioral therapy for insomnia (CBT-I), which focuses on relaxation training, sleep hygiene (e.g., limiting caffeine before bed), stimulus control, cognitive therapy (changing beliefs and habits to promote sleep), and limiting the amount of time spent in bed not sleeping. Most physicians treating chronic insomnia aim to phase out the drug as the patient begins to have a more regular sleep pattern (JAMA, 301:2005-15, 2009). “There is an ongoing evolution of therapy for insomnia,” says David Neubauer, an associate professor of psychiatry and behavioral sciences at Johns Hopkins School of Medicine and associate director of Johns Hopkins Sleep Disorders Center. “The use of hypnotic drugs [is] never more than an adjunct therapy.”

David Cunnington, a physician and director of the Melbourne Sleep Disorders Centre in Australia, and colleagues found in a recent meta-analysis that CBT-I is effective; patients treated with CBT-I took an average of 19 fewer minutes to fall asleep and slept for an extra 26 minutes (Ann Intern Med, 163:191-204, 2015). But CBT-I can be expensive and difficult to access, and can require as many as eight sessions with a certified physician. To broaden insomnia patients’ access to CBT-I, researchers have created at least two commercial online programs backed by scientific evidence—SHUTi (Sleep Healthy Using the Internet), developed in collaboration with Morin, and Sleepio. “These may not be as effective as therapist-delivered CBT-I but are more effective than self-help,” says Cunnington.

Still, the easiest form of insomnia treatment, at least in the short term, is a drug. Benzodiazepines (also known as “benzos” or “bennies”), discovered in 1955, were the first class of drugs used as sleeping pills. These agents, of which temazepam (Restoril) is now the most commonly prescribed for insomnia, bind to GABA receptors to enhance the sedative effects of the neurotransmitter. By the 1970s they had replaced the use of barbiturates, which also target the GABA system. Although effective at increasing total sleep time in some, benzos—also used to treat anxiety, panic disorder, and other psychiatric disorders—decrease the amount of time in those stages of sleep that are associated with cognitive restoration. “Often people with insomnia are desperate for more minutes of sleep, thinking that is what will result in them feeling better,” says Cunnington. “Yet no study of benzos has shown improvements in daytime functioning, even though they increase sleep length.” The drugs can also be abused.

A newer class of GABA receptor agonists, the so-called Z-drugs, was approved for insomnia in the 1990s. These agents, including zolpidem, zaleplon, and eszopiclone, are chemically different from benzos: they tend to be more readily absorbed for faster sleep onset, and they have a shorter half-life that decreases next-day grogginess. The range of half-lives of these newer hypnotics gives clinicians good choices to customize the sleep aid based on sleep-disturbance pattern and other patient characteristics, says Neubauer. But, while Z-drugs “appear to improve sleep quantity without impairing sleep quality, they can also cause memory impairment, and some clinicians remain concerned about the drugs’ safety profiles,” adds Perlis (BMJ Open, 2:e000850, 2012).

Like benzos, Z-drugs are effective for some insomniacs, but for others they decrease the amount of certain stages of sleep and can lead to a lack of concentration as well as memory impairment. Other agents approved as sleep medications include melatonin receptor agonists, antihistamines, and antidepressants, but these have limited efficacy, according to most sleep experts.

“We’ve come to understand the physiology of insomnia better. For some it has to do with overactivation of the alertness system rather than a problem with the brain’s sleep-promoting system,” says Cunnington. “Something that blocks the alerting system, as suvorexant does, may be a better fit than [GABA-targeting drugs] that promote components of the brain’s sleep system.”

Suvorexant, approved by the FDA in August 2014, is a dual orexin receptor antagonist (DORA), meaning it binds to orexin receptors 1 and 2. In a long-term study, 521 patients who received 40 mg of the drug nightly (30 mg for those older than 65) for 12 months took less time to fall asleep and stayed asleep throughout the night (Lancet Neurol, 13:461-71, 2014). And while suvorexant can slightly increase the duration of REM sleep, the drug maintains the sequence and cycling of the REM/non-REM stages typical of normal sleep.

Initially, there were concerns that drug doses that dampened most orexin activity could lead to cataplexy or narcolepsy-like symptoms, says Matthew Ebben, a psychologist at the Weill Cornell Medical College in New York City. But according to the company’s clinical trial data, there were no signs of these side effects in the trial participants, though some did experience next-day sleepiness and a few rare cases of sleep paralysis not linked to narcolepsy. As a result, the FDA approved administration of the drug only at the two lowest (15 milligrams and 20 milligrams) of the four doses tested in the Phase 3 trials, and, subsequently, at two doses that are even lower (5 mg and 10 mg).

At least two other orexin receptor–targeting drugs are now in development. Tokyo-based Eisai and Connecticut-based Purdue Pharma are set to begin a global Phase 3 trial with a DORA called lemborexant. And Belgium-based Janssen Pharmaceutica NV, a Johnson & Johnson company, is teaming up with Massachusetts-based Minerva Neurosciences to test JNJ-42847922, an orexin-2 single receptor antagonist (2-SORA). Also known as MIN-202, the drug is being evaluated for insomnia in a Phase 1 trial of patients who also have major depressive disorder as well as in a Phase 2 study of insomnia patients without comorbidities.

Whether it’s better to target the two orexin receptors or just one remains to be determined. While DORAs typically result in faster REM sleep onset and slightly increase the total amount of REM sleep, rodent studies have shown that orexin receptor 2 mediates most of orexin’s sleep effects. Targeting orexin receptor 1, for example, does not appear to improve animals’ ability to fall asleep (Neuron, 38:715-730, 2003; JPET, 330:142-151, 2009). But 2-SORAs may not increase total REM sleep time to the same extent as suvorexant, says Neubauer. “There is a lot of debate right now on the potential risks and benefits of DORAs versus 2-SORAs.”

Even as more orexin-targeting sleep drugs make it to market, a fundamental challenge to treating insomnia remains: the risk of psychological addiction. Most clinicians prescribe insomnia pills to be used sparingly, only a few times per week. “But this is a disaster because on the nights the patient doesn’t take the pill, he expects to sleep poorly, and learns that he can’t sleep without a pill,” says the University of Pennsylvania’s Perlis. In a recent pilot study of 55 individuals, Perlis and his colleagues found that those who took a placebo on nights they would have skipped a dose maintained the effect of the sleeping drug and felt more rested (Sleep Med, 16:1160-68, 2015). On nights without a pill, those who followed the standard intermittent dosing slept more poorly and had next-day insomnia symptoms.

The results point to the need for smarter approaches to insomnia treatments that tap into what is known about human behavior and psychology. “Insomnia is complex and heterogeneous, and patients have different degrees of response to interventions,” says Herring.

Even with the new class of orexin-targeting drugs, doctors who work with sleep-disorder patients still see medication as playing a supportive role to CBT (and possibly its more readily accessible self-administered versions). “None of the available sleeping pills are curative, and therapy with hypnotics is considered a form of palliative care,” says Perlis. “Only CBT-I appears to confer durable results lasting months and years after treatment is discontinued.”

Most importantly, there is still a need for recognition of insomnia as a clinical condition. “We need to stop trivializing insomnia,” says Morin. “There is clear evidence that it’s a significant health problem—a risk factor for depression, hypertension, and other medical conditions. Doctors need to pay attention to it, and there are effective treatments available.”