The midwestern state has quietly laid the groundwork for a biotech hub.

Sarepta Therapeutics’s outpost in Ohio occupies a collection of offices and labs on the second floor of a large, squat structure known as “Building 4” in a business park outside of Columbus. Despite the facility’s unassuming exterior, the start of research onsite here in spring 2019 marked a milestone in Ohio’s two-decade-long march toward becoming a gene therapy hub. “We’re making a very significant commitment and investment in Columbus,” Doug Ingram, the CEO of Cambridge, Massachusetts–based Sarepta, told Columbus Business First in an article about the new division. “There is a real chance Columbus, Ohio, could become the most important place in the world for gene therapy development.”

We’ve helped prove the concept that gene therapy can actually go from bench to bedside.

With its Ohio research center, Sarepta...

We’ve helped prove the concept that gene therapy can actually go from bench to bedside.

With its Ohio research center, Sarepta joins a local gene therapy ecosystem. Bolstered by academic research at Columbus’s Nationwide Children’s Hospital and Cincinnati Children’s Hospital along with public and private funding, the state has spawned several gene therapy startups in the past decade, and bioscience firms currently employ about 75,000 people across Ohio as a whole, according to the industry group BioOhio. But Sarepta’s move marked the first time an established biotech has opened a gene therapy research center in the state, attracting attention and, observers hope, future investment in Ohio’s nascent gene therapy industry. 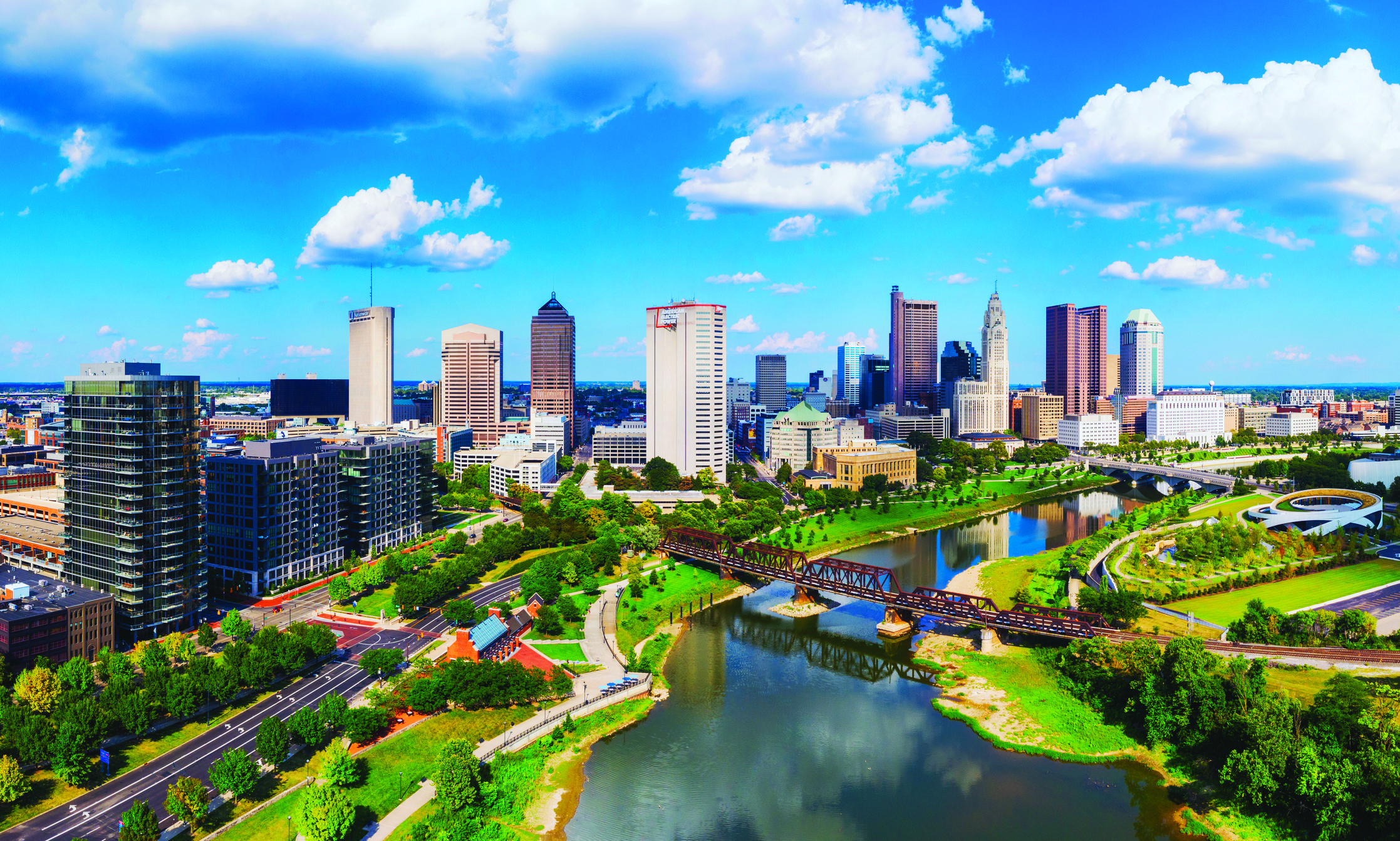 THE CENTER OF IT ALL: Columbus is home to Nationwide Children’s Hospital, whose Center for Gene Therapy has provided the starting point for many new gene therapy products in the last decade.
© istock.com, pawel.gaul

Getting in on the ground floor

Most of Ohio’s commercial gene therapy research programs got their start at Columbus’s Nationwide Children’s Hospital, which launched its Center for Gene Therapy in 2002. It was a risky decision, given the death of 18-year-old Jesse Gelsinger just three years earlier, after the teenager had a severe immune response to a gene therapy for a rare metabolic disorder during a clinical trial run by the University of Pennsylvania. The incident prompted many institutions to put the brakes on their gene therapy programs, but Nationwide opted to bolster its investment, developing treatments that use vectors other than adenoviruses—which had triggered Gelsinger’s immune reaction—to deliver the gene-modifying machinery.

A pivotal figure in the center’s research is neurologist Jerry Mendell, who has for decades worked to develop adeno-associated viruses (AAVs) as vectors for gene therapies that would treat muscular dystrophies and other neuromuscular diseases—first at Ohio State University, an affiliate of Nationwide, and then, from 2004, at Nationwide itself. Mendell and Nationwide’s leadership shared a vision “for investing in and building a true bench-to-bedside translational infrastructure for gene therapy,” says Matt McFarland, Nationwide’s vice president of commercialization and industry relations. To that end, Nationwide went on to recruit other top gene therapy researchers and to build its own clinical manufacturing facility for making gene therapy treatments that could be used in clinical trials.

I think Sarepta’s presence is going to help create an ecosystem here.

With the ability to perform its own early-stage trials, thanks to treatments made in-house and staff dedicated to regulatory tasks such as filing investigational drug applications, Nationwide was able to “de-risk” its discoveries, McFarland says, by gathering preliminary clinical data and thus moving discoveries closer to market. This de-risking makes the prospect of licensing Nationwide’s products for commercialization more attractive to companies. “We’ve helped prove the concept that gene therapy can actually go from bench to bedside,” says Dennis Durbin, Nationwide’s chief scientific officer. “We are one of a small number of leading institutions that have really taken it across the finish line,” he adds, referring to the 2019 approval of Novartis’s Zolgensma, a gene therapy for spinal muscular atrophy that stemmed from findings made by Mendell’s team.

So far, five startups have been launched in Ohio and elsewhere based on prospective AAV-based therapies developed at Nationwide. Collectively, the companies are developing treatments for 16 conditions, McFarland says. The technology transfer office he heads, which tries to find companies to license and commercialize therapies currently in development, has expanded from 3 staffers to 11 since he joined the hospital in 2012, he adds.

According to entrepreneur Mike Triplett, who helped launch the Columbus-based startup Myonexus in 2017 based on technology licensed from Nationwide, the hospital has grown into one of the “foundational pillars” of gene therapy research, along with the University of Pennsylvania and its affiliated Children’s Hospital of Philadelphia, and the University of North Carolina School of Medicine. McFarland says the hospital’s current position owes much to its earlier decision to stick with gene therapy when the technology’s future was far from certain. “Because we had made all those investments when gene therapy was still a potentially risky proposition . . . it put us in a place where now we have the responsibility and the opportunity to be leaders in the gene therapy space.”

Ohio’s first gene therapy startup, Milo Biotechnology, launched in 2012 in Cleveland, just a couple of hours’ drive north from Columbus. The company, whose sole employee is its chief executive officer, Al Hawkins, is collaborating with Mendell and others at Nationwide on a few small clinical trials testing a treatment, licensed from the hospital, for a form of muscular dystrophy.

In 2013, another startup, Abeona Therapeutics, also launched in Cleveland based on technologies developed at Nationwide. Abeona has clinical-stage gene and cell therapies for the connective tissue disorder recessive dystrophic epidermolysis bullosa and for Sanfilippo syndrome, in which a buildup of toxic sugars in the body causes neurodegeneration and death. The company is also conducting preclinical studies on treatments for several other disorders.

Abeona opened its own manufacturing center in Cleveland last spring to produce the therapies needed for its clinical trials. A Phase 3 clinical trial of its treatment for epidermolysis bullosa began recruiting in January 2020.

In 2017, a few years after Abeona’s founding, Triplett and Nationwide researcher Louise Rodino-Klapac cofounded Columbus-based Myonexus based on gene therapies that Rodino-Klapac’s team had developed for five different forms of a neuromuscular disease called limb-girdle muscular dystrophy. In mid-2018, Rodino-Klapac left Nationwide to join Sarepta as vice president for gene therapy. The biotech had partnered with Myonexus from its inception and last year bought the startup for $165 million. While Rodino-Klapac had personal reasons for wanting to stay in the Columbus area after leaving Nationwide, she says it was also “what’s best for the technology,” given the site’s proximity to the hospital and her ability to recruit members of her old research team to Sarepta’s new gene therapy research center, which she heads.

There is a real chance Columbus, Ohio, could become the most important place in the world for gene therapy development.

Three of the company’s limb-girdle treatments are now in small Phase 1 clinical trials, and a Duchenne muscular dystrophy therapy that Sarepta licensed in 2017, also developed by Rodino-Klapac’s team while she was at Nationwide, is being tested in a Phase 1/2 trial with 40 patients. An earlier, four-patient trial of that therapy “showed significant promise,” Rodino-Klapac says. She adds that there’s preclinical research in the works on other treatments that the company isn’t yet ready to talk about.

The relatively humble office-park home of Sarepta’s gene therapy research center is temporary; the company is building a new 85,000-square-foot facility, expected to be ready later this year, in another Columbus suburb. Rodino-Klapac says she hopes that the company’s Columbus outpost will help seed an expanded local gene therapy hub. Speaking with people at companies in other states, she is often asked: “‘Sarepta’s in Ohio—what are we missing?’” She takes it as a good sign. “I think [Sarepta’s presence is] going to help create an ecosystem here . . . for the gene therapy and biotech space and maybe beyond that.”

Nationwide’s McFarland says he thinks Ohio has much to offer companies. For example, state government–fostered initiatives such as Rev1 Ventures offer services to entrepreneurs in the Columbus area, and Nationwide has partnered with the state to offer seed-funding programs for early-stage companies. The low costs to operate in Ohio, relative to more established, coastal hubs such as Boston, are another plus, says Severina Kraner, the director for health care at JobsOhio, a nonprofit company working to boost industry in the state. Moreover, Kraner adds, the state is home to large research institutions such as Case Western Reserve University in Cleveland, Ohio State in Columbus, and the University of Cincinnati, providing a rich source of researchers to be recruited to up-and-coming biotechs.

The growth of gene therapy in Ohio is also aided by changes in the industry more generally. From an investor’s point of view, the outlook for gene therapy itself has changed, says John Rice, the director of life sciences at Ohio-based venture capital firm Cincytech, making it less important that particular therapies be de-risked by academic institutions before being picked up by industry. His company provided start-up funding for Myonexus in 2017, and having clinical-stage technologies developed at Nationwide “made a big difference,” he says. “We could get in with some confidence that we’re going to see some value for our investment.” But now his firm is more willing to consider projects still at the preclinical stage, Rice says—in fact, in order to invest in novel gene therapies, investors have to do so. Today, “anything that was clinical stage, here or anywhere else, has already been partnered out—a company’s created it and is moving along.”

Developments outside Ohio have of course contributed to gene therapy’s maturity as a therapeutic strategy, and not all treatments created in the state have stayed there. Zolgensma (onasemnogene abeparvovec), for example, a therapy for spinal muscular atrophy that received FDA approval in May 2019, originated in research at Nationwide and was developed in the Chicago area by a startup and later by Novartis. And Amicus Therapeutics, which acquired several of Nationwide’s gene therapy technologies for rare metabolic conditions in 2018, is based in New Jersey and has a gene therapy center in Philadelphia. For McFarland, having commercialization proceed in other states is not a problem. When considering potential licensees for each of the hospital’s technologies, he says, his team asks, “What is the best for this asset? And what gives this asset the best chance of having an impact on patients? And every once in a while, that’s not going to be here.”

Yet McFarland and others think that in the coming years, many gene therapy companies will find that Ohio offers them the conditions they need to thrive. Based on confidential conversations she’s had with business leaders, Kraner says she hopes to see more companies crop up in the state within the next year. Looking forward, she says, “I think there’s going to be continued investment and opportunities to attract and grow [gene therapy] companies.”

Clarification (February 13): The original version of this article stated that the FDA had requested more data before allowing a Phase 3 clinical trial of an Abeona Therapeutics investigational drug to proceed, and that shareholders had filed a lawsuit against the company for allegedly misleading them. However, the FDA removed the clinical hold in December 2019, and according to Abeona, the shareholders have withdrawn their lawsuit. The Scientist regrets the omission.