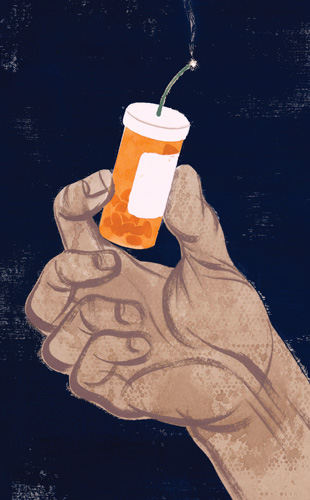 © ALEX NABAUMVioxx was on the market for 5 years before manufacturer Merck voluntarily withdrew the arthritis medication in 2004 due to an increased risk of heart attacks and strokes. An estimated 88,000–139,000 Americans had heart attacks while taking Vioxx, and as many as 55,000 died. Soon after, other painkillers in the same class of medicines came under scrutiny, including Bextra, which Pfizer removed from the market in 2005 upon the recommendation of the US Food and Drug Administration (FDA).

Americans cried out for better oversight of approved drugs. Then, in 2007, a cardiologist in Cleveland showed that Avandia, a blockbuster antidiabetic drug, increased the risk of heart attacks. An FDA advisory committee reviewed the evidence and found the claim to be true, but voted to keep Avandia on the market because of its efficacy, while mandating that the drug carry the FDA’s strictest warning label. The cries...

Today, almost a decade since Vioxx was taken off the market and 6 years since Avandia made headlines, the national system for monitoring approved drugs has not gotten any better, critics say—despite the 2007 FDA Amendments Act (FDAAA) that granted the agency more power to oversee drugs once they hit the market.

“I don’t think there have been any significant changes,” says David Resnik, a bioethicist at the National Institute of Environmental Health Sciences. “I don’t think anything has improved at all.”

Postmarket drug safety is a hot-button issue not only because of high-profile drug scares, but also because of accelerating efforts to get drugs to market sooner. Last July, for example, Congress passed the Food and Drug Administration Safety and Innovation Act, which among other things created a new designation called a “breakthrough therapy.” Though the details of the new designation are still being worked out, it is considered one step above “fast track” status, and mandates that the FDA work closely with drug developers to expedite a breakthrough drug’s path to the clinic. A handful of experimental drugs have been granted the status, and at least one company, Vertex Pharmaceuticals, is launching shorter-than-normal Phase 3 trials—24 weeks instead of 48—for a combination of two cystic fibrosis drugs that received the designation in January.

“You have this push for drugs coming through the pipeline sooner from both market forces and unmet medical need,” says Ruth Faden, founding director of the Johns Hopkins Berman Institute of Bioethics.

That push, however, has not been balanced with adequate effort to track the safety of drugs in the marketplace, says Xianglin Du, an epidemiologist at the School of Public Health at the University of Texas Health Science Center at Houston. “At the moment, no one is satisfied with the current system. We need to improve this system for the safety of all people, to identify risks earlier and in a timely manner.”

The number of adverse events reported to the FDA has dramatically increased over the last decade, from roughly 200,000 reports in 2001 to 900,000 in 2012. But adverse events themselves are not a failure of the drug-approval system, experts note. “It’s impossible—no matter how good or how phenomenally careful the system is from the manufacturer to the regulator—[to] have all the information we need about the benefit-risk ratio of a drug at the end of the premarket phase,” says Faden. Clinical trials include only 500 to 3,000 patients, so the full range of a medication’s side effects is not likely to be revealed until it is used by the general population, which includes people typically excluded from clinical trials, such as those with comorbidities, pregnant women, and senior citizens. FDA approval of a drug is therefore not a gold stamp of safety, Faden emphasizes, but a point on a continuum when the FDA makes a judgment call that the benefits of a drug outweigh its risks.

“The central issue, that we approve drugs based on incomplete information, is not a flaw,” says Brian Strom, a professor of biostatistics and epidemiology at the University of Pennsylvania Perelman School of Medicine, “but it means that inevitably there will be problems that emerge.” The goal of postmarket drug safety monitoring, therefore, is not to prevent adverse events from happening, but to detect them early and efficiently, making adjustments when required.

However, the current system depends on spontaneous, voluntary reporting—pharmaceutical companies, consumers, and health-care professionals voluntarily report adverse events to the FDA through a reporting system called MedWatch—and any voluntary system is prone to vast underreporting. “[MedWatch] likely misses over 90 percent of people with concerns,” says Du.

One way to more thoroughly detect a drug’s side effects is to go looking for them—for example, by scouring electronic medical records. In 2011, Du and colleagues demonstrated the feasibility of this approach using electronic Medicare claims data. In a study of 19,478 women aged 65 or older, the team tracked whether women with breast cancer had an increased risk of heart disease when undergoing chemotherapy that included a class of drugs called anthracyclines. They found that this type of chemotherapy increased the risk of heart failure by 25 percent, but had no effect on other types of heart disease (Cancer, 115:5296-308, 2009). “Electronic data allows you to do a lot of things that you can’t do with traditional medical charts,” says Du, such as getting rapid access to real-time health information and maintaining records even when patients move or switch providers. (See “Researchers, Hire Hackers,” page 26.)

Indeed, the FDA’s own project, a national electronic system called Sentinel, proved useful in investigating whether a new blood thinner, called dabigatran (Pradaxa), shared the same risk of serious bleeding as the already available warfarin, or whether the new drug’s risk was higher. Through MedWatch, the FDA received many reports of bleeding associated with Pradaxa, but was unable to conclude whether the number of reports was higher than expected. Using the Sentinel system, the FDA determined there was no higher rate of bleeding than warfarin, but did put out a safety announcement in December 2012 that Pradaxa should not be used by patients with mechanical heart valves, who were more likely to experience strokes, heart attacks, and blood clots on Pradaxa than on warfarin.

“In olden days, we would have had to launch a full-blown epidemiologic study to do this,” says Gerald Dal Pan, director of FDA’s Office of Surveillance and Epidemiology (OSE). “What we were able to do with Sentinel was query the system and use population-based data . . . to find out who had bleeds or hemorrhage.”

Launched in 2008, FDA’s pilot version of Sentinel, Mini-Sentinel, now includes data from 110 million individuals collected from numerous health-care sources and compiled by the Harvard Pilgrim Health Care Institute, a research arm of the not-for-profit insurance provider. But so far, Sentinel has only been used to track suspected adverse events, not to identify new ones. Indeed, this seems to be a general limitation of such reporting systems. In 2010, a team at Brigham and Women’s Hospital in Boston developed a system to send automated reports straight from a doctor’s note entered into an electronic medical chart to the FDA. A group of 26 clinicians, who had submitted no adverse event reports in the prior year, filed 217 reports in 5 months using the electronic reporting system (Pharmacoepidemiol Drug Saf, 19:1211-15, 2010). Yet when Dal Pan and his team at the FDA reviewed those reports, the data within them were often conflicting or lacking, and most reported events were not serious and were already noted in labels for the associated drugs (Pharmacoepidemiol Drug Saf, 21:565-70, 2012). “We felt it was a good proof of principle, but can these systems be used to tell us new things, things we don’t already know?” Dal Pan asks.

After the 2004 withdrawal of the widely prescribed Vioxx, the FDA asked the Institute of Medicine of the National Academies (IOM) to evaluate the US postmarket safety-monitoring system. The resulting IOM report called for increased FDA staff and organization on the postapproval side. “The FDA spends an enormous amount of effort and resources on approvals and getting drugs out,” says Strom. “It needs to spend more on doing studies of drugs after marketing.”

In response, the FDA launched the Safety First initiative, which instituted internal operational frameworks to give premarketing and postmarketing safety equal focus, and Dal Pan grew the OSE staff from about 130 in 2005 to 250 today. “We’ve been making a lot of changes in postmarket drug safety for the last several years,” he says.

FDA hearings about a postmarket clinical trial of Avandia spurred the agency to request a second assessment from the IOM, which subsequently produced a second set of recommendations in May 2012. This time, a key suggestion was that the FDA create a better system for tracking individual drugs. “There’s no single place you can go, on the FDA website or otherwise, to find out all the relevant safety and efficacy data on a particular drug at a particular moment in time,” says Steven Goodman, associate dean for clinical and translational research at the Stanford University School of Medicine and cochair of the IOM panel.

The IOM recommended that the FDA create a benefit-and-risk assessment and management plan, or BRAMP, for every approved drug: a single, publicly accessible document that would detail safety issues and postmarketing studies as a way to continually weigh the drug’s benefits against its risks. “If the FDA itself was doing this, it could stay on top of things, instead of waiting for a fire to break out,” says Goodman.

But the FDA has not instituted such a system. “For us to prepare all those documents would be quite a lot of work, and we’re using our resources in different ways,” Dal Pan says. It might be possible, he notes, for drug manufacturers to take on such a task, but such company-prepared reports would be confidential, not publicly available.

Another major recommendation from the 2012 IOM report was for the FDA to require more and earlier postmarket studies. “Right now, [the FDA] mounts studies when a crisis occurs, which is too late anyway,” says Strom. In 2007, the FDA ordered the TIDE trial, a randomized postmarket clinical trial comparing Avandia with Takeda Pharmaceutical’s rival drug Actos, after the initial evidence of Avandia’s potential dangers was published. The trial was halted in 2010 after additional studies confirmed Avandia’s risks, which raised ethical concerns about knowingly giving patients a potentially dangerous drug.

But a postmarketing study doesn’t need to be randomized trials like the TIDE trial, which are costly and raise ethical questions, says Goodman. Instead, the FDA could simply require that companies start gathering data on the outcomes of patients taking their new drugs right after approval, increasing the chances of catching adverse events early. These observational studies should at least be done for drugs of heightened concern, such as those with demonstrated risk factors during clinical trials or those likely to be widely used for common, chronic conditions, says Goodman.

In addition, the FDA should require more long-term observations of drugs’ effects, says Resnik. The current postmarketing system is geared toward detecting acute drug reactions, yet some adverse reactions don’t show up until 5, 10, even 20 years later.

“It’s a human system in the end, and we’re not going to be able to make it perfect,” says Faden. From voluntary reports to electronic health-care records, from randomized trials to observational studies, adds Dal Pan, “there’s no one-size-fits-all for what we need to do.” 