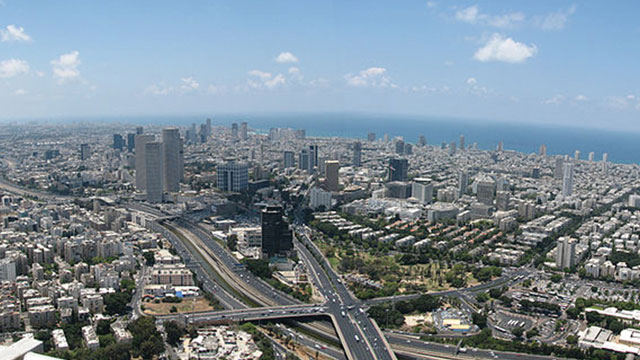 In 2010, Daniel Teper, a New York-based biotech consultant and former executive with GlaxoSmithKline and Novartis, approached Simon Benita, dean of the School of Pharmacy and head of the Drug Research Institute at Hebrew University of Jerusalem. Teper was interested in commercializing Benita’s new drug-delivery technology. The two entrepreneurs had worked together previously to start the successful France-based ophthalmology biotech, Novagali, but this time, Teper decided to establish the new venture in Israel.

“I was familiar with the environment of innovation and entrepreneurship in Israel,” says Teper, an American who had worked with Israeli companies in the past. He knew that Israel had low start-up costs compared to the United States or Europe, and a thriving community of angel investors. “In Israel, the amount of venture capital available per capita is phenomenal,” says...

Within months, Teper founded IMMUNE Pharmaceuticals in Herzliya-Pituach, a high-tech beach town just north of Tel Aviv, with $5 million raised primarily from Israeli investors, and licensed Benita’s technology. Today, the company has a thriving pipeline of monoclonal antibodies and a lead drug candidate for inflammatory bowel disease in a Phase 2 clinical trial. “When doing research in Israel, it’s just more efficient,” says Teper. “For every dollar that we invest, we get more for our money.”

Indeed, Teper isn’t the only one feeling the pull of Israeli biotech. According to the State of Israel’s Ministry of Industry, the number of life-science companies has grown from 186 in 1996 to more than 1,100 in 2012. “That’s enormous compared to the 7 million population of Israel,” emphasizes Yaky Yanay, chief financial officer of Pluristem Therapeutics in Haifa. Medical-device companies make up almost 50 percent of that pool, and Israel is number one worldwide in medical-device patents per capita. It is also a close second to the United States in biopharma patents per capita.

The last 15 years have been an incubation period, as entrepreneurs learned to navigate the life sciences, says Benny Zeevi, a managing general partner at DFJ Tel Aviv Venture Partners and cochair of Israel Advanced Technology Industries (IATI), an umbrella organization for Israeli high-tech and life-science companies. Today, more than 60 companies have products in Phase 2 and 3 trials, he estimates—far more than ever before in Israel’s history. “We are on the edge of a breakthrough decade for the biotech sector in Israel.”

Something old, something new 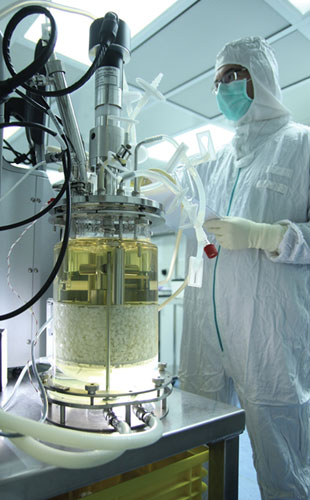 ISRAELI INNOVATION: Pluristem’s bioreactor system platform technology creates a three-dimensional microenvironment that allows for the large-scale growth of cells at a fraction of the cost of culturing cells in petri dishes or tissue flasks.COURTESY OF PLURISTEMIsrael’s biotech roots go back to 1901 with the founding of Salomon, Levin and Elstein Ltd., then a small business that distributed imported medications around Ottoman-controlled Palestine using mule and camel caravans. Today, the company, which now goes by the name of Teva Pharmaceutical Industries, is Israel’s largest pharmaceutical company and one of the top 10 pharma companies in the world. While Teva is known for generic medicines, it has also brought novel made-in-Israel compounds to market, including the blockbuster multiple sclerosis drug Copaxone and the Parkinson’s disease treatment Azilect.

Teva’s success has had a profound impact on the country. The company has brought local biotechs under its wing, for example, and groomed local management talent. But because the company remains focused on generics, it is unlikely that Teva executives will change their strategy to “become the next Roche or Pfizer” with a pipeline of novel compounds, says Yaacov Michlin, president and CEO of Yissum, the technology-transfer company of Hebrew University. Instead, he says, the key to success for biotech in Israel is starting a small company, then catching the attention of Big Pharma.

“When I go and speak to colleagues, everybody wants to innovate. Everybody wants to create something new,” says Adi Elkeles, chief technology officer of Micromedic, a cancer diagnostics company based in Tel Aviv. “The amount of small companies that exist in Israel is phenomenal.”

Jerusalem-based BioLineRx, for example, has only 50 employees, but boasts a pipeline of six clinical-stage therapeutics. Pluristem, with a staff of 140, has several placenta-based cell therapies in Phase 2 trials, including two for orphan drug indications, and hopes to begin Phase 3 trials soon.

The source of the innovation that seeds these companies, entrepreneurs agree, is the medical centers and seven universities in the country that offer advanced degrees, including Hebrew University of Jerusalem, the Weizmann Institute of Science, and Tel Aviv University. These institutions have become factories of novel life-science technologies and medical treatments. In fact, Weizmann, Hebrew, and Technion–Israel Institute of Technology, located within a mere 1.5-hour drive of one another, have among them seven blockbuster drugs on the market, notes Michlin.

But savvy businesspeople are also needed to commercialize good ideas from academia. In this, too, Israel is not lacking. In 2009, a best-selling book by Dan Senor and Saul Singer christened Israel the “Start-Up Nation,” a title that Israelis have fondly embraced. As the book chronicles, the country has experienced unparalleled success in the high-tech sector, founding hundreds of software and communications businesses, many of which have flourished. “When you look in the paper and every week you read about another company that’s been sold, it creates a certain atmosphere that you just want to join,” says Nadav Kidron, CEO of Oramed Pharmaceuticals, a lawyer who had no biotech experience prior to starting the company.

Most of his law-school peers do not work as lawyers but as executives at high-tech or biotech companies, says Kidron, who graduated in 2002. And entrepreneurs are likely to pursue technology companies rather than the next big retail store because Israel is limited in space and in its ability to sell goods to neighboring nations. Intellectual property, therefore, is a hot commodity in Israel—easy to transfer and sell in other countries.

And, most important to its success, the Israeli biotech sector has had a steady infusion of government money. A federal incubator program offers fledgling entrepreneurs, even those with just an idea, seed money of $425,000 to $680,000, to be paid back only upon the company’s success. Protalix BioTherapeutics, one of Israel’s oft-cited success stories, was the recipient of such a grant. Overall, the Office of the Chief Scientist, the government agency that distributes R&D funds, has an annual budget of $300 million distributed to an average of 1,000 projects proposed by 500 companies.

“The combination of government, academia, and industry has built a microenvironment to take so many ideas forward,” says Yanay. “We are on the way to building a strong and advanced biotechnology industry.” 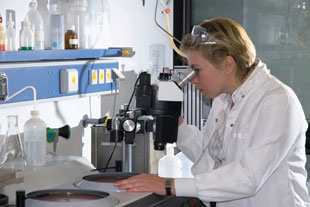 AT THE BENCH: In the lab at Oramed’s corporate and R&D headquarters in JerusalemCOURTESY OF ORAMED PHARMACEUTICALSLike a good son, Oramed Pharmaceuticals’ Nadav Kidron wasn’t afraid to take advice from his mother. A senior diabetes researcher at Hadassah-Hebrew University Medical Center in Jerusalem, Miriam Kidron was part of a team that developed a technology for the oral administration of insulin. Nadav Kidron recalls the time, a few years after he’d finished law school, that she came to him with an idea: “One day, she tells me, ‘Listen, son. We’ve had a breakthrough in the work we’ve been doing for years, and finally we’re at a point where this technology can be commercialized.’” Nadav Kidron, a savvy businessman, negotiated with Hadassah to take the technology out of the university and founded Oramed to bring the product to market. The company received more than $1 million in start-up funds from the Office of the Chief Scientist, then raised an additional $20 million from investors. Today, the company has completed Phase 1 and 2 trials, conducted primarily in Israel, and in May received approval from the US Food and Drug Administration (FDA) to begin a Phase 2 trial in the U.S.

But like most Israeli biotech CEOs, Kidron does not plan to take the drug all the way to the market. “At the end of the day, we’d like to partner with someone who has better marketing ability than ours, and we’ll stay behind the scenes with the R&D,” he says.

This is a common theme among Israeli biotechs, which, though strong in innovation, do not have the funds or expertise to get drug candidates through Phase 3 and onto the market. One of Israel’s most-cited biotech success stories exemplifies this trend. Last year, the FDA approved Protalix’s enzyme therapy for Gaucher disease, the first pharmaceutical to be made in a plant-cell culture manufacturing system. But to develop and commercialize the drug, Protalix partnered with Pfizer—and has already made a cool $98 million as a result.

“We are good at taking compounds into clinical stages 1, 2a, maybe 2b, but that’s it,” says Michlin. “We don’t currently have the capability, funding, or management experience to launch a full Phase 3 trial and to market a drug worldwide.”

“Israelis are serial entrepreneurs,” adds Teper. “They’re great at starting companies, but maybe they have less patience to scale up companies.” While an Internet company, for example, can go from a garage to international market in just a couple of years, biotechs require much more time and larger financial commitments. And though Israel has a booming venture capital community, Israeli investors are used to short- to mid-term investments, like those done for high-tech companies, says Michlin. Overall, there is a lack of late-stage funding to pay for expensive Phase 3 clinical trials or the costs to market a drug internationally.

Despite working on different timelines, Israeli biotech executives do look to the country’s successful high-tech sector for ideas about how to improve. Israel is home to large research centers for monster tech companies such as Google, Intel, General Motors, and more. Apple’s R&D center in Herzliya is the company’s only research site outside of the United States. The same model does not exist for biotech—at least, not yet.

When doing research in Israel, it’s just more efficient. For every dollar that we invest, we get more for
our money.
—­ Daniel Teper, IMMUNE Pharmaceuticals

Similar international research centers, established by large pharmaceutical companies, could make a big difference for Israeli science. “We really need the pharma companies to establish R&D centers in Israel, so the scientists and engineers here in biotech will learn how it’s done in large companies,” says Zeevi. As cochair of IATI, Zeevi is working with colleagues and the Israeli government to set up programs to attract these companies to the country, he says. “It would be another key component of building the life-sciences industry in Israel. We need that experience and knowledge.”

But while Israel boasts a well-educated and experienced workforce, large pharma companies may be turned off by its distance from the U.S. or by the perception of a hostile political environment, says Teper. However, if Israeli entrepreneurs can lure pharma representatives to the country for a visit, he adds, that misunderstanding is quickly dispelled. “You could be in California; it’s not that different,” Teper says. “I actually feel more secure sometimes [in Israel] than in the U.S. or Europe. There is no tension on a day-to-day basis.”

And Big Pharma is showing some interest. Four years ago, Roche partnered with Pontifax Funds, a life-sciences venture-capital fund in Israel, to identify ventures and technologies to add to Roche’s R&D portfolio. Last year Merck Serono, a division of the German pharma giant Merck KGaA, invested $13 million in a biotech incubator called Inter-Lab in Yavneh, Israel. While not necessarily the R&D center Zeevi was hoping for, Inter-Lab includes lab facilities and business support for 5–6 companies, Merck reported, and more than 130 biotech start-ups have applied for the program.

“Although we are a small country and not in Europe or the U.S., we are still on the map with all the big pharma companies,” says Michlin. “Once we have a good product or technology, we can find a partner and get it to the market.” 

Corrections (July 31): This story was updated from its original version to reflect that Teva Pharmaceuticals was originally founded in 1901 as Salomon, Levin and Elstein Ltd. The Scientist regrets the error.