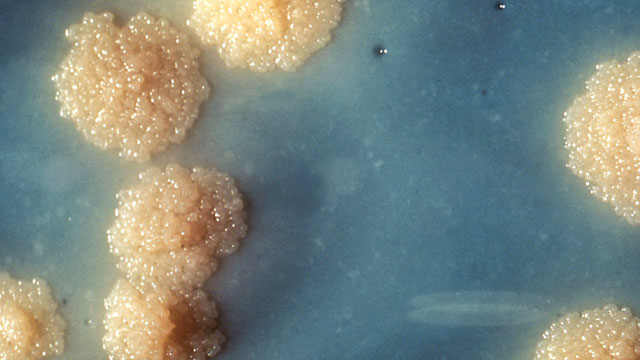 WORLDWIDE PATHOGEN: About one-third of the human population is infected with Mycobacterium tuberculosis (cultures shown above), some 13 million of which are actually sick with TB.CDC/GEORGE KUBICA

In 2009, an international consortium of researchers initiated an efficacy trial for a new tuberculosis (TB) vaccine—the first in more than 80 years. With high hopes, a team led by the South African Tuberculosis Vaccine Initiative inoculated 2,797 infants in the country, half with a vaccine called MVA85A and half with a placebo. They followed the children for up to three years and finally announced the result last February. It was not good news (Lancet, 381:1021-28, 2013).

“It did not work,” says Thomas Evans, president and CEO of Aeras, the Rockville, Maryland-based nonprofit that sponsored the trial. The vaccine did not protect children against the deadly disease.

The only vaccine currently available in the fight against TB is Bacille Calmette-Guérin (BCG), a live vaccine first used in 1921 and originally derived from a cow tuberculosis strain. Though the exact mechanism of the vaccine’s protection remains unclear, researchers do know that it doesn’t work well: it reduces the risk of a form of TB that is especially lethal to infants, but it does not reliably protect against TB lung infections, which kill more than a million adults worldwide each year.

With every cough or sneeze of an infected individual, TB bacilli fly through the air, and to date have spread to one-third of the world’s population. In most individuals, Mycobacterium tuberculosis (Mtb) lie dormant, never causing sickness. In others, however, the bacteria cause life-threatening lung infections. Some 13 million people around the world are actively sick with TB, and someone dies of the disease approximately every 20 seconds, according to the World Health Organization (WHO).

“The need for a TB vaccine is enormous,” says David Sherman, a tuberculosis expert at the nonprofit Seattle Biomedical Research Institute. And an inadequate vaccine is not the field’s only problem: the four main drugs currently used to treat tuberculosis are also decades old, take six months to rid the body of the bacilli, and are becoming obsolete due to the spread of multidrug-resistant and extensively drug-resistant TB. Despite the gloomy outlook, many researchers are still plugging away, through pharmaceutical-nonprofit partnerships and redesigned basic research efforts, to achieve a happy ending. 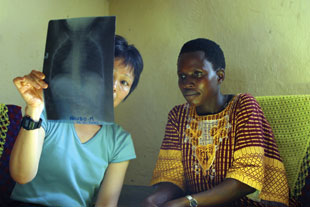 BATTLING TB: Paula Fujiwara (left) of the International Union Against Tuberculosis and Lung Disease speaks with a woman who is serving as the treatment supervisor of her 25-month-old child with TB.WHO/TBP/GARY HAMPTONTuberculosis has plagued humans for thousands of years. Even ancient Egyptians were ravaged by TB, as evidence from mummies has shown. And over those millennia, Mtb has learned to quietly, carefully live within the human body.

“It’s not just a pathogen; in some ways it’s commensal,” says Evans. “It’s been dealing with the human immune system for a long period of time and knows how to go latent and keep itself transmitted.” Of the roughly 2 billion people infected with Mtb, about 90 percent will never get sick, though they are a vast reservoir of the bacteria, fueling the epidemic. And when illness occurs, unlike many infections that involve an acute sickness as the host’s immune system battles the pathogen, tuberculosis infection resembles a chronic disease. “Everything about the infection is slowed down, frankly, in ways we don’t understand,” says Sherman.

E. coli, for example, replicates so quickly—about once every 20 minutes—that one cell can grow into a colony of a million overnight. Mtb, on the other hand, only doubles once every 20 hours, and would take three weeks to grow a colony of similar size. Additionally, the human immune system produces antibodies against most pathogens in roughly 5 to 7 days. Antibody production against Mtb takes three weeks, likely because the bacteria are slow to travel to the lymph nodes where an adaptive immune response commences. “TB is exquisitely adapted to long-term survival in a human host,” says Sherman.

The current TB drug regimen relies on a six-month treatment of four antibiotics, all discovered in the 1950s and ’60s and which primarily inhibit cell-wall and RNA synthesis. (See illustration.) Worldwide, about 3.6 percent of new TB cases and 20 percent of recurring infections are multidrug resistant, according to the WHO.

Mtb is not just a pathogen; in some ways it’s commensal.

Unfortunately, there isn’t a deep pipeline of drug candidates to fall back on. It wasn’t until December 2012, some 50 years after the last first-in-class approvals, that the US Food and Drug Administration approved a TB drug with a new mechanism of action. Janssen Therapeutics’ bedaquiline (Sirturo) inhibits an ATP synthase enzyme in the bacterium’s cell membrane to prevent the pathogen from generating energy and replicating. (See illustration.) No other anti-TB drugs are close to approval.

TB drug development has been slow for several reasons. For one, the drugs are difficult and expensive to make, and they are primarily needed in developing countries that can’t afford to pay top dollar for a six-month drug regimen. “Working in TB will not drive profit for pharmaceutical companies,” says Manos Perros, head of AstraZeneca’s Boston-based Infection Innovative Medicines Unit. As a result, most recent TB drug development has involved collaborations between big pharma and government institutions or nonprofit advocacy organizations, as well as academia. These are “partnerships that bring resources and funding that make this kind of work, frankly, possible,” says Perros. “This is a space where competitions between pharma and academia are unfruitful.”

Other pharma companies share that sentiment. In February 2013, Glaxo-SmithKline (GSK) opened up the closely guarded doors of their laboratories to share information with the TB research community about 177 compounds from the company’s pharmaceutical library that appear to inhibit Mtb (ChemMedChem, 8:313-21, 2013). The set of compounds has already been sent to nine groups in the U.K., U.S., Canada, The Netherlands, France, Australia, Argentina, and India, according to GSK spokesperson Melinda Stubbee.

But even with this collaborative attitude, the research community has struggled to develop successful new TB drugs, in part because the bacterium hides latent inside cells such as macrophages, and unpredictably becomes active in different sites in the lung. “TB drug development is extremely challenging because a drug has to kill not only the replicating but the nonreplicating bacteria,” says Feng Wang of the California Institute for Biomedical Research in La Jolla. To tackle this problem, Wang, along with Peter Schultz at Scripps Research Institute, also in La Jolla, and William Jacobs at Albert Einstein College of Medicine in New York, used a novel screening method to test the effect of 70,000 compounds on a biofilm of Mtb that simulates the latent version of the bacterium. One compound popped out of the screen: TCA1 killed both replicating and nonreplicating Mtb (PNAS, 110:E2510-17, 2013). It appeared to attack on two fronts: preventing bacterial cell-wall synthesis and inhibiting a bacterial enzyme involved in cofactor biosynthesis, which is likely what makes it effective against nonreplicating Mtb. (See illustration.) The compound has since proven successful in both acute and chronic animal models of TB, and the team is tweaking the chemistry to try and make it even more potent, says Wang.

Pharmaceutical company AstraZeneca is similarly developing a drug that is active against latent bacteria. AZD5847, a type of antibiotic called an oxazolidinone that is typically used to treat staph infections, is able to reach and kill Mtb lodging inside macrophages. The company is currently testing the drug in a Phase 2 efficacy trial in South Africa involving 75 patients. But developing the compound wasn’t easy, notes Perros. “We’ve been investing for a decade. It really takes a long time.” 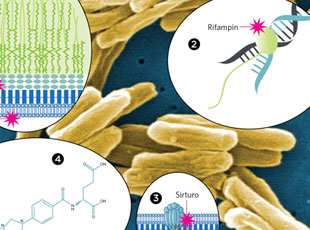 THWARTING TB: The traditional regimen for TB includes four antibiotics that primarily inhibit cell-wall synthesis and RNA synthesis. Now, researchers are looking for new ways to stop the bacterium.
See full infographic: JPG | PDFCDC/RAY BUTLER; ILLUSTRATION BY THE SCIENTIST STAFF; BASED ON NIAID/WIKIMEDIA COMMONSBut even if quick-acting, potent drugs were available, Mtb is so abundant and so well adapted to the human population that the only true path to eradication is not treatment, but prevention. “There’s no endgame without a vaccine,” says Aeras’s Evans. “No matter how much we think we should work on drugs or diagnostics, if we’re not working on vaccines, we’ll never get to our final goal.”

The failure of the MVA85A vaccine trial in South Africa last year was disappointing, but at least a dozen other TB vaccine candidates continue in clinical trials. Most of these reflect one of two general strategies for preventing tuberculosis: improve the existing BCG vaccine or, more commonly, boost its effect with a secondary vaccine. BCG, which is given to infants, primes the immune response early in life, so booster vaccines are usually designed to protect adolescents and adults from later infection. The MVA85A vaccine, for example, was a modified viral vector expressing Mtb antigen 85A designed as a booster to BCG.

Vaccine development, however, is hindered by lack of cellular or molecular markers that directly correlate with immune protection from TB, making it difficult to predict how well a vaccine might protect against TB based on the responses of a handful of individuals. “The only tool we have to make sure a vaccine works is a very large, very expensive field trial,” says Evans. And that high price tag, as in TB drug development, has turned numerous pharmaceutical companies off the pursuit of a TB vaccine.

But with financial and research support from nonprofit partners like Aeras—funded by the Bill & Melinda Gates Foundation, among others—a few companies are still in the game. In collaboration with Aeras, Sanofi Pasteur is developing a BCG booster vaccine that began Phase 1/2a safety trials in South Africa last July. It is a recombinant vaccine made up of two TB proteins fused together and coupled with an adjuvant called IC31, which really “drives the immune response,” says Sanofi’s Ryall. Aeras also has another big-pharma partnership with GSK on a vaccine called M72/AS01e, which has been in Phase 1 and 2 clinical trials since 2004, including an ongoing trial in Taiwan and Estonia. The vaccine combines a GSK recombinant antigen called M72, derived from two tuberculosis-expressed proteins, and a GSK adjuvant called AS01e. 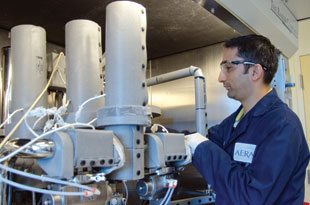 BLASTING TB: An Aeras employee works on the spray dryer, which creates TB vaccines in a powder form that can be delivered directly to the lungs.AERASWith TB drugs and vaccines still in early clinical phases, some scientists are going back to the basics to see if a better molecular understanding of the bacterium itself could assist these programs. “We need to develop vaccines, and we need to develop products, but as we do, it’s very clear that we need to be learning a lot more about the immunobiology [of TB],” says Evans.

Last July, for example, Sherman and colleagues published the first large-scale map of the bacterium’s regulatory and metabolic networks (Nature, 499:178-83, 2013). The team initially plotted the relationships of 50 Mtb transcription factors, and later, all 200, which control the expression of the rest of the bacterium’s genes. “Our hope is that by looking at it in this different way, we can describe different kinds of drug targets than we have ever done before,” says Sherman.

The team found that Mtb is remarkably well networked, so that if a mutation or drug stymies one gene or protein, others step in as backups, allowing the bacterium to continue functioning normally. But targeting transcription factors that control whole networks could shut down an entire system, backups and all. One such network already looks like a promising drug target—transcription factors controlling a group of proteins in the bacterium’s cell membrane that pump antibiotics and other drugs out of the cell. Mtb has so many such pumps that it is extremely difficult to target multiple pumps for treatment, but genes that activate numerous pumps at the same time are a far more promising drug target.

The idea that scientists will soon develop new, better TB drugs and vaccines “helps get me up in the morning,” says Sherman. It’s going to take more breakthroughs than are on the immediate horizon, he adds, “but if we keep at it, we will get there.” 