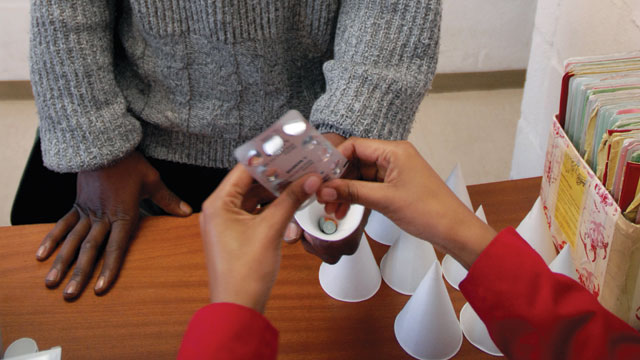 Living with a severe illness like cancer, HIV, or tuberculosis (TB) means taking many medications on a daily basis. With HIV, it’s a cocktail of antiretrovirals that target pathways for viral replication or entry into host cells. For TB, a slew of antibiotics strikes multiple blows to the infecting bacterial population in an attempt to eliminate even the most resistant individuals. And in cancer, chemotherapeutics are administered in layers, with different compounds attacking various facets of tumor growth.

Historically, clinical combination therapies have been cobbled together out of medicines that were approved for use individually. TB patients, for example, have been treated with a suite of antibiotics for more than 50 years, with substitutions and additions of approved medications being made to the regimen as the bacteria mutated and...

Recently, though, pharmaceutical companies have used increasingly sophisticated scientific insights into the biochemical pathways of disease to explore combination therapies before new drugs ever make it to market. Instead of devising drug treatments that pair two or more already approved medications, drugmakers are combining candidate compounds and validating their collective safety and efficacy in animal and in vitro studies before moving them into human trials.

“Combinations make more sense,” Daniel Von Hoff, physician-in-chief at the Translational Genomics Research Institute in Phoenix, Arizona, says of such therapies for cancer. Because inhibiting one tumor pathway often results in compensation by alternate pathways and the development of drug-resistant tumors, the field of oncology in particular has turned to drug combinations to fight disease. “We’re being smarter in the discovery of the pathways and smarter in the way that we’re hitting those pathways,” says Von Hoff.

“Combining agents that block multiple pathways in tumor cells is likely the future of targeted therapy in cancer medicine,” agrees Johanna Bendell, an oncologist and associate director of drug development at the Sarah Cannon Research Institute in Nashville. Bendell is a lead investigator at one of the three sites enrolling patients in a Phase Ib study of a combination therapy using two of California-based Genentech’s investigational compounds—a PI3K inhibitor and an MEK inhibitor. PI3K and MEK inhibitors target key protein kinases involved in tumor proliferation, survival, and the development of cancer. The combination shrank tumors in two melanoma patients, one subject with prostate cancer, and two nonsmall-cell lung cancer patients and appeared to halt the progression of tumors in three additional patients—all without serious side effects. “We are able to give these agents together safely, and we are seeing early signs of anticancer activity,” Bendell said at a national cancer meeting, where she announced the preliminary results in April.

To change the game in TB treatment, we have to start thinking of the unit of development as the multidrug combination.

The budding trend has compelled a number of rival pharmaceutical companies to join forces to conduct clinical research on therapies that combine experimental drugs developed by different competitors. Pharmaceutical juggernauts Merck & Co. and AstraZeneca paved the way in 2009 when they agreed to collaborate and share the costs of early clinical trials to test the solid-tumor fighting capacity of a combination therapy consisting of two candidate compounds. Last year, two more deals to test pre-approval drugs in combination were inked: GlaxoSmithKline teamed up with Novartis to test its MEK inhibitor with the Swiss company’s approved kidney cancer drug and another experimental cancer drug to treat various forms of cancer. And in December, Merck KGaA and Sanofi-Aventis announced that they would test a combination cancer therapy in Phase I clinical trials.

“Some of the agreements have taken a year to get in place,” says Von Hoff, “but they’ve actually got them up and running.”

Teaming up against TB

Oncology is not the only field that’s waking up to the potential of early-stage combination therapy testing. Researchers seeking novel tuberculosis therapies, which have involved administering a regimen of approved antibiotics, are switching gears to start testing combinations of candidate compounds in hopes of producing new, improved TB therapies in a streamlined way. “If we want to get really novel regimens that are going to change the game in TB treatment, we have to start thinking of the unit of development as the multidrug combination,” says Ann Ginsberg, chief medical officer at the Global Alliance for TB Drug Development. Late last year, the TB Alliance announced an initiative, with funding support from the Bill and Melinda Gates Foundation, the Critical Path Institute, the FDA, and nearly a dozen pharmaceutical companies, to conduct the first-ever clinical trial of a revamped TB drug regimen: one candidate antibiotic paired with two approved antibiotics currently used to treat TB, moxifloxacin and pyrazinamide. “Up until now, new regimens were made by substituting one new [approved] drug for an old one in the old regimen,” Ginsberg says. With clinical trials required for each substitution, the process can become “expensive and labor intensive,” she adds. “It takes forever if you really need a whole new regimen.”

The initiative launched by the TB Alliance, together with the announcements of several Big Pharma collaborations on early-stage trials for combination cancer therapies, spurred the FDA into action at the end of last year. Having never approved two experimental compounds in tandem, the agency issued a draft guidance in December outlining its advice to drugmakers developing two or more unmarketed investigational drugs for use in combination. “This represents a change in the way many drugs are going to be developed and drug therapy in general because we’re moving towards targeted therapy,” says Janet Woodcock, director of the FDA’s Center for Drug Evaluation and Research. “We felt we ought to make it crystal clear that that was possible.”

Combining agents that block multiple pathways in tumor cells is likely the future of targeted therapy in cancer medicine.

The document spelled out several ground rules for the development of such combination therapies. First, the therapy should target a “serious disease or condition.” Second, the biological rationale and preclinical justification for combining the agents must be robust—for example, evidence from animal or in vitro studies that two compounds target different nodes in the same metabolic pathway or inhibit the same target at two different binding sites. And third, drugmakers must show compelling reasons why the components of the combination would not make it through the clinical trial and approval processes individually—for example, because of the potential for patients to develop resistance to any of the drugs in isolation.

Woodcock adds that the agency has gotten a lot of positive feedback from the drug-development community, and many requests for further clarification and expansion of the guidelines. She says that the FDA is now working on drafting a final guidance, and that some issues, such as addressing the potential for off-label prescription of individual compounds within approved combinations, will have to be addressed at a later date.

Genomic insights have driven the clinical push towards combination therapies. Pharmacological benefits may be identified more efficiently, for example, if patient populations in antitumor drug trials can be prescreened for specific mutations and assigned to treatment groups in which specific inhibitors are more likely to hit their targets. “It’s becoming so much more commonplace to have sequence data on the patients,” says Lori Friedman, senior director of translational oncology at Genentech. Indeed, the company’s early trials of drugs that target PI3K and MEK pathways have been aided by the ability to identify patient tumors with mutations in the signal transduction gene KRAS, which have proven in preclinical studies of lung-cancer models to be more susceptible to the combination therapy. “This is really guiding us as to what kinds of questions we should be asking in the clinic,” Friedman says. Though increasingly sophisticated research is making the selection and targeting of the right steps in a disease pathway more likely, how best to conduct clinical efficacy trials of combination therapies remains somewhat unsettled, Friedman adds. “The biggest worry is how to prove that the single agents are not providing sufficient benefit,” she says. While preclinical work may suggest that a combo therapy is the best way to go, testing the drugs in tandem makes it difficult to parse the effectiveness of each compound individually. And because demonstrating that the combo is better than either component on its own is one of the FDA guidelines, Friedman continues, Phase II studies may require multiple arms that test each agent in isolation as well as in combination.

Furthermore, the FDA guidelines are just that. The agency currently has no established approval protocol for novel combination therapies, making the undertaking risky and potentially expensive. That, according to Troy Wilson, president and CEO of the California–based biotech Intellikine, is why Big Pharma is first to launch into the novel-combination-therapy arena. Larger pharmaceutical companies are better positioned to take on the initial risk because they can spread costs across their large portfolios, he says. However, thanks to biotechs’ ability to efficiently pull together specialized research teams, there could also be opportunities for such firms to conduct smaller-scale preclinical and early-phase studies, Wilson adds.

As the scientific and regulatory landscapes evolve to encourage the testing of combination therapies in novel ways, the very structure of the trials, and of the partnerships that form around them, are changing. The FDA’s Woodcock says she hopes to see even more collaboration between companies to bring about new and effective treatments and cures. “I personally hope that we develop independent consortia that can take in multiple compounds and test them alone and together, so that we’re not just talking about developing stand-alone trials for everything.”

Correction (June 6): The original version of this article did not credit Eric Miller (Panos) for the opening image. The mistake has been corrected, and The Scientist regrets the error.