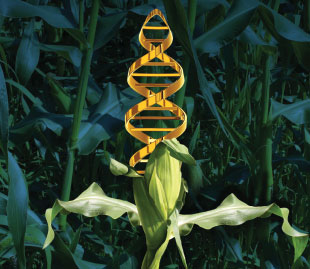 © ISTOCK.COM/WILDPIXELIn the early 2000s, cystic fibrosis researchers were frustrated with available mouse models of the disease. The mice carried the mutant version of the cystic fibrosis transmembrane conductance regulator (CFTR) gene that causes the disease in people, but the animals didn’t develop the mucus-coated lungs, coughing, or breathing difficulty observed in human patients. Researchers at the University of Iowa (UI) thought they might have a solution—genetically modified miniature pigs. In September 2008, the team published their results: the mutant pigs had defective transmembrane chloride ion transport, the molecular hallmark of cystic fibrosis that leaves human patients’ skin tasting salty. Additionally, the newborn pigs shared human CF infants’ defects in the intestine, pancreas, and liver (Science, 321:1837-41, 2008). It was later found that, unlike the mice, the animals developed CF-like lung disease within two months of birth (Sci Trans Med, 2:29ra31, 2010)....

Several factors aligned to make the mutant CFTR pigs possible. The pig was already a well-established medical research model, and its genome was being sequenced. It probably also didn’t hurt that the scientists were working in the U.S.’s top pork-producing state. Buoyed by their success in cystic fibrosis, the UI researchers thought pig models could help crack other human diseases for which mouse models had been inadequate. In collaboration with John Swart, then an executive director at Boehringer Ingelheim’s Iowa operations, they created a startup to commercialize the idea. Exemplar Genetics of Sioux Center, in northwestern Iowa, was born.

Iowa is “a really good place to emerge as a leader in biotech,” says Joe Hrdlicka, executive director of the Iowa Biotechnology Association, a nonprofit trade organization for the sector. The state has a competitive advantage in what Swart calls “value-added agriculture,” or products that build on primary commodities such as crops and livestock, partly due to the workforce: “You can hire staff who are very familiar with livestock, but who are highly educated and very interested in doing something that they see really makes a difference in the world,” he says.

Companies like Exemplar also benefit from private and government investment to keep innovative biotech in the state. Iowa spends 12 percent more than the national average on biosciences research, and UI and Iowa State University (ISU) plow some 67 percent of their research budgets into the sector. Together, these factors are giving rise to varied and innovative biotech ventures—from riffs on Iowa’s agricultural origins to new advances in human medicine and diagnostics that are unrelated to pigs and corn.

Iowa has long been blessed with agricultural bounty, which has made it the leading US producer and exporter of crops such as corn and soybeans. “We have the best soils in the world,” says Robert Brown, a biofuels researcher at ISU. The land’s productivity has been further boosted by many decades of academic and industry research; DuPont Pioneer, based in the Des Moines suburb of Johnston, recently celebrated 90 years of optimizing seeds to improve crop yields. Originally founded to serve Iowa farmers—many of whom still use its products—the company now develops hybrid and genetically modified seeds for global farming challenges, such as AQUAmax hybrid corn lines for water-limited environments and Plenish soybeans with no trans fats. Most recently, Pioneer scientists have used the CRISPR-Cas9 gene editing system to cut years off the production time of waxy corn hybrids, the raw material for cornstarch.

Iowa spends 12 percent more than the national average on biosciences research, and UI and Iowa State University (ISU) plow some 67 percent of their research budgets into the sector.

The company feels connected to its Iowa community, says Jerry Flint, vice president of industry and regulatory affairs:  Pioneer collaborates with smaller local firms at its Innovation Center and maintains close ties with nearby ISU in Ames. Specifically, Pioneer is part of the Cultivation Corridor initiative, set up by ISU and more than a dozen industry and civic partners in 2014 to attract investment in the state’s agricultural biotechnology businesses. And some of the country’s most productive acres fall within a 300-mile radius around the company’s main campus, says Flint—placing Pioneer researchers in close proximity to farmers growing the crops they’ve developed.

Iowan researchers are also branching out from traditional uses of their crops, finding new ways to turn that productive land into valuable commodities. The state’s biofuel industry, for example, has flourished thanks to government support, expertise in milling techniques, and an abundance of raw material. Post-harvest corn leftovers known as stover, which serve as a source of cellulose for the production of ethanol, can also be used to generate fossil-fuel alternatives. The Center for Biorenew­able Chemicals (CBiRC), a National Science Foundation–supported research center based at ISU, is developing chemical intermediates to replace petroleum-based products. CBiRC unites researchers from across the country and around the world, has partnered with more than 30 industry members, and has spun off ten startups in the center’s first eight years of operation.

The Iowa government is also supporting the biomaterials push; the state legislature recently passed the first state-level production tax credit for biobased chemicals other than biofuels. Beyond plastics and polymers, CBiRC Director and ISU professor of chemical and biological engineering Brent Shanks says that some of the high-value chemicals the center makes could serve as antimicrobials, and they are currently testing the insecticidal properties of some of their compounds against mosquitoes carrying the Zika virus. 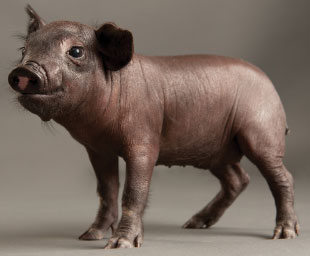 HERE PIGGIE: Exemplar Genetics of Sioux Center in northwestern Iowa develop lines of human-size “minipigs” that could serve as more-accurate models of human dis­ease.EXEMPLAR GENETICSThese innovative twists on agriculture are also giving rise to companies, such as Exemplar Genetics, that straddle the line between traditional Iowan industries and biomedicine. Ames-based animal vaccine producer Harrisvaccines is another example. Recently acquired by Merck as part of its animal health division, the company was launched in 2005 by then ISU professor Hank Harris and his postdoc Matt Erdman, who identified and sought to develop a vaccine from a wild strain of the devastating porcine reproductive and respiratory syndrome virus (PRRS). They teamed up with AlphaVax, a human vaccine company based in Raleigh, North Carolina, to apply its proprietary alphavirus-based technology to veterinary medicine for the first time.

Because Harris was already based at ISU, it was logical to start labs and manufacturing in Ames, says his son Joel Harris, a postacquisition associate director at Merck Animal Health. There, they also had the advantage of direct contact with the USDA Center for Veterinary Biologics, located just down the road, which sped up the approval process for their new method of creating animal vaccines. Since the initial PRRS vaccine, Harrisvaccines has produced the first pig vaccines on the market for swine flu and porcine epidemic diarrhea virus, as well as bird vaccines following the 2015 outbreak of avian flu that plagued the state’s chicken flocks. “It has almost made us the first responders for new animal diseases,” Joel Harris says.

While Harrisvaccines has used technology designed for humans to benefit animal health, Exemplar Genetics has designed animals to study human disease. In the eight years since Exemplar’s founding, it has developed pig models of cardiovascular diseases, neurological disorders, cancer, and more. It’s also adding services to its portfolio: housing the human-size minipigs for urban researchers who don’t have space, for example, and running safety and efficacy trials of new therapeutics using its porcine subjects. Pigs might prove more reliable than rodents for the purpose, says Swart. For example, when Exemplar treated its cardiovascular pig model with Lipitor, it turned out that “they respond almost exactly like humans, and very unlike the mouse,” in which the drug had no effect, he notes.

Other Iowa-based companies are not just testing new medicines, but developing them, too. Ames-based NewLink Genetics creates cancer immunotherapies, as well as vaccines for Ebola and Zika, for example, while KemPharm, located just outside of Iowa City, is using a novel prodrug approach—creating inactive compounds that are only metabolized into their active form within the body—to battle opioid abuse. Specifically, KemPharm generates opioid-based compounds that only act in the intestine, and are thus ineffective if snorted or injected.

By launching in Iowa, these and other Iowan companies have taken advantage of one of the nation’s lowest costs of doing business: Iowa ranked seventh lowest of the states in 2014. The relatively low cost of living provides an added bonus, notes UI psychiatrist Rob Philibert, company CEO and principal founder of Iowa City–based Behavioral Diagnostics Inc., a company that’s developing quantitative tests of tobacco and alcohol use based on the level of DNA methylation at certain genetic loci. “You often get twice the person at a third of the price,” he says.

And for his company specifically, everything Philibert and his colleagues need to produce the methylation-based biomarker tests, which he hopes will enhance treatment-program compliance and even curb childhood smoking and alcohol use, is close by. The diagnostic relies on saliva-collection kits made by IBI Scientific in Peosta, outside of Dubuque. The DNA is then bisulfite-sequenced to assess the level of methylation, using primers synthesized by Integrated DNA Technologies (IDT), the world’s largest producer of oligonucleotides, which is headquartered in the Iowa City suburb of Coralville. And upcoming clinical trials of the alcohol diagnostic will be carried out in the Quad Cities, 60 miles to the east.

The draw of Iowa for biotech ventures is clear. Companies such as Exemplar Genetics, Harrisvaccines, NewLink, KemPharm, and Behavioral Diagnostics have contributed to the 10 percent growth of the state’s drug and pharmaceutical sector since 2001—a stark contrast to the 3.1 percent shrinkage of the industry nationwide in the same time frame. “We’ve done a lot more innovation than people might give us credit for,” says Hrdlicka. 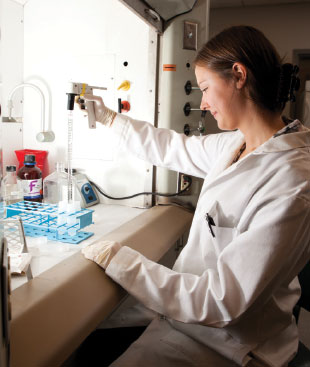 VAX PRODUCTION IN THE MIDWEST: A researcher at Harrisvaccines/Merck Animal Health conducts an RNA-particle production protocol that the company uses to manufacture vaccines for animal diseases.HARRISVACCINES/MERCK ANIMAL HEALTHSeveral of these companies, including Exemplar Genetics, Behavioral Diagnostics, IDT, and KemPharm are among the 45 businesses in biotech and high tech housed at UI’s Research Park in Coralville. Harrisvaccines is located in a similar research park at ISU. Both Swart of Exemplar Genetics and Joel Harris of Merck note the dramatic growth of these university-based clusters of companies over the past decade, and see them as the basis for a successful biotech corridor.

Part of that growth comes from targeted government support in Iowa’s research strengths. Iowa Economic Development Authority (IEDA) spokeswoman Tina Hoffman notes that the state government has a history of identifying growth opportunities in niche areas, such as biobased chemicals, and finding ways to support them. “The state is very committed,” says CBiRC’s Shanks. IEDA also provides a tax credit for research activities, which can help support fledgling companies just getting off the ground. The focus is “trying to find the place where government can come in and, with a little bit of assistance, close some gaps,” Hoffman says.

Where should the government fill in next? Hrdlicka of the Iowa Biotechnology Association suggests that one area ripe for investment might be a common strength shared by the state’s agricultural and medical biotechnology industries: the innovative use of genetics. Swart of Exemplar Genetics sees value in those techniques not only at his own company but in Iowa’s capacity to create cost-effective green fuels, develop solutions for livestock diseases, and reduce feed waste. With great universities and government investment, he says, “the state is really set up for success.”

Jenny Rood is a freelance science writer based in Cambridge, Massachusetts.