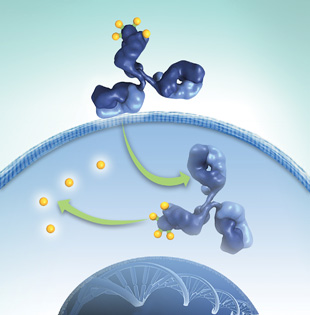 CANCER SNIPERS: ImmunoGen’s Targeted Antibody Payload (TAP) technology features highly potent cytotoxic agents (yellow) attached to antibodies (blue) for targeted delivery to cancer cells.COURTESY OF IMMUNOGENThe early 1990s were not a good time to be in antibody research. Once hailed as “magic bullets,” antibodies repeatedly failed in clinical trials for cancer treatments during the ’80s, and money and interest in the sector dried up. So when researchers at ImmunoGen, a small biotech in Waltham, Massachusetts, had the idea to use antibodies as vehicles to shuttle toxins to a tumor, they were largely ignored. “We wanted to present posters at meetings, but if we had ‘antibody’ in the title, no one would look at it,” says John Lambert, ImmunoGen’s chief scientific officer.

Around the same time, a company with a similar idea opened its doors on the West Coast. Molecular biologist Clay Siegall was enthusiastic about the idea...

Both companies, it turns out, were onto something good. They were developing what are now known as antibody-drug conjugates (ADCs)—today an established and active area of pharmaceutical research. In August 2011, the US Food and Drug Administration (FDA) approved the first in a new class of ADCs—Seattle Genetics’ Adcetris—after only phase II trials because the compound was so effective against lymphoma. And in June this year, Roche’s Genentech announced results from a phase III study of an ADC called T-DM1, created with technology licensed from ImmunoGen. The compound, consisting of a potent drug linked to Genentech’s blockbuster antibody Herceptin, delayed tumor progression and reduced the risk of death in metastatic breast cancer patients. What’s more, both T-DM1 and Adcetris have demonstrated an impressive lack of side effects compared to traditional chemotherapy.

“The T-DM1 data is really just blow-away,” says David Mott, a partner at venture capital firm New Enterprise Associates, which recently made its first investment in an ADC company. “The antibody-drug conjugate space is coming into its own after many years.”

The race is now on to develop ADCs that are more specific, more stable, and more effective than their predecessors. New and established companies are leaping into the space, with large pharmaceutical companies throwing in money to cushion the jump. (See table below.)

“I think the hype is justified,” says Tom Davis, chief medical officer of Celldex Therapeutics, an immunotherapy company with an ADC in phase II trials. “They’re not the answer for every target and disease, but they are a very real breakthrough.”

As trailblazers, ImmunoGen and Seattle Genetics hit numerous dead ends before achieving success with T-DM1 and Adcetris. All three parts of an ADC—the antibody that targets the tumor, the warhead that kills it, and the linker that binds the two—proved to be a challenge.

Like other biotechs in the 1980s, ImmunoGen initially used mouse antibodies, which provoked a strong immune response in humans, interfering with the therapy. ImmunoGen researchers overcame this problem in their ADCs by developing “humanized” antibodies from mice, replacing parts of the mouse protein with human components. “Naked” humanized antibodies, which have no warhead attached, are commonly used today as therapies across a wide range of cancers. 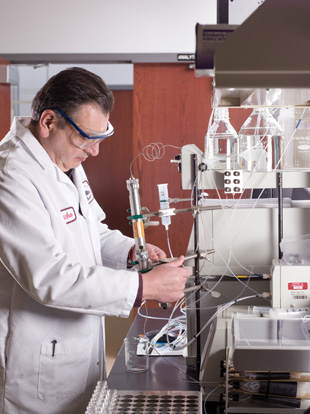 MINI SNIPERS: Endocyte is developing targeted small molecule drug conjugates (SMDCs) for the treatment of cancer and inflammatory diseases.COURTESY OF ENDOCYTEThen there was the problem with the warheads themselves. “First, we and others used standard chemotherapy drugs, but the payloads were not potent enough,” says Lambert. Only 0.01 percent of the antibody carrying the toxin actually gets to a tumor, so to be effective, the researchers needed a toxin strong enough to “melt asphalt,” one Seattle Genetics researcher hyperbolized.

I think the hype is justified. ADCs are not the answer
for every target and disease, but they are a very real breakthrough.
—Tom Davis, Celldex Therapeutics

After many tests, ImmunoGen chose a natural toxin called maytansine, originally isolated from the bark of an African shrub, as the basis for its payload. Seattle Genetics chose a synthetic toxin called auristatin. Both toxins kill cells by binding to tubulin—an important component of the cytoskeleton—and blocking its assembly into microtubules, thereby inhibiting cell division. Lastly, both companies spent time stabilizing their linker systems to ensure that the toxin is not prematurely released from the antibody into the bloodstream, where it could cause dangerous side effects.

Meanwhile, ImmunoGen contacted Genentech to propose attaching a maytansine derivative to Herceptin, which treats an aggressive form of breast cancer—and T-DM1 was born. Following the positive phase III results reported this summer, Genentech submitted T-DM1 for approval to the FDA and plans to submit it to the European Medicines Agency this year. Genentech continues to test T-DM1 for other indications while ImmunoGen pursues the nine other ADCs in its pipeline. “They finally work as we dreamed that they would 30 years ago,” says Lambert.

The successes of Adcetris and T-DM1 were green lights for the biotech sector. In the last 3 years, a veritable swarm of companies have come out with a host of novel biochemical approaches to improve ADCs.

Massachusetts-based Mersana Therapeutics, which previously focused on small molecule drugs, dove into the ADC pool last year. “Being a cancer company, we have to follow the hot trends in oncology,” says CEO Nicholas Bacopoulos. The company’s secret weapon is a biodegradable polymer that acts as a backbone, with the antibody as the head and cytotoxic payloads attached along its length. In this way, a single ADC can include 20 to 30 molecules of a drug instead of the 3 or 4 allowed by current technologies, says Mersana’s chief scientific officer, Timothy Lowinger. The polymer can also bind diverse warheads, ranging from small molecules to large proteins, which could be useful for different types of cancer or for indications outside of oncology.

More is not always better, however: attaching too many toxins to an antibody dramatically reduces its half-life in the bloodstream, increasing the chance of side effects, says Simon Allen, chief business officer at Ambrx, a La Jolla–based protein therapeutics biotech that is also looking to get more bang for its ADC buck. Using a unique technology that incorporates a synthetic amino acid into an antibody, the company’s researchers can attach an optimum number of toxins, says Allen. ADCs like Adcetris and T-DM1 currently contain a heterogeneous mixture of molecules: some antibodies have one toxin attached while others have as many as eight. Ambrx has determined that the optimal drug-to-antibody ratio is 2:1, and uses its technology to create a homogenous mixture of ADCs with that exact ratio. The technique also allows the researchers to specify where a linker binds an antibody. This can help prevent the linker from mistakenly attaching to the antibody’s antigen binding site, which needs to remain free to bind the tumor cell.

Sutro Biopharma, a South San Francisco–based protein synthesis company, is also looking to attach a linker to an antibody in a specific location using non-natural amino acids, but is doing so in a different way. The company uses a membrane-free E. coli extract to produce many versions of an antibody in a matter of days or weeks, whereas the traditional route of producing them in cell lines can take 9 to 12 months, says CSO Trevor Hallam. When Sutro entered the ADC business a year ago, their first proof of concept was to engineer 400 different versions of T-DM1, binding the warhead at different positions on Herceptin. “It took us 7 weeks to come up with a better T-DM1,” says Hallam. The company next plans to make antibodies that target multiple antigens, so that if a tumor cell no longer expresses one antigen and becomes resistant, the ADC can bind an alternate antigen and still deliver its payload. 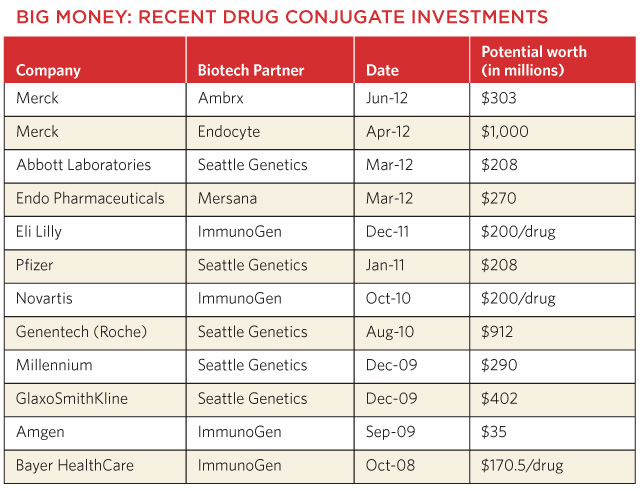 Conjugates of the future

Among the new faces and technologies, Seattle Genetics and ImmunoGen are still the field leaders. Seattle Genetics will announce a next-generation technology later this year, Siegall says, which is designed to produce ADCs with potency greater than that of previous compounds, and ImmunoGen continues to optimize its ADC therapies, focusing on finding the right antibody to hit the right target in a selected type of cancer. “Breast cancer cells behave differently than small-cell lung cancer cells,” says Lambert. “We have an empirical approach now, and we screen antibodies to find those that do exactly what we want them to do—kill cells efficiently.”

And ADCs’ clinical use may not be limited to treating tumors. In a recent deal with Ambrx, Merck announced their intention to develop ADCs in therapeutic areas outside of cancer, though the company has remained tight-lipped about what those areas might be. “We strongly believe that there is the potential for [ADCs] to go beyond the oncology focus that most companies are currently taking,” says Deborah Law, vice president of biologics discovery at Merck Research Laboratories.

Merck is also putting its money behind another ADC outlier—using a small molecule in place of a bulky antibody, which could more successfully target dense, solid tumors. Indiana–based Endocyte has constructed a drug conjugate of a potent chemotherapy drug bound to folate, a water-soluble B vitamin. Because folate is required for cell division, rapidly dividing cells like cancer cells often overexpress folate receptors. Impressive data on Endocyte’s lead candidate, vintafolide, from a phase II trial for drug-resistant ovarian cancer caught Merck’s attention, and the pharma company has agreed to pay up to a staggering $1 billion to advance the compound against various types of cancer.