Pluripotent stem cells can divide into daughter cells that maintain the ability to give rise to all cell types in the body, or they can be triggered to differentiate into a specialized state. In 2006 two groups published Hot Papers that began to tease out the networks of regulators that control the pluripotency-differentiation decision.

Richard Young at the Whitehead Institute and collaborators investigated the Polycomb complex in one of the Hot Papers. The Polycomb group of regulator proteins was first described as repressors of homeotic genes in Drosophila research from the late 1970s. Homeotic genes control segment identity in the developing fly embryo, and the absence of Polycomb components is lethal.

Young and colleagues found that the Polycomb complex occupies and prevents expression of a set of developmental genes, more than 200 in all, in human embryonic stem cells that...

In the same year that the Hot Papers were published, Shinya Yamanaka's team at Kyoto University in Japan made two additions to the collection of transcription factors involved in pluripotency: Klf4 and c-Myc. A year later, this group and another one reprogrammed adult human and mouse skin cells to become stem cell-like cells; these cells had the ability to self-renew and to form teratomas, the tell-tale signs of stemness. Both teams used retroviruses to introduce four transcription factors - Oct4, Sox2, Klf4 and c-Myc - to adult somatic cells. Then in April of this year, a research group led by Rudolph Jaenisch at the Whitehead Institute published details of reprogramming fully differentiated mouse B lymphocytes into a pluripotent state using Oct4, Sox2, Klf4, and c-Myc, showing that even terminally differentiated cells respond to this group of transcription factors.

Not all the transcription factors used in reprogramming experiments are necessary to induce pluripotency; some groups have been able to induce pluripotency without Nanog and c-Myc, for example. The exact recipe for pluripotency has not been determined and "to some extent Nanog has been downgraded by a series of experiments," says Vincenzo Pirrotta from Rutgers University. He adds that the mechanisms controlling pluripotency and differentiation may require different transcription factors at different stages, or may vary by species.

To complicate matters further, Stuart Orkin's group at Harvard Medical School has discovered an additional seven transcription factors involved in pluripotency. "What they found was that genes that are bound by all of these factors tend to be genes that are activated," says Konrad Hochedlinger from the Massachusetts General Hospital, whereas genes whose promoters are targeted by just a few factors tend to be inactive or repressed.

The mechanism that keeps cells pluripotent wasn't clear at all from the earlier papers examining pluripotency in Drosophila, for example, Hochedlinger says. The only clear effect of deleting developmental genes targeted by the transcription factors was that embryos died. Based on the observations in the Hot Papers "we concluded these [transcription] factors seem to play a role in the self- renewing state," he adds.

Bradley Bernstein's group at the Broad Institute compared the state of chromatin methylation, genome-wide, in mouse embryonic stem cells, neural progenitor cells, and embryonic fibroblasts. The type of methylation event determines whether it has a repressive or activating effect on the promoter of the gene in question. Unexpectedly, in the pluripotent cells, many sites had markers of both repression and activation. "These genes have both markers. That's very strange," says Jaenisch, who also coauthored that paper.

"This was a paradox but it was interpreted to mean that these genes were bivalent; they are repressed but poised to go," says Pirrotta. "Upon a differentiation signal, the cells [lose their pluripotency] and differentiate into neural lineages or muscle lineages of various kinds." So the system simultaneously puts the brakes on developmental regulators (through the Polycomb complex) and at the same time accelerates genes important for self-renewal, says Hochedlinger.

Not everything is clear yet. The Polycomb mechanism is important in maintaining stem cell pluripotency, but it's not what gives the cells that property in the first place, Pirrotta says. While the genes and proteins that recruit the Polycomb complex in Drosophila have been identified, their mammalian counterparts remain undiscovered.

Although researchers have been able to induce pluripotency and differentiation, "the field is very interested now in asking how does reprogramming work mechanistically," Hochedlinger says. "Especially at genome-wide level. Now it's a black box. We have no idea how reprogramming works." 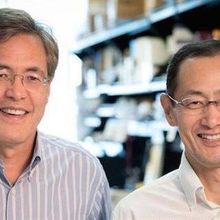