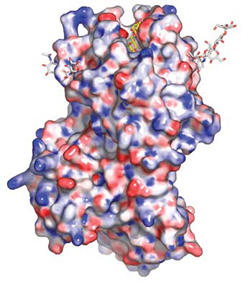 In the two decades following the discovery of natural killer T (NKT) cells, a major question loomed: Why did these cells exist? The only natural ligand for the CD1d antigen-presenting molecule found on these cells appeared to be α-galactosylceramide (α-Gal-Cer) from marine sponges, hardly an infectious threat.

The three Hot Papers featured here report two natural antigens that humans actually encounter: the glycolipid isoglobotrihexosylceramide (iGb3) in late endosomes and lysosomes of lymphoid organs1,2 and glycosphingolipids from Sphingomonas bacteria.3 These findings are "extremely important" because they clearly demonstrate that NKT cells have a relevant role in immunity for humans, says Dale Godfrey of the University of Melbourne. The insights have led to the identification of more relevant pathogenic activators of NKT cells and have provided avenues for intervening in...

The α-Gal-Cer antigen from marine sponges was "kind of bizarre," says Mitchell Kronenberg of La Jolla Institute for Allergy and Immunology in California. But in 2004 some confusion lifted with the identification of iGb3, the "first very clearly-defined mammalian antigen," according to Godfrey. Albert Bendelac of the University of Chicago and his colleagues showed that iGb3 stimulated NKT cells to produce cytokines.1 The finding, says Godfrey, is "a big step forward" because the strength of other proposed mammalian antigens was and still is "nothing close to the level of iGb3." Bendelac's team also demonstrated that knockout mice deficient in b-hexosaminidase A and B, enzymes presumed to cut iGb4 to iGb3, developed no NKT cells. This finding suggests that iGb3 is essential for NKT cell production according to Dapeng Zhou, first author on the paper.

Results challenged the iGB3 requirement, however, when Vincenzo Cerundolo at the University of Oxford and his colleagues found that mice with normal iGb3 still have disrupted NKT cell development.4 "It's a more general problem ... due simply [to] the accumulation of glycolipids in lysosomes," says Cerundolo, who explains that many factors, including iGb3 production, are affected by lysosomal storage disease in knockout mice. "It's a paper that makes you stop and think," says Godfrey.

The third NKT antigen came in 2005 when Bendelac's lab, Kronenberg's team, and Randy Brutkiewicz of Indiana University and his colleagues independently identified Sphingomonas as the first example of a microbe with antigens that activate NKT cells.2,3 Still, bewilderment as to the role of these lipid antigens lingered. Sphingomonas is present in large amounts in the human body and may be the most abundant bacteria in the biosphere, according to Kronenberg. Brenner says Sphingomonas "is not a human pathogen, so it is probably irrelevant to NKT cell physiology." Kronenberg adds that such an innocuous bug doesn't warrant the response it might elicit: "We thought there must be other glycolipids that affect these NKT cells."

Antigens from Sphingomonas and marine sponges both contain an α-linked lipid. So, Kronenberg looked to Borrelia burgdorferi, the bacterium that causes Lyme disease, because it has an α-linked sugar positioned in similar fashion. Their hunch paid off. Borrelia's diacylglycerol glycoplipid directly stimulated mouse and human NKT cells.5 The team is now working with patients with Lyme disease to determine if NKT cells play a role in the likelihood of getting the disease after a tick bite.

Zhou has tracked implications of iGb3 in myeloma. Now at the MD Anderson Cancer Center in Houston, he says "We have already found evidence that the iGb3 antigen might be a diagnostic marker and more importantly, a therapeutic target." Based on preliminary data, his team hypothesizes that iGb3 is upregulated in tumor cells to recruit NKT cells. Their investigation indicates that iGb3 is present in cancerous B cells but not normal B cells from these patients. Zhou says he's optimistic that an NKT cell-based therapy approach might thus help fight cancer.

In 2006, Dale Umetsu's team at Harvard University reported that 60% of the T cells in the lungs of patients with asthma are NKT cells.6 The results were "very unexpected," says Omid Akbari, a researcher on the project, because NKT cells account for only 1% of T cells in the human body. He adds that this is a concern because NKT cells are resistant to the corticosteroids widely in use. As for an explanation for the disproportionate amount of NKT cells in the lungs, Akbari suggests that perhaps Sphingomonas present in pollen attract NKT cells. The team is now looking into whether the severity of asthma correlates with NKT cell count.

The continued search for more NKT antigens may be enhanced by structural work in 2005, led by Massimo Degano of the San Raffaele Scientific Institute in Italy. His team published the crystal structure of mouse CD1d bound to a self lipid.7 This is important, says Godfrey, because "nailing the structural requirement" narrows the list of potential antigens.

Akbari anticipates that within the next five years, there will be "a whole spectrum of ... pathogenic, internal, and environmental antigens ... recognized by NKT cells."

Data derived from the Science Watch/Hot Papers database and the Web of Science (Thomson Scientific, Philadelphia) show that Hot Papers are cited 50 to 100 times more often than the average paper of the same type and age.