California researchers have found a previously unrecognized role for microRNAs: aiding and abeting hepatitis C virus in the liver. Peter Sarnow and colleagues at Stanford University School of Medicine found that a liver-specific microRNA interacts with the 5' noncoding region of viral RNA to enhance replication.1 The authors looked at miR-122, which accounts for 70% of microRNAs found in the liver, to see if hepatitis C might be using the host microRNA "for its own good," says Sarnow.

Hepatitis C RNA in Huh7 liver cell lines was reduced by about 80% when the researchers inactivated miR-122. And with miR-122 active, viral RNA with mutations in the 5' noncoding region failed to accumulate. Ectopically expressed miR-122 containing corresponding 5' mutations restored hepatitis C RNA levels, arguing against the possibility that the 5' mutation lowered levels through misfolding.

Previous work has shown that microRNAs can repress translation by binding an mRNA's 3' noncoding region. This is the first time such a molecule has been found to interact with the 5' region in an animal cell, or to positively regulate gene expression. "In the last couple of years, many people have found new and varied forms in which miRNAs can interact with the replication of animal viruses. This is a new and quite different example," says John Taylor, of the Fox Chase Cancer Center. 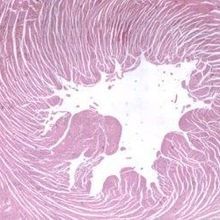