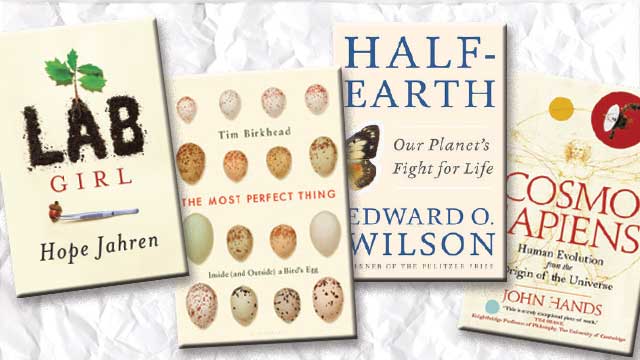 Hope Jahren uses stable isotope analysis to study changes in plant communities and the environment over eons of geologic time from her lab at the University of Hawaii at Manoa. Her new memoir, Lab Girl, traces her own evolution from curious daughter of supportive parents in rural Minnesota to globe-trotting expert in plant biology.

Winding through Jahren’s honest narrative are her ruminations on the plants to which she’s devoted her career and the story of her lengthy friendship and collaboration with lab manager Bill Hagopian, who has served as her scientific right-hand man at three separate institutions and on countless field excursions around the world.

Perhaps the most empowering takeaway from Jahren’s tale is the way she dispels the quixotic goal of “having it all” as a woman in science. By recounting the ups and downs that come with establishing labs, forging...

The Most Perfect Thing: Inside (and Outside) a Bird’s Egg

The age-old chicken vs. egg conundrum might never be fully resolved. But the unique, ovoid gestational chambers used by birds obviously predate humanity’s fascination with them. In Tim Birkhead’s latest book, The Most Perfect Thing, the wonders of bird eggs parallel the scientific journey launched to explore them. The University of Sheffield ornithologist takes readers inside eggs, detailing how they take shape inside the female avian body, how and why they’re colored, and how evolution made them the embryo containers of choice for one of the most diverse animal classes on Earth. Along the way, Birkhead also pays homage to the researchers who studied bird eggs, some of whom found in them broader insights into animal reproduction.

The author eloquently voices his appreciation for the simplicity and evolutionary utility of bird eggs. “As a biologist, I think of birds’ eggs as examples of perfection—or at least the perfect compromise between the different selection pressures they experience,” Birkhead writes in the book’s epilogue. “I happen to think of them as perfect, too, from an aesthetic point of view—in terms of color, shape and size. These two perspectives aren’t independent, of course: part of my biological fascination for eggs is driven by my admiration for their beauty.”

Half-Earth: Our Planet’s Fight for Life

The sage of evolutionary theory is back with a new book, not about biology past, but biology future. Edward O. Wilson, the Harvard University biologist who has been upsetting dogma and ruffling feathers in the field of evolution for decades, issues a stern warning to the current inhabitants of Earth. “For the first time in history a conviction has developed among those who can actually think more than a decade ahead that we are playing a global endgame,” he writes in the prologue to his latest book, Half-Earth. “Humanity’s grasp on the planet is not strong. It is growing weaker. Our population is too large for safety and comfort.”

Wilson cites greed and shortsightedness as the human traits that have brought ecological ruin to the planet that served as humanity’s cradle for millennia. But, ever the optimist, he also lays out a blueprint for reversing course. Humans must wake from our voracious daydream and dedicate half of the Earth’s surface to nature, protecting it, preserving it, and letting it return to the cycles and pressures that shaped it. With characteristic authority, Wilson makes such a proposal sound doable, even pointing out specific spots where the planet’s biodiversity can be saved and protected.

Cosmosapiens: Human Evolution from the Origin of the Universe

Plenty of books have told the harrowing story of human evolution from the appearance of our unassuming ancestors in the wilds of Africa to our modern stranglehold on the biosphere. But few, if any, have reached back further, to tell the tale from a starting point billions of years in the past—the birth of the universe itself. That’s what science writer and novelist John Hands aims to do in his latest book, Cosmosapiens.

In an audacious attempt to construct a theory of everything, Hands pulls together science from cosmology, theoretical physics, evolution, and neuroscience to explain how our species—trailblazers in the universe, as far as we know presently—may have arrived at the point of consciousness, and what might come next.

Although its critique of physical sciences is well-reasoned, Cosmosapiens will surely rankle life scientists. In an otherwise scientifically grounded book, when Hands strays from physics and into biology—particularly evolutionary theory—he considers too deeply the work of Michael Behe and other creationists who have written critically of Darwinian orthodoxy. Though he ultimately rejects intelligent design as unscientific, the amount of ink he spends on the line of reasoning is troubling in an otherwise thought-provoking book.