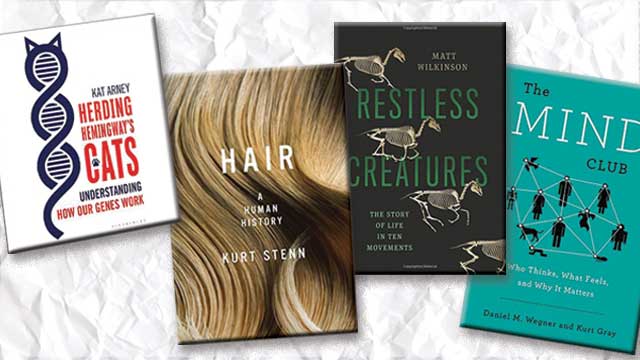 Mendel had his peas, Darwin his finches. Geneticist Kat Arney (perhaps unsurprisingly) chooses cats as her biological muse. But the U.K.-based science writer doesn’t pick just any felines to illustrate science’s emerging understanding of gene regulation—she leans on the six-toed cats popularized by Ernest Hemingway, whose Florida estate still teems with the polydactyl felines. “Learning about Hemingway cats and their broken [genetic] switches got me thinking about my own understanding of how genes work,” Arney writes in the introduction to Herding Hemingway’s Cats.

The author explains that it’s not faulty DNA that leads to polydactyl cats or humans, but rather mistakes in the molecular machinery that ushers genes through the processes of expressing their proteins at the right times and places during development. What follows is an engaging journey through the science, both historical and...

Virtually everyone who has hair fusses over it (Bernie Sanders types notwithstanding). But few of us amateur coiffeurs et coiffeuses understand the stuff to the extent that biologist Kurt Stenn does. The former Yale dermatology professor and current hair-follicle biotech CSO explores the history, biology, and cultural significance of tresses in his book Hair: A Human History.

Chapters on the evolution of hairlike structures in long-extinct mammalian ancestors, on the somewhat mysterious cellular biology of hair follicles, and on pathologies of hair set the stage for Stenn’s forays into the cultural impacts and oddities surrounding human pelage. Stenn peppers these later chapters with factoids and a cast of characters that will intrigue readers of all stripes: in 2007, a book dealer bought a single strand of hair plucked from the corpse of South American revolutionary Che Guevara for more than $119,000; a lock of 10,000 hairs has the tensile strength to support the weight of more than one adult person; etc.

Restless Creatures: The Story of Life in Ten Movements

Students of evolution are well aware of the beauty inherent in the process. Matt Wilkinson captures this splendor in Restless Creatures, a book that views evolution through the lens of locomotion. “Life, you see, despite its overwhelming diversity, has a single overriding theme—one that has dominated evolutionary possibility from the very outset,” the University of Cambridge zoologist writes in the introduction to the book. “That theme is locomotion—the apparently simple act of moving from one place to another.”

Wilkinson puts forth examples of adaptive solutions to problems, shifts in the locomotory strategies of life. From tree-dwelling hominins who eventually adapted to life on the ground to the incredible leap from earthbound organisms to airborne life forms, from how the forces of underwater living shaped the vertebrate backbone to the spinning of a falling maple fruit, Restless Creatures traces the movements of life through eons of evolution. And in the book’s closing pages, Wilkinson opines that studying the importance of movement in our past just might deliver us from our all-too-sedentary, fossil-fuel-fouled present to a brighter future. “Our 4-billion-year history of self-generated movement has given us everything we hold dear, down to the very awareness and curiosity that’s enabled us to piece that history together,” he writes. “It’s now up to us to decide whether that long, wondrous story ends here.”

The Mind Club: Who Thinks, What Feels, and Why It Matters

It’s an alliance we all perceive ourselves to be a part of: the group of beings who can sense, think, feel, and experience the world. Most humans are relatively sure of their membership in this “mind club,” but disagreements over what other entities—animals, computers, spiritual beings, etc.—deserve inclusion are where the conversation gets interesting. The philosophical problem, which has occupied thinkers for centuries, serves as fodder for The Mind Club, a book by two psychologists, Harvard University’s Daniel Wegner (who died in 2013) and Kurt Gray of the University of North Carolina at Chapel Hill.

Bubbling beneath Gray and Wegner’s exploration of who or what belongs in the mind club from historical, sociological, philosophical, and biological viewpoints is the remarkable story of how the book itself was written. Wegner, Gray’s graduate advisor, was stricken with ALS in 2010. As the disease slowly claimed the ability of his muscles to move, Wegner enlisted Gray to help him finish a book that he had only just started to write prior to his diagnosis. This arrangement is perhaps the single most crystalline illustration of one of the authors’ main points: “By understanding that we perceive the world instead of understanding it directly, we can realize not only that the self is fragile and that free will is an illusion but also that other minds can be both more and less than they appear.”