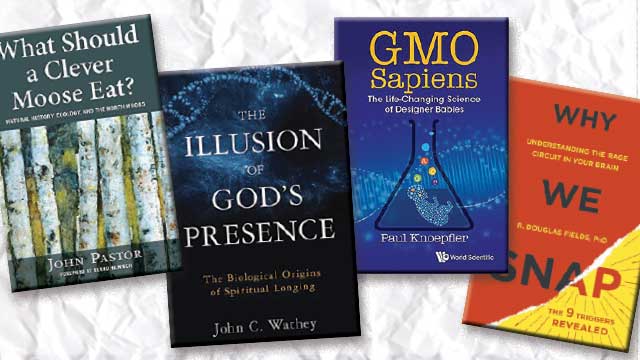 What Should a Clever Moose Eat?: Natural History, Ecology,
and the North Woods

In What Should a Clever Moose Eat?, University of Minnesota, Duluth, ecologist John Pastor takes readers on a deep dive into the natural history of a place he clearly has a fondness for. An intellectual descendant of Aldo Leopold, Pastor chooses a domain far wider than the area of Sand County, encompassing the whole of the North Woods, which extends from the western shore of Lake Superior to the coast of Newfoundland far to the east. But his perceptive love for the ecosystem shines through just as brilliantly as Leopold’s did.

As he considers the intricate natural details of the place—focusing on caterpillars, beaver ponds, and the titular moose, each in its turn—Pastor reveals an ethos that stewards of the land can (and probably should) apply on a global scale....

The Illusion of God’s Presence: The Biological Origins of Spiritual Longing

Could the religious experience of sensing the presence of a higher being be a holdover from the infant mind’s adaptive expectation of a nurturing caregiver? Such is the argument of computational biologist John Wathey, who writes of the evolutionary origins of spirituality and religiosity in The Illusion of God’s Presence.

Babies are hardwired to expect and respond to the presence of an almost omnipotent figure—more often than not their mothers. Wathey suggests that, as people age, this highly advantageous behavioral trait lingers, and spiritually inclined adults transfer the role of the kindly nursemaid to a more powerful, if unseen, being. In an intricately woven interpretation of the rise of religion in an evolutionary context, the author hopes to build a new model that sheds light on the doubt that some believers may experience. “Above all I have written [the book] for those who genuinely seek truth and depth of understanding,” he writes in the preface, “wherever that journey may lead. If you are impressed with the achievements of science and disappointed with the unfulfilled promises of religion and spirituality, then read on.”

Genetically modified organisms (GMOs) are all around and in us. We genetically modified the plants we eat, the drugs we take, and the pets we cuddle long before we knew what genes or DNA were. But humanity has progressed far beyond the blunt instrument of artificial selection. Now we have razor-sharp genetic tools, and the ultimate culmination of genetic modification may be right around the corner—genetically modified humans.

In GMO Sapiens, cell biologist Paul Knoepfler of the University of California, Davis, explores the recent history of genetic modification, and the ethically sticky proposition of using what we’ve learned about how to manipulate genomes to customize our offspring. From the early days of GMO crops and in vitro fertilization to the uncertain future ushered in by the relative simplicity of the CRISPR/Cas9 technique, Knoepfler traces the explosive rise of the technology that could make genetically modified humans a reality in the very near future.


Like many other researchers, Knoepfler is staunchly opposed to the idea of designer babies, but in favor of dabbling in the modification of human DNA for therapeutic purposes. “As much as I am concerned about the possibility of GMO sapiens being created in the coming years,” Knoepfler writes, “I do believe that if we speak out and take action we can greatly reduce that possibility. It is also important to encourage and advocate for useful laboratory research in the areas of genetic modification of human cells and even in special cases of human embryos limited to test tube work.”

Why We Snap: Understanding the Rage Circuit in Your Brain

These days people seem to snap into a state of anger and violence rather easily. Perhaps it’s the expectation of instant gratification, the ceaseless bombardment of sensory stimuli, or the cultural glorification of violence and aggression that have caused such an uptick in the behavior. Whatever the external drivers, the process of losing one’s cool and reverting to a primal survival mode certainly involves internal biological processes that connect modern humans with their ancient forebears. This physiological cascade constitutes the focus of neuroscientist R. Douglas Fields’s new book, Why We Snap.

Inspired by his own experience fighting back against a gang of pickpockets who tried to steal his wallet on a dim Barcelona street, Fields, a section head at the National Institutes of Health, details the triggers that might lead otherwise amiable people to hurl themselves into fits of rage. He coins the mnemonic device, LIFEMORTS—for Life-or-limb, Insult, Family, Environment, Mate, Order in society, Resources, Tribe, and Stopped—for the nine situations in which we are most likely to snap. The impulse to do so, however, lies deep within our genes, neurons, and brain regions, shaped by the imperatives of survival.