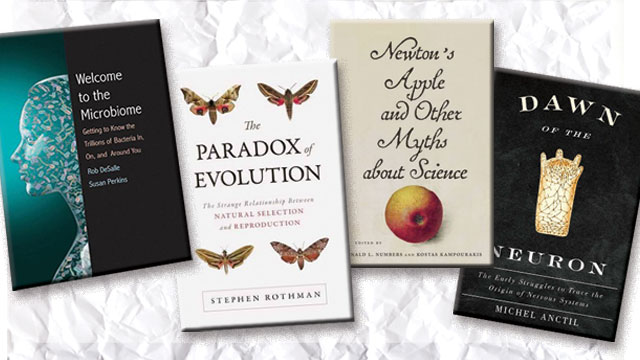 Welcome to the Microbiome: Getting to Know the Trillions of Bacteria and Other Microbes In, On, and Around You

Microbiome research has been on a meteoric rise for several years. And with a steadily improving understanding of the complex web of microbial interactions occurring around and inside us comes an appreciation of humanity’s place in a world run by microscopic organisms. Welcome to the Microbiome, written by entomologist Rob DeSalle and microbial genomicist Susan Perkins, serves as a field guide to this world and cultivates the emerging perspective that humans are merely a minuscule population in a world that is largely microbial.

From the shared evolutionary history of microbes and humans to the modern impact of microbiomes on science and medicine, DeSalle and Perkins bore into the subject from the bottom up. “Our understanding of the unique events...

The Paradox of Evolution: The Strange Relationship Between Natural Selection and Reproduction

The complex modes and mechanisms of reproduction that living things have evolved are not the results of natural selection. This potentially incendiary statement forms the hot nucleus of The Paradox of Evolution, the latest book from Stephen Rothman, emeritus professor of physiology at the University of California, San Francisco. Rothman argues that natural selection functions only to enhance the survival of an existing individual; it has nothing to do with reproduction, which concerns the continuance of life, not the continued survival of an individual.

Far from being a nonscientific refutation of Darwin’s theory of evolution, The Paradox is a nuanced and detailed rejection of the portion that says natural selection must give rise to reproductive features just as it does to the somatic features of organisms such as elongated necks or flattened heads. “But however complex, varied, and well developed our somatic adaptations have become, they are merely the handmaidens of reproduction,” Rothman writes. “As explained, survival is necessary for evolution, but it is not sufficient. What it does is make reproduction and hence life’s continuation possible. . . . If natural selection were responsible for the enormous variety and complexity of the mechanisms of reproduction that subsequently evolved, it had to have improved the circumstances of those engaged in the process, ergo the parents.”

Newton’s Apple and Other Myths about Science

Scientific progress sometimes dispels mythologies. But science has also spawned its own mythology, and many of those myths persist today. Newton’s Apple seeks to expose lingering misconceptions about the precursors of modern science, about how science is conducted, and about leading researchers who pushed their fields forward. Doing so is crucial, according to the book’s editors, science historian Ronald Numbers and biologist Kostas Kampourakis. “One should care,” they write, “because historical myths about science hinder science literacy and advance a distorted portrayal of how science has been—and is—done.”

The falling apple that supposedly inspired Isaac Newton is the subject of but one of 27 chapters, each tackling a separate scientific myth, written by a cavalcade of 26 science historians and scientists in addition to the authors. One of the more interesting takedowns appears in a later chapter and involves the fallacy that there is such a thing as “the scientific method” in modern science. “To squeeze a diverse set of practices that span cultural anthropology, paleobotany, and theoretical physics into a handful of steps is an inevitable distortion and, to be blunt, displays a serious poverty of imagination,” writes Oregon State University science historian Daniel Thurs. “Scratch the surface of the scientific method and the messiness spills out.” How do you like them apples?

Dawn of the Neuron: The Early Struggles to Trace the Origin of Nervous Systems

The study of coelenterates—a group that includes jellyfish, comb jellies, anemones, and hydra—doesn’t typically make for riveting pop-sci reading. But in the hands of University of Montreal honorary biology professor Michel Anctil, the unassuming creatures take center stage as the birthplace of modern science’s appreciation of neurobiology. In Dawn of the Neuron, Anctil describes how early neuroscientists, armed with the dual insights of cell theory and evolutionary theory, used coelenterates and sponges to show that the building blocks of neural systems existed in the evolutionary ancestors of more complex organisms.

Anctil gives personality to animals once thought not that different from plants and brings back to life the labors of researchers who looked to those simple organisms to make groundbreaking discoveries, the reverberations of which are still felt today.