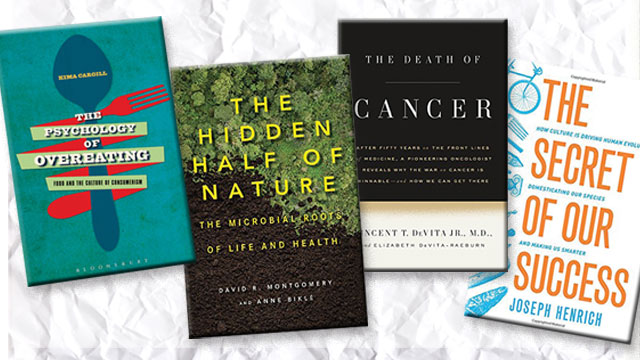 The Psychology of Overeating: Food and the Culture of Consumerism

Oof. You’ve done it again. You push away from the dinner table, and the button atop the zipper of your jeans creaks, holding on for dear life. You’re stuffed. Why? WHY did you do it to yourself again?!? According to University of Washington Tacoma psychologist Kima Cargill, it might not be entirely your fault.

In The Psychology of Overeating, Cargill posits that our consumer culture is at least partly to blame for our bloated waistlines. Likening “Big Food” to “Big Pharma,” the author faults food and beverage companies for manufacturing desire in human beings, who may be conditioned by evolution to gorge on nutrient sources as they become available.

Cargill uses case studies of people who overconsume for a variety of reasons—loneliness, depression, etc.—and are under constant pressure from the merchants of calories....

The Hidden Half of Nature: The Microbial Roots of Life and Health

Reading The Hidden Half of Nature, one gets the impression that its authors, geologist David Montgomery and his biologist wife, Anne Biklé, started out just trying to do a little gardening. But in the nutrient-poor soil of their Seattle back yard the couple unearthed a curiosity about the microbial world that extends beyond the site of their future tomato plants and into the human body.

As Montgomery and Biklé use scads of organic matter to enrich the dirt in their backyard, they gain a new appreciation for the importance of microbes in engendering and maintaining soil health. The two watch as their efforts and those of the soil microbiome transform their barren lot into a life-giving garden. The journey gets intensely personal when doctors diagnose Biklé with cervical cancer in the midst of their soil remediation project. But the authors use this devastating news as another invitation to explore the impacts of microbes, this time on human health and immunity.

“It’s time to recognize the essential roles microbes play in our lives,” they write. “They shaped our past and how we treat them will shape our future in ways we are only beginning to understand. We will never escape our microbial cradle, because nature’s hidden half is as deeply embedded in us as we are in her.”

The Death of Cancer

The Death of Cancer is a personal dispatch from the front lines of cancer research. Oncologist Vincent DeVita and his daughter, journalist/author Elizabeth DeVita-Raeburn, share a unique insight into the decades-long battle to vanquish a complex and wily foe.

DeVita, who served as the director of the National Cancer Institute from 1980 to 1988, sounds an optimistic tone in suggesting that science is beating (and will ultimately triumph over) cancer. “Don’t believe the cynics, the press, or the doubters,” he writes. “We are winning this war.” But he does not shy away from criticizing the way the US bureaucratic complex is tackling the goal. “We do face obstacles, but most of them are not scientific,” he writes. “Rather, they are in the form of not using what we know and the tools we already have to cure more because of a reluctance to drop outdated beliefs, bureaucratic battles among physicians and medical groups, and a Food and Drug Administration (FDA) that has not caught up with the innovations in cancer drug development.”

Mortality from breast cancers has dropped 25 percent; from colon cancer, 45 percent; and from prostate cancer, 68 percent—all since 1990. These figures lend credence to DeVita’s assertion that the massive amount of funding devoted to cancer research is paying off.

From his own battle with prostate cancer to the disease’s effect on his friends and family, DeVita, with the help of DeVita-Raeburn, paints an intimate portrait of the progress we’ve made, and the successes yet to come in battling the ubiquitous affliction.

The Secret of Our Success: How Culture is Driving Human Evolution, Domesticating Our Species, and Making Us Smarter

The key to Homo sapiens’s rapid spread and dominion over Earth’s biosphere is not our individual intelligence, but our propensity for connecting with our fellow humans. Such is the premise of Harvard evolutionary biologist Joseph Henrich’s new book, The Secret of Our Success. Our complex and well-developed cultures—and the linguistic, technological, and cooperative fruit they’ve borne—distinguish us from our animal kin while offering us an unparalleled  survival advantage.

Henrich draws on his far-flung ethnographic field studies and the work of colleagues to illustrate the adaptive power of human culture. In the end, he suggests adjusting the way we view the evolution of the human species to incorporate the complex layers that make us one unique animal. “To move forward in our quest to better understand human life,” he writes, “we need to embrace a new kind of evolutionary science, one that focuses on the rich interaction and coevolution of psychology, culture, biology, history, and genes.”