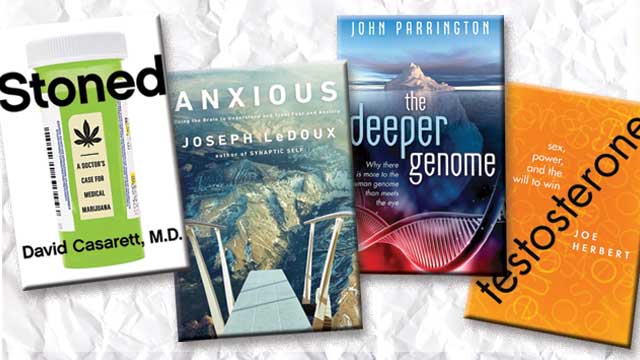 The science (or lack thereof) behind the use of medical marijuana is a hotly debated topic in scientific circles these days. As more states legalize marijuana for therapeutic or recreational use, it’s never been more urgent to fully understand the health effects of the drug, which the federal government still considers a compound that is devoid of any medicinal virtue. Such is the quest that propels University of Pennsylvania researcher/physician David Casarett in Stoned.

With a flair for narration, Casarett seeks clarity on the issue of medical marijuana, traveling around the world to labs, clinics, and patients’ homes. The author even experiments with different marijuana-laced products using himself as subject. Although Casarett clearly favors the use of medical marijuana, Stoned gives a reasonably balanced account of the benefits and risks of marijuana as far as research has...

Anxious: Using the Brain to Understand and Treat Fear and Anxiety

Anxiety is on the rise. Nearly 20 percent of Americans experience some form of anxiety disorder. And the key to understanding and stemming the modern tide of agita may lie deep in the very brains from which it emanates, according to New York University neuroscientist Joseph LeDoux in his new book, Anxious.

By considering anxiety in tandem with its evolutionary partner, fear, researchers and physicians can develop a better understanding of the conditions under which anxiety stops being adaptive and starts being disruptive. By contextualizing anxiety disorders in the study of conscious vs. unconscious emotions in the human brain, LeDoux argues, science will glean crucial information about how to better treat the increasingly prevalent malady. Meditation, deep-brain stimulation, and gene therapy are all on the table, according to the author. “For therapy to have maximally beneficial and persistent effects, it may well be necessary to change both conscious and nonconscious memories that contribute to distress,” LeDoux writes.

The Deeper Genome: Why There is More to the Human Genome Than Meets the Eye

By now everyone knows the tale of how Watson and Crick, Franklin and Wilkins worked together (or not) to discover the structure of DNA. The more contemporary story of the race to sequence the human genome is equally familiar. But these days, a new story about the genome is emerging: a more complicated one about how the genetic code is controlled. In The Deeper Genome Oxford University researcher John Parrington gives a nice overview of the regulatory elements, RNA varieties, and epigenetic changes that play crucial roles in translating genetic information into palpable, biological material and behaviors.

Because these insights represent a steadily building body of knowledge that continues to uncover complexities buried deep within a deceptively simple string of just four letters, they don’t make for a sexy history-of-science tale. Nonetheless, understanding those processes is crucial to putting the genetic code to work in science, medicine, industry, and agriculture. Parrington’s book serves as a good primer on the subtlety and complexity of the genome, especially the human genome, new facets of which emerge on a regular basis from labs around the world.

Testosterone: Sex, Power, and the Will to Win

It is the best of hormones, it is the worst of hormones. In Testosterone, Cambridge University neuroscientist Joe Herbert leads a guided tour through human evolution using the multifaceted hormone as his lens and vehicle. “Testosterone,” he writes, “has only one function—to enable a male to reproduce.” But in humans (and other animals), the potent chemical exerts its effect all over male bodies, including brains. The fuel for antler growth, aggression, and inventiveness, testosterone plays a crucial role in mammalian reproduction, was central to early human evolution, and continues to shape the social landscape of today’s world.

Lest his perspective on testosterone be deemed too male-centric, Herbert explains that the chemical’s effects reach far outside the male body. “The tendrils of its powerful actions creep into much of what we do,” he writes. “By ‘we’ I do not simply mean men: the dramatic, but often unrecognized, influence it has on men is reflected in...the lives of women. Testosterone has important roles in women, too...though these are less often recognized than those in men, and thus on another dimension of the formation and structure of the world we all live in.”