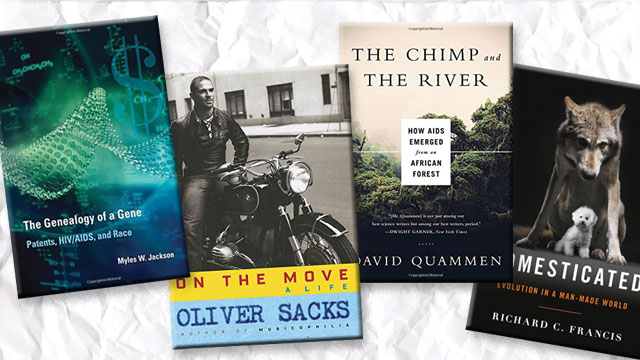 The Genealogy of a Gene: Patents, HIV/AIDS, and Race

CCR5 has been through a lot. Since scientists first sequenced it in the 1990s, the human nuclear gene—about 6,000 base pairs, located on chromosome 3—has gone from needle in a genomic haystack, to scientific curiosity, to patented product, to genetic blueprint for a key HIV coreceptor, to hotly researched potential target for AIDS drugs and vaccines. In The Genealogy of a Gene, New York University historian of science Myles Jackson exhaustively describes CCR5’s journey through wet labs, the US patent office, biopharmaceutical firms, popular consciousness, and beyond. “In short, the gene’s genealogy is a complex and intertwined one,” he writes, “including lineages of biocapitalism, the sciences of chemokines and HIV/AIDS, the Human Genome Project and the HapMap, intellectual property law, big and small pharma, personal genomics companies, and race.”

On the Move: A Life

Renowned neurologist and prolific writer Oliver Sacks has always injected his own experiences and emotions into his gripping tales of disease and brain science. But now he has penned the most personal work of his long and distinguished career. In his autobiography, On the Move, Sacks leaves no stone unturned as he delves into all points—pleasurable, painful, and otherwise—of his life. From his boyhood fixation on motorcycles, to the clinical experiences with encephalitis lethargica that inspired his first major book, 1973’s Awakenings, to love affairs, struggles with drug addiction, and his bond with his schizophrenic brother, Sacks offers an intimate look at the defining moments of his journey thus far.

Sacks’s autobiography comes at another crucial crossroads in the 81-year-old author’s life. He revealed in a February New York Times opinion piece that the cancer detected in his eye nine years ago has metastasized to his liver. He relates the fear and gratitude he feels as he stares death in the face. If ever there was a time to get to know Sacks, especially through the intimate self-portrait he paints in On the Move, it is now.

The Chimp and the River: How AIDS Emerged from an African Forest

Seasoned science writer David Quammen brings his unparalleled knack for prose to the seldom-told, or at least oft-misunderstood, ecological origin story of the HIV/AIDS epidemic. In The Chimp and the River—extracted from his 2012 best-seller Spillover, updated and with new material added—Quammen deftly reconstructs the epidemic’s zoonotic origin, which likely involved a single human contracting the pandemic group M type of HIV-1 from a chimp he butchered in southeastern Cameroon around 1908. As ever, the author places himself in the action, travelling to remote corners of Africa and infectious disease labs across the world.

Quammen probes the zoonotic nature of HIV/AIDS and reminds readers that the 12 different existing groups of the virus (eight of HIV-2 and four of HIV-1) spilled over from animal host to human in a series of unfortunately common events. “HIV hasn’t happened to humanity just once,” he writes. “It has happened at least a dozen times—a dozen that we know of, and probably many more times in earlier history. The arrival of HIV in human bloodstreams was, on the contrary, part of a small trend.”

Domesticated: Evolution in a Man-Made World

Domestication has brought humankind into close proximity with erstwhile wild animals that for millennia have provided us with companionship, food, protection, hunting help, and fibers. But how we tamed free-living creatures to the point that they became amenable to confinement, servitude, and/or snuggling is largely lost to history. Science journalist Richard Francis, who also has a PhD in neurobiology, draws on a variety of scientific disciplines to construct case studies for a number of different species in Domesticated: Evolution in a Man-Made World.

Each chapter of the book’s first half highlights the evolutionary transformation of one species into its domestic form. Francis tackles dogs, cats, ferrets, mink, pigs, cattle, sheep, goats, reindeer, camels, horses, mice, and rats, among other human-proximal animals. Although the archaeological, anthropological, genomic, and evolutionary story differs for each case of domestication, a couple of common threads emerge: virtually all domestic breeds retain genetic traces of their wild forebears, and domestication often results in the selection for and retention of juvenile traits. In the latter half of Domesticated, Francis trains his sights on human evolution, emphasizing how that process was aided by the subjugation of our fellow animals. “Domestication is an example of how our dominion is less a matter of adaptation, as biologists typically understand the term,” he writes in the book’s final chapter, “and more a matter of adapting our environment to our own ends.”