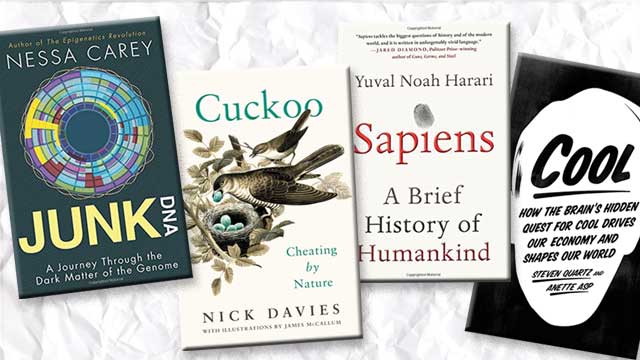 Junk DNA: A Journey Through the Dark Matter of the Genome

Can we please stop calling non-protein–coding DNA “junk?” We’ve had more than a decade—since researchers first sequenced the human genome in 2001—to come to grips with the fact that 98 percent of our DNA doesn’t get translated directly into proteins. And in the intervening years, what was initially considered perplexingly abundant detritus has evolved into a wondrous genomic landscape that hasn’t disappointed intrepid explorers. Imperial College London molecular biologist and author Nessa Carey details this transformation and the progress science has made in her latest book, Junk DNA.

Carey examines the importance of noncoding DNA, from its role in controlling gene expression to the ways in which it influences RNA behavior, disease progression, and sex determination. Although we can now be sure that 98 percent of the human genome is anything...

Junk DNA serves as a nice primer for the still-uninitiated, but here’s to hoping that continued research, and the emerging view that genomes behave like networks rather than a string of isolated genes, soon relegates the J-word to the junk pile of science history.

Cuckoos are masters of the art of deception. The medium-size, grayish birds have evolved a reproductive strategy called brood parasitism, in which they lay their eggs in the nests of other bird species, duping those hapless parents into rearing cuckoo young. Although there are other brood parasites among birds, fish, and insects, behavioral ecologist Nick Davies has made the cuckoo the lens through which he views the fascinating adaptation.

In Cuckoo, he relays the history of how science has viewed the behavior—from early observers, who struggled to fathom why the Creator made an animal with so little affection for its own offspring, to Charles Darwin, who reasoned that the interplay between cuckoo and host bird species reflected the same evolutionary arms race he’d noted between predator and prey.

Davies shares insights into his years of research on the specifics of how the cuckoo evolved brood parasitism. His obvious passion for observing cuckoos, their host birds, and the behavioral and physical traits that make them nature’s perfect cheat is liable to spark similar stirrings in aspiring naturalists who read this book.

Sapiens: A Brief History of Humankind

Human beings are the most destructive force this planet has ever seen. We change the climate, extirpate entire species, and transform ecosystems. But just how has our species come to dominate the Earth? Such is the weighty question tackled by historian Yuval Harari in his latest book, the international best-seller Sapiens: A Brief History of Humankind. “The most likely answer is the very thing that makes the debate possible,” he writes. “Homo sapiens conquered the world thanks above all to its unique language.”

And with language, Sapiens (as Harari refers to the species in the book) has created powerful myths about gods, money, politics, and human rights. These myths, when codified and shared, can draw together multitudes of individuals into cohesive groups. And in numbers, there is strength.

Harari recounts the meteoric rise of our species in light of the advantages bestowed upon us by our supple and descriptive language. But the attribute that made us so powerful could be our undoing. The author decries the seeming aimlessness with which Sapiens wields its unique skill set. “We are more powerful than ever before, but have very little idea what to do with all that power,” he writes. “We are consequently wreaking havoc on our fellow animals and on the surrounding ecosystem, seeking little more than our own comfort and amusement, yet never finding satisfaction."

Cool: How the Brain’s Hidden Quest for Cool Drives Our Economy and Shapes Our World

Fads may come and go, trends fluctuate, but cool is always in style. Even the word, likely co-opted to mean something hip or au courant around the late 19th century, retains its meaning among toddlers and tweens, the middle-aged and octogenarians. But why are we so universally attracted to things that are cool? The answer may lie deep in our brains, argue cognitive scientist Steven Quartz and political scientist Anette Asp in Cool.

The authors suggest that the brain’s cool circuits, which probably involve the medial prefrontal cortex and the striatum, likely drive the consumerism that so dominates myriad human cultures. Cool, in fact, is intimately related to our desire to possess, Quartz and Asp write. “Cool turns out to be a strange kind of economic value that our brains see in products that enhance our social image.”

The evidence for their model comes from studies involving functional magnetic resonance imaging (fMRI)—not the most rigorous of neuroscientific techniques—but they make a compelling case, in a series of consumer scenarios, that our modern-day spending habits reach back deep into our evolutionarily enhanced drive to be socially accepted.