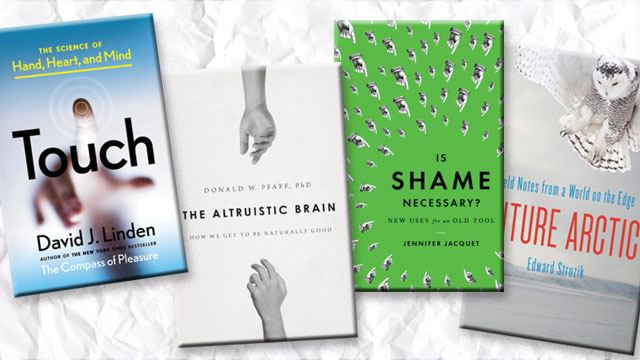 Touch: The Science of Hand, Heart, and Mind

Touch, like the other senses enjoyed by human and nonhuman animals alike, is a complex channel through which we experience the world. It is not merely a way to feel pain or pleasure, heat or cold. It is a sensation intimately tied to emotion, memory, and social interaction. Johns Hopkins University neuroscientist David Linden tackles the multilayered sense in his latest book, Touch.

With a novelist’s flair for anecdote, Linden unpacks the science behind touch by revealing how the sense informs and motivates us in everyday situations. A lover’s caress, the sting of a chili pepper, the satisfying scratching of an itch—all spark intricate touch circuitry that extends from skin to nerves to brain. Linden explores the past and present work of researchers who study touch—from mundane sensations to pathological overexcitations—and are helping to build...

The Altruistic Brain: How We Are Naturally Good

The Altruistic Brain, a new book by Donald Pfaff, a Rockefeller University neuroscientist, dissects our most generous urges and explains that the human brain has been bent toward goodness through adaptation, rather than by morality
or religion.

Viewing altruism as an innate characteristic is nothing new. But Pfaff veers from discussing altruism in a strictly evolutionary context to describe the complicated neuroanatomy that actually produces the behavior. He brings to bear the latest neuroscience, his own and the work of others in the field, to make the case that humans are hardwired for good and ethical behavior, a framework he calls the “Altruistic Brain Theory (ABT).” Importantly, Pfaff accomplishes this in a way that is accessible to nonscientists.

But the author does not stop there. He also drafts a prescription for how to remove barriers to our natural inclinations toward altruism. Simply by understanding that our brains are designed to be altruistic, Pfaff explains, we can strengthen those proclivities. “When we think better of ourselves,” he writes, “we try to live up to that self-estimation.”

Is Shame Necessary? New Uses for an Old Tool

Slut-shaming. Fat-shaming. Dog-shaming. Tattoo-shaming. The list of words that have been hyphenated into the modern consciousness together with the heavily overused S-word goes on and on. But environmental social scientist and science blogger Jennifer Jacquet, in her new book, dives headlong into the cliché to root out the real meaning and utility of shame.

Beyond asking the titular question, Is Shame Necessary?, Jacquet delves into the psychology and sociology of shame, explaining that exposing individuals’ faults could be an ancient human behavioral trait. She suggests and illustrates that harnessing shame and using it judiciously can be an effective way of combating environmentally, socially, or economically destructive business practices or policies—more effective, even, than the equally ingrained, but self-inflicted, impulse toward guilt that sees people choose organic over conventionally farmed produce or reach for the dolphin-safe tuna. “Guilt, like all emotions, has its strengths,” Jacquet writes, “but it also has its limits when it comes to what it can accomplish, and how quickly.”

But shame cannot be used willy-nilly to effect social, economic, and environmental change, she warns. “Shaming is a potent tool, but its power, as with antibiotics, depends a lot on whether the proper dose is used at the right time.”

Future Arctic: Field Notes from a World on the Edge

Who better to give an all-encompassing vision of an Arctic threatened by climate change than Edward Struzik, a Canadian writer and photographer who has spent decades documenting science, policy, native issues, and the environment in the Earth’s fragile northern cap? In Future Arctic, the intrepid explorer shares tales of his adventures, from surviving a terrifying peregrine falcon attack and tracking polar bears to navigating an anomalous Arctic cyclonic storm and living in native communities.

“The end of the Arctic that has existed for all modern time is upon us today,” Struzik warns. “What it will look like in the future depends in part on the policies we choose to help shape what we—peoples from the south and peoples of the north—would like it to be.”

The author views the Arctic through the lenses of archaeology, geology, anthropology, and ecology to draw a unique picture of where the sensitive region has been and where it might be headed.