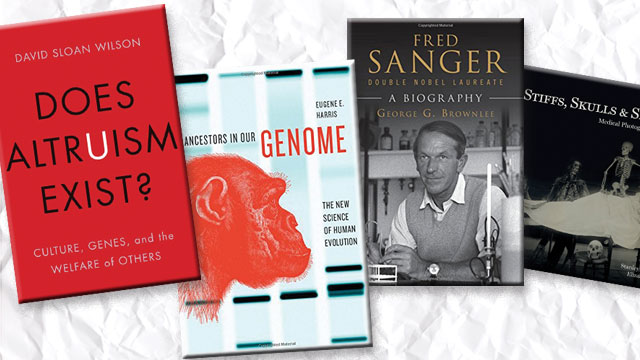 Does Altruism Exist? Culture, Genes, and the Welfare of Others

Is this the last nail in the selfish gene’s coffin? I wouldn’t toll the bell quite yet, but biologist David Sloan Wilson does make quite a compelling case for altruism in his latest book, Does Altruism Exist? The author, a longtime proponent of the concept of group selection, argues that the social phenomenon does indeed exist and constructs a solid theoretical foundation for how the selfless behavior evolved and operates in social animals, especially humans.

The classic example, eusocial insects, makes an appearance in Wilson’s book, but his focus is on altruism as embodied by human behavior. As ever, evolutionary history provides the context for his argument that altruism is a real and adaptive trait, best categorized by the observation of action, not the interpretation of intention. Wilson surveys group-level functional...

Ancestors in Our Genome: The New Science of Human Evolution

After researchers sequenced the human genome in 2001, our closest living branch-mates on the tree of life were soon to follow: chimpanzees in 2005, macaques in 2007, orangutans in 2011, and bonobos and gorillas in 2012. And scientists continue to sequence other primate genomes. In Ancestors in Our Genome, molecular anthropologist Eugene Harris shares the most recent insights into human evolution that have attended the decoding of these genomes.

Although we know that humans and other great apes (bonobos, chimpanzees, gorillas, and orangutans) share a large percentage of DNA, there is also a clear split that signals our divergence from a common primate ancestor sometime in the mists of evolutionary history—around 5 million–7 million years ago, by current estimates. Going beyond the paleoanthropological approach that for decades dominated the study of human evolution, Harris employs population genomics to explore questions answerable with the flood of information regarding primate and hominin DNA. Though the book may be a tad rudimentary for the genomicists among us, it gives a good overview of the state of the science regarding the genomics of human evolution.

With all the talk of CRISPR and next-gen sequencing, it’s all too easy to forget that the modern genomic revolution started with one man: an unassuming British biochemist named Frederick Sanger. The first-ever full biography of the researcher, Fred Sanger—Double Nobel Laureate, comes at a time when the revolution Sanger launched is poised to break down yet another barrier and move into the realm of personal genomics. George Brownlee, who was Sanger’s PhD student, relates the story of the famed researcher’s life from humble Quaker beginnings in the English countryside to his retirement from science in 1983, after developing methods to sequence proteins, RNA, and DNA, netting two Nobel Prizes in the process.

A must-read for any student of science history, Fred Sanger is a reminder that transformative science often comes from modest people and serves as an homage to the man whose work launched a million sequencers before his death in 2013. Sanger sequencing may soon be a thing of the past, superseded by faster and more efficient methods, but Sanger’s story and legacy, with the help of this book, endures.

The dawn of photography in the 19th century came at a time when science, too, was experiencing a transformational shift. Charles Darwin published On the Origin of Species a mere 20 years after French inventor Louis-Jacques-Mandé Daguerre displayed the very first photographs ever produced: daguerreotypes. Ever since, science and photography have marched hand in hand through technological advances and conceptual breakthroughs, each feeding the other. Stiffs, Skulls & Skeletons, a compilation of more than 400 rare medical photographs, is a celebration of the early days of this relationship.

Stanley Burns, physician and renowned medical photography historian, curates the collection, and provides commentary on the striking images. The book not only contains some early attempts at recording dissection, bone morphology, and X-ray imaging, it captures the Victorian era’s fascination with dead bodies and body parts. A cultural, historical, and medical trove of photographic treasures, Stiffs would, for my money, make way better waiting-room reading than Golf Digest.