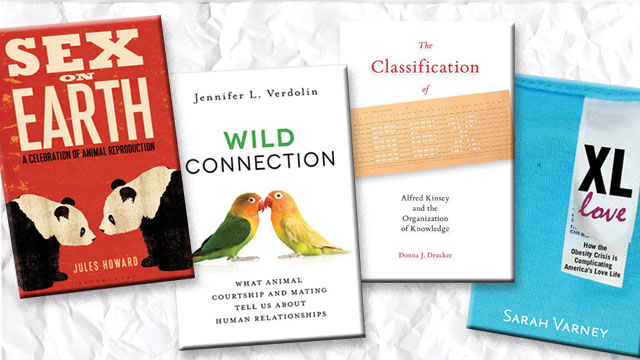 Sex on Earth: A Celebration of Animal Reproduction

For about a billion years, Earth has been a pretty sexy place. Since the first lowly eukaryotes gave it a whirl, sexual reproduction has spread to become a hallmark of kingdom Animalia. Zoologist and nature writer Jules Howard’s latest book is a paean to the kaleidoscopic forms, functions, and behaviors that have ushered the procreative act on its evolutionary journey to ubiquity. “For every burly elephant seal guarding a harem, there is a hermaphroditic slug swarming over a dog turd, or a nearly extinct spider being encouraged to have sex in someone’s kitchen,” he writes. “A panda sniffs a piece of wood; a toad safely crosses a road to find its ancestral breeding ground; a dolphin gently gooses its buddy; dogs hump. Sexual successes each and every one, each worthy of admiration, respect, greatness and...

Howard guides a tour through the sex lives of animals, extinct and extant, from timeless tales of cuckoldry and fidelity to newer insights into the peculiar twists that some species have introduced into the age-old game of sexual reproduction.

Wild Connection: What Animal Courtship and Mating Tell Us About Human Relationships

Speaking of animal attraction . . . we humans could learn a lot by considering the machinations of the other sexual organisms with which we share our planet. Elaborate animal courtship and mating rituals echo through eons of evolution, reverberating in the lengths that we humans go to in order to secure mates. Animal behavior expert Jennifer Verdolin draws connections between the sex lives of animals and human courtship in her new book, Wild Connections.

“Looking at how animals overcome the hurdles of communication or cooperation can add a new dimension to your romantic endeavors,” she writes in the book’s first chapter, “whether you identify more with ducks or with albatrosses.”

Ducks were once thought to mate for life, but science has discovered that even “monogamous” pairs step out on their mates in one way or another. And some albatross species undergo an extensive and lengthy courtship period only to cheat on their chosen mates. (For the record, I identify with neither bird.) Do I care too much about what someone looks like? How much does size really matter? Could there possibly be a general lack of appreciation for men? Verdolin answers these personal questions through the lens of animal courtship and mating behavior, often with sharp wit.

The Classification of Sex: Alfred Kinsey and the Organization of Knowledge

Alfred Kinsey was one of the most influential and controversial figures in the field of sex research. In The Classification of Sex, Donna Drucker, a guest professor at Technische Universität Darmstadt in Germany, invites readers into the mind of the man who is usually viewed from the point of view of his prodigious contributions to sexology and his unrestrained views on human sexuality, rather than his intellectual development. It’s a refreshing change of perspective on Kinsey, and one that explains how rigorous scientific thinking undergirded his great renown.

Kinsey was a scientific collector from early on, Drucker explains, studying more than six million specimens of gall wasps for his doctoral research in entomology. He seemed on track to make his mark in the field of zoology, taking a professorship at Indiana University in 1920 and publishing an introductory biology textbook shortly thereafter.

But Kinsey’s academic path was forever shifted in 1938, when he first taught a course on marriage and began seriously considering the science of sexuality. Data on human sexual behavior, not insects, became his quarry. And the rest is sexology history, made by Kinsey and his collaborators and lab mates and adroitly recounted by Drucker.

It’s a well-documented, endlessly repeated fact that humanity has been getting fatter for quite some time. Worldwide, the obesity rate has doubled since 1980. Following in the wake of the global bloat are alarming upward trends in so-called “lifestyle diseases,” such as heart disease and diabetes. But Homo sapiens’ widening girth is causing problems of a sexual nature as well, especially in the U.S., which until recently led the world in obesity. Recognizing and treating such problems is the call to action sounded by health reporter Sarah Varney in XL Love.

Varney tracks down people suffering from the sexual strain of excess weight and those who seek to understand and help them. She tells the stories of lonely singles whose obesity is crippling their chances of finding a mate and of couples driven to the brink of divorce because of obesity’s role in their intimacy. Varney’s anecdotes also extend into the realm of analysis when she visits researchers and health-care workers who are tasked with halting or reversing the crushing physiological, psychological, and social effects of obesity. This eye-opening look at one of the less-discussed and poorly studied ramifications of America’s expanding waistline deserves attention from the public and the scientific community alike.