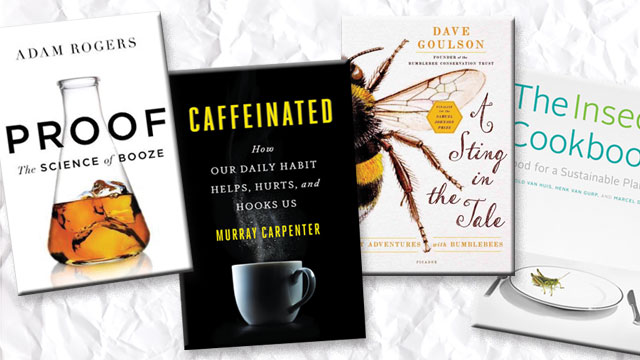 Proof: The Science of Booze

Belly up to the bar for this thorough treatment of ethanol, a drug that transcends geography, culture, and maybe even evolutionary time to constitute a key component of human recreation, if not the human diet. In Proof, science writer and Wired editor Adam Rogers leads a tour of breweries, distilleries, bars, and research labs, where craftsmen and scientists seek to learn the mysteries of creating alcoholic beverages and to chart the physiological and psychological effects of the drug.

This paean to booze is a thought-provoking scientific accompaniment to your next cup of good cheer.

Caffeinated: How Our Daily Habit Helps, Hurts, and Hooks Us

For millions of people around the world, the day doesn’t officially start until they’ve finished that first cup of Joe, tea, or (retch!) energy drink. Many of us quaff these brews, not primarily for their complex flavor, pleasant aroma, or effervescence, but for the buzz-inducing drug they contain—caffeine. Journalist Murray Carpenter trains his focus on the chemical with a cult-like following in Caffeinated, a book that leaves no aspect of caffeine unexplored.

Through his “caffeine-centric lens,” Carpenter offers a glimpse of a world where the science behind the chemical fascinates as much as its history enlightens, its regulation (or lack thereof) startles, and its ubiquity in beverages, foods, and supplements disquiets. Readers can extract a bevy of surprising factoids: a tablespoon of pure caffeine will kill a human; the drug works by blocking adenosine, a neurotransmitter that communicates drowsiness; and the FDA does not require beverage manufacturers to indicate the quantity of the chemical on labels. Eye-opening stuff that may or may not serve as a buzz kill to those of us who rely on caffeine to jump-start our mornings and, oftentimes, afternoons.

A Sting in the Tale: My Adventures with Bumblebees

Speaking of buzz . . . while modern agriculture has certainly highlighted the importance of European honeybees, it has had the opposite effects on their wild cousins, the bumblebees. Honeybees are cultured and transported to crop fields and orchards throughout Europe and the U.S. to provide crucial pollination services. But bumblebee species, especially those native to the United Kingdom, have gone extinct or are in serious trouble, prey to “a monoculture [of cereal grains] stretching across the landscape,” writes University of Sussex ecologist Dave Goulson in his latest book, A Sting in the Tale. Goulson has dedicated his life to studying the behavior, ecology, and conservation of bumblebees in the U.K., and he shares his journey with readers in this intimate portrait of his insect infatuation.

Goulson’s Tale sweeps outward from the U.K.—where he founded the Bumblebee Conservation Trust to enhance farming practices and preserve native, bumblebee-friendly landscapes—to consider bumblebees the world over and conservation issues beyond the buzzing of his pet pollinators. “Perhaps if we learn to save a bee today we can save the world tomorrow,” he writes.

The Insect Cookbook: Food for a Sustainable Planet

Entomophagy, or the practice of eating insects, may seem like an activity better suited to our ancient primate ancestors than to modern humans, with our sensitive and refined palates. But two entomologists, Arnold van Huis and Marcel Dicke, and a chef, Henk van Gurp, argue that dining on insects needs to become the wave of the future if humanity is to achieve true sustainability. In The Insect Cookbook, the Dutch trio seeks to position insects as dietary staples.

“If birds, mice, anteaters, and apes eat insects, why should we not eat them as well?” the authors ask. “We” do, they explain, if we’re talking about Latin Americans, Asians, or Africans, who regularly consume ants, grasshoppers, silk moth pupae, or lake flies, among 1,900 species eaten outside of the U.S. and Europe. In an effort to reverse the Western revulsion toward entomophagy, van Huis, van Gurp, and Dicke provide not only recipes—e.g., bugitos (grasshopper burritos), insect burgers (made with mealworms), and buglava (a mealworm-enriched variation on the layered pastry)—but also a wealth of information on which insects to eat, the nutritional and ecological benefits of a buggy diet, and where to procure the six-legged critters featured in the book. The authors also introduce politicians, scientists, and epicureans who all agree that insects should crawl their way onto more dinner plates around the globe.