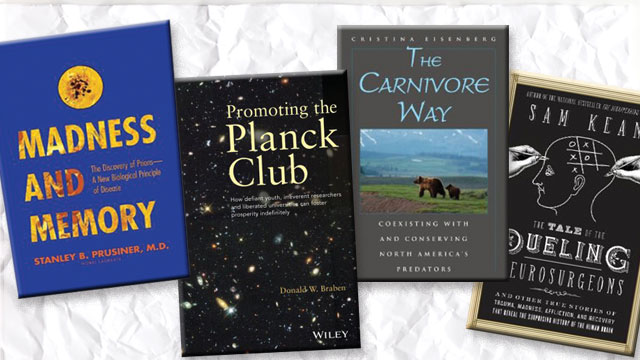 Madness and Memory: The Discovery of Prions—A New Biological Principle of Disease

Prions have been getting a lot of press lately. Now, the researcher who coined the term and discovered the often troublesome misfolded proteins brings readers the story of his groundbreaking work. In Madness and Memory, University of California, San Francisco, biochemist, neuroscientist, and Nobel laureate Stanley Prusiner proves himself just as capable a writer as he is a scientist.

Prusiner not only shares the fascinating path to discovery (and the personally painful ridicule) that attended his then-controversial research into the causative agents of scrapie, mad cow disease, and Creutzfeldt-Jakob disease, he also throws open the shutters on how the scientific process is shaped by collaboration and competition.

Part personal memoir and part scientific exposé, Prusiner’s book offers the types of behind-the-scenes insights that can only come from researchers...

Innovation is a modern buzzword, but once upon a time in science it was a substantive and challenging creative impulse that was more often met with skepticism and derision than with fanfare. Promoting the Planck Club celebrates those as the truly halcyon days of scientific advancement, and proposes a roadmap for the scientific enterprise to steer its course toward lofty heights once again.

Author and physicist Donald Braben highlights the revolutionary work of Max Planck, who at the turn of the 20th century shocked the world by injecting quantum physics into our understanding of the universe. Braben groups other scientific revolutionaries with Planck, whose insights not only redefined theoretical physics but led to myriad technologies that are ubiquitous today.

While Braben populates the titular “Planck Club” mostly with fellow physicists, life scientists will delight in his recounting of the lives and work of Oswald Avery, Barbara McClintock, and Carl Woese, among other biological luminaries. The tales culminate in Braben’s prescription for how science can “liberate human creativity from the current strangleholds that bind it”: reimagine peer review and channel venture funding to truly risky research.

The Carnivore Way: Coexisting With and Conserving North America’s Predators

By Cristina Eisenberg
Island Press, May 2014

Carnivores are in trouble the world over. Their populations are declining as humanity continues to spread out, and the ecosystems they anchor are likely not far behind. Nowhere is this ebbing more evident than among the mighty predators that stalk the North American landmass. Bears, wolves, mountain lions, wolverines, and others face omnipresent threats, sparking contention among wildlife managers, ranchers, hunters, ecologists, and environmentalists.

In The Carnivore Way, ecologist Cristina Eisenberg argues for the protection of North America’s big predators and their expansive habitats. As a researcher, she illustrates the creatures’ ecological importance as linchpins of their ecosystems, affecting the populations and dynamics not only of their prey, but of trophic levels throughout the system. She also urges cooperation among the various stakeholders whose livelihoods are impacted by the presence of large carnivores. Coexistence with carnivores is her steady mantra.

The Tale of the Dueling Neurosurgeons: The History of the Human Brain as Revealed by True Stories of Trauma, Madness, and Recovery

By Sam Kean
Little, Brown and Company, May 2014

In the modern age of neuroscience, MRI, fluorescent tags, optogenetics, and other recently hatched technologies yield unprecedented insights into the workings of the human brain. But before this technological renaissance, scientists relied upon freak accidents to punch windows into the all-important organ and shed light into the darkness that shrouded its functioning.

Historical brain traumas have made interesting fodder for books before, but in the capable hands of science writer Sam Kean, stories of brain injuries shine just a bit brighter, illuminating not only the interesting characters delivering bedside diagnoses or lying on the examination table, but general principles of scientific discovery that are still relevant today. From well-known cases, such as that of Phineas Gage, to lesser-known instances of brain injuries, like that of King Henri II of France—who was lobotomized through his eye during a jousting match—Kean breathes life into the patients as well as the physicians and scientists tasked with understanding the injuries.

Although these days we can peer into the human brain with amazing clarity, phenomena such as the neural roots of consciousness continue to resist elucidation. Researchers would do well to connect with the darker days of neuroscience to brace themselves for the journeys ahead.