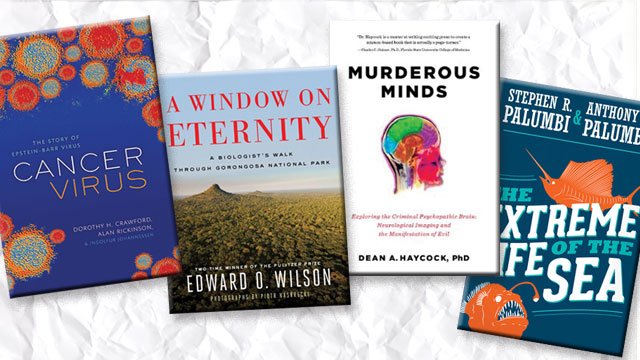 Cancer Virus: The Story of the Epstein-Barr Virus

The idea that viruses can cause cancer is somewhat commonplace in the scientific community these days. But it wasn’t always so. In 1964, British researchers Anthony Epstein, Bert Achong, and Yvonne Barr, studying childhood cancers that were cropping up in Africa, put a sample of tumor cells under an electron microscope and saw it swimming with virus particles. Although the researchers initially thought the particles were a common type of herpesvirus, they later discovered that it was in fact a new human herpesvirus that had caused the tumors they were studying.

In Cancer Virus, infectious disease researcher Dorothy Crawford, cancer scientist Alan Rickinson, and virologist Ingólfur Johannessen, tell the story of what was, at the time, still a revolutionary idea. The authors revisit the foundational work...

A Window on Eternity: A Biologist’s Walk Through Gorongosa National Park

The father of sociobiology and one of the most prolific science writers of our time, Edward O. Wilson is back with a new book that explores a slice of wilderness in deepest Africa. In A Window on Eternity, Wilson ventures outside the walls of Harvard University, and even beyond his boyhood haunts in Alabama cypress swamps, into the wilds of Mozambique’s Gorongosa National Park. He breathes just as much life into this landscape as he has into the old stomping grounds that inspired him to become a biologist. In 2011, the 82-year-old Wilson traversed the forested slopes of Mount Gorongosa, the grasslands in the mountain’s shadow, and the waterways that wind through the park, meticulously observing the many endemic animal species that populate the area, including his beloved ants.

As usual, Wilson’s observations carry more weight than the descriptions of a simple naturalist. In A Window, he invites us to glimpse ourselves in the mirror of one of Earth’s few remaining wildernesses. “[Wild places] provide hope for the immortality of life as a whole, freed of human cares and intervention and allowed to evolve as it did before we arose in Africa,” he writes at the end of the book. “While our species continues to manufacture its radically different and untested all-human world, the rest of life should be allowed to endure, for our own safety.”

The modern mind reels at the unconscionable acts perpetrated by some of our fellow humans. Every day international and local headlines tell of injustices, some too despicable to recount. Do the psychopathic culprits of awful, violent crimes owe their behavior, at least in part, to their biology? Is evil hardwired? According to Dean Haycock and his latest book, Murderous Minds,
the answer is yes.

Haycock presents scientific evidence that supports his position, including data from fMRI studies that point to physiological differences between the brains of criminal psychopaths and those of nonpsychopaths. But the existence of a neurologically identifiable signature in the brains of psychopaths is merely the tip of Haycock’s iceberg. The real tangle involves the implications—social, legal, judicial, and scientific—of the potential that we could predict someone would become a murderer from his or her brain scan. To explore the intricacies, the author profiles real-life criminals, such as the Columbine shooters Eric Harris and Dylan Klebold and the rapist and murderer Brian Dugan.

The Extreme Life of the Sea

Who doesn’t like reading about the fantastical creatures that stalk the inky depths of the world’s oceans? In The Extreme Life of the Sea, it’s the marine environment’s superlatives that are on display. The deepest-living isopod (the giant isopod), the oldest known animal (a 4,270-year-old coral off the coast of Hawaii), and the fastest fish (the sailfish) are among the characters thoroughly described by renowned marine biologist Stephen Palumbi and his writer son, Anthony.

Ticking off a list of curiosities about some of the ocean’s denizens is just bait that the father-son team dangles in front of readers before reeling them in to a more pressing message. Although the world’s seas are vast and its creatures weird and varied, they are also fragile. And climate change could wreak irrevocable havoc on the wonders, explored and undescribed alike, that live beneath the waves.