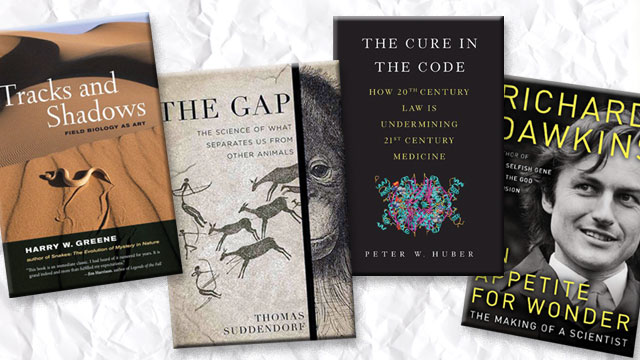 These days, with a constant stream of news announcing whiz-bang technologies from labs around the world, startling biological insights gleaned from model organisms, and experiments that lift the veil on the very fabric of our universe, it’s too easy to forget that science started outdoors. Our forbearers studied the world around them as they scratched out their existence in unforgiving environments and eventually observed the natural world for the sake of observing.

Harry Greene conjures the spirit of that embryonic curiosity in Tracks and Shadows, a book that chronicles his own journey from curious child to renowned snake biologist, while celebrating the wonder and wisdom of nature. Greene invites readers into his most intimate thoughts on the beauty and harshness of the living world and highlights the importance of engendering an appreciation...

The Gap: The Science of What Separates Us from Other Animals

Language. Culture. Morality. These are just a few of the attributes that humans like to imagine set our singular species apart from the rest of the animal kingdom. (I personally prefer, “the propensity to wear pants,” as a more succinct and less-complex answer to the question.) But even before these human constructs burst into a complexity not seen before or since in Kingdom Animalia, the capacity to imagine made us different from even our closest mammalian kin, argues Thomas Suddendorf in his book The Gap.

Suddendorf, a psychologist at the University of Queensland in Australia, posits that humankind’s ability to use our minds as time machines—travelling readily into the past and future to envision different scenarios—along with a strong desire to find common mental ground with members of our own species, nourished the growth of language, culture, religion, and other “uniquely human” endeavors. Perhaps most provocatively, Suddendorf proposes that the wide gulf between human beings and our animal kin may be of our own design. “The reason the current gap between animal and human minds seems so large and baffling,” he writes, “may be because we have destroyed the missing links.” Did Homo sapiens systematically exterminate other intelligent hominins? An interesting scenario to imagine.

The Cure in the Code: How 20th Century Law is Undermining 21st Century Medicine

Regulation is the bane of innovation—especially where cutting-edge medical research and development is concerned. This is the argument put forth by Peter Huber, lawyer and Manhattan Institute senior fellow, in his latest book, The Cure in the Code. If the United States is to bring revolutionary advances in genomics and modern drug development to the bedside in a way that will spark a concomitant revolution in treatment, regulators must rewrite anachronistic rules and regulations that became obsolete when medicine morphed from a blunt instrument to beat back infectious disease into a precision information industry.

From his decidedly conservative (read, antiregulation) viewpoint, Huber points up the differences between the age when widely deployed public-health campaigns vastly improved the health of the populace and the modern day, when the molecular technologies employed in drug development position us to be leaders in the uncharted territory of personal medicine. Repeatedly returning to his small-government touchstone, Huber rails against the FDA’s clinical-trial protocols, socialized medicine, and any public policy that impedes the invisible hand of the free market from placing the latest promising molecular nostrum in front of Americans. What he seemingly fails to appreciate, however, is that medicine, unlike many of the other technological advances that have changed our lives in the past 100 years, wields as much power to harm as it does to help.

An Appetite for Wonder:The Making of a Scientist

Richard Dawkins has made a career out of laying bare the evolutionary origins of things. But the Oxford man has rarely clued in readers to his own origin story. In An Appetite for Wonder, Dawkins traces his journey, from a child ignoring the grandeur of the African landscape in colonial Kenya to a preeminent scientist and intellectual.

That Dawkins comes from a long line of thinkers and writers is not surprising. But his memoir contains many other nuggets that shed unexpected light on the man he would become. For example, upon returning to England from Kenya, a teenage Dawkins—who grew to be one of the most outspoken atheists on Earth—had a fling with religiosity enforced by, of all things, Elvis Presley’s 1957 album “Peace in the Valley.”

“I am not proud of this period of religious frenzy,” Dawkins writes, “and I’m happy to say that it didn’t last long.” Charles Darwin’s influence would overgrow that of the King of Rock and Roll in Dawkins’s mind, and the future evolutionarily biologist would cast off all vestiges of religious belief by the time he was 17.

With his typical wit and eloquence, Dawkins detours from elucidating the makings of every other living thing to share the forces that shaped him.