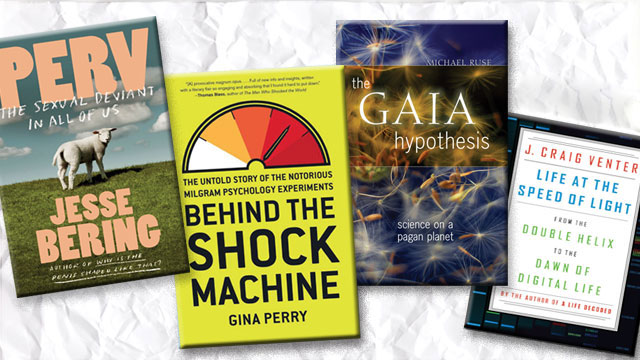 Perv: The Sexual Deviant in All of Us

Science writer extraordinaire and erstwhile psychologist Jesse Bering has again plumbed the depths of human sexuality in his latest offering, Perv. After last year’s Why is the Penis Shaped Like That?, Bering again demonstrates that he feels right at home exploring the more salacious aspects of the human condition. In Perv, Bering deconstructs scores of “paraphilias,” which he defines as “sexual orientations toward people or things that most of us wouldn’t consider to be particularly erotic.” He injects a fair amount of historical and societal perspective into his treatment of both well-known and rarer ones: acrotomophilia (arousal to amputees), lithophilia (arousal to stone and gravel), and psychrophilia (arousal to being cold and watching others who are cold), to name a few.

Against a colorful backdrop of science, history, and...

Behind the Shock Machine: The Untold Story of the Notorious Milgram Psychology Experiments

It’s classic psychology-textbook fodder: in 1961 Yale professor Stanley Milgram conducted experiments in which paid subjects were made to believe that they were delivering electric shocks to another person for failing at memory tasks. The work showed that a surprising proportion of test subjects were willing, with prodding from Milgram, to inflict the maximum 450-volt shock (though it wasn’t actually delivered) to fellow test subjects (actors pretending to get shocked).

Though Milgram’s controversial experiments have been dissected in psychological and ethical circles for decades, no one had ventured to take a good, hard look at the data and lives behind the study until now. Australian psychologist Gina Perry tracked down some of Milgram’s test subjects and dug through his unpublished data to uncover startling truths, which she divulges in Behind the Shock Machine. Among them: Milgram’s oft-cited statistic that 65 percent of test subjects were obedient and willing to administer painful shocks is somewhat off. In reality, only 56 percent of the test subjects fully believed the shocks were real, and of those, two-thirds proved disobedient, refusing to deliver the most painful shocks. Perry also determined that some of those subjects who believed they were really shocking people weren’t properly debriefed and continued believing the ruse for years after the experiments concluded.

Will Perry’s exposé of the infamous Milgram experiments rewrite the textbooks? Probably not, but this book certainly deserves the attention of serious students of psychology.

The Gaia Hypothesis: Science on a Pagan Planet

By Michael Ruse
The University of Chicago Press, September 2013

The entire Earth functions as a living, self-regulating organism, each of its individual life-forms unconsciously striving for the overall betterment of the planet. Philosopher of science Michael Ruse makes that idea, called the Gaia Hypothesis, the title and focus of his latest book.

While countless tomes have explored the intricacies of the hypothesis—most notably James Lovelock’s own Gaia: A New Look at Life on Earth (1979)—Ruse’s latest effort digs into the societal and philosophical impacts of the concept. The author considers the viewpoints of Gaia’s supporters, such as Lovelock’s frequent collaborator, the equally controversial biologist Lynn Margulis, and vociferous detractors, like Stephen J. Gould and Richard Dawkins, who have dismissed the hypothesis as teleological pseudoscience.

In the end, Ruse comes down more on the side of Gaia fan than Gaia foe, commending Lovelock and Margulis for their injection of philosophy into the scientific discourse at a time when the environmental movement had little idea of what hurdles lay ahead. “Lovelock and Margulis were big people with a big vision,” Ruse writes. “Whether science likes it or not, the vision lives on.”

Life at the Speed of Light: From the Double Helix to the Dawn of Digital Life

Synthetic genomics gets the J. Craig Venter treatment in this latest book from the maverick scientist who was instrumental in creating the private-versus-government tension that marked the race to sequence the human genome. In Life at the Speed of Light, Venter recounts his team’s effort in 2008 to synthesize the first complete man-made genome, a 582,970 base-pair stretch of Mycoplasma genitalium DNA, and the subsequent advances, such as transferring the synthetic genome into a living cell that then “booted up” the genetic program, that occurred at the J. Craig Venter Institute.

When he’s not tooting his own horn in Life, Venter discusses the ethical implications and societal ramifications of synthetic genomics, stressing that debate surrounding these emerging technologies is healthy and necessary. Venter ventures into some pretty futuristic territory in the latter part of the book, hitting on the science behind “biological teleportation,” a digitization process that could potentially shoot the DNA to build synthetic phages around the globe to battle drug-resistant microbes.