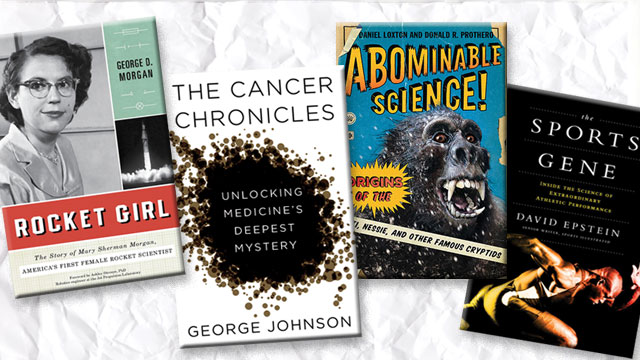 Mary Sherman Morgan may not be a name that’s mentioned among those in the pantheon of modern science. But according to Rocket Girl, the story of Morgan’s life and contributions to the field of rocket science, it should be. In 1957, Sherman Morgan invented the liquid fuel—hydyne—which powered the rocket that carried America’s first satellite into orbit, and “helped usher in the Space Age,” according to author George Morgan, her son. Her success in developing rocket propellants righted the course of American rocketry during the Cold War after the Soviet Union embarrassed US rocket scientists with the launches of Sputniks I and II.

Sadly, though, like those of biology’s Rosalind Franklin, Sherman Morgan’s contributions would go unrecognized by the field and unrecorded by history. Her son’s book...

In The Cancer Chronicles, George Johnson, like a science-writing alchemist, transforms his fear—fueled by his wife Nancy’s metastatic-cancer diagnosis—into gold, in the form of a well-written and thoroughly researched exploration of the current state of cancer science. Johnson journeys through labs bent on cracking cancer’s code, ferreting out its causes, its molecular eccentricities, and its treatment. His wife’s struggle with the disease serves as a constant touchstone without subsuming his sober treatment of evidence, data, and reason.

Johnson also ranges widely across time and disciplines to capture facets of cancer research from fields as diverse as physics and epidemiology, chemistry and paleontology, while still communicating the human side of the disease through the people who suffer from and strive to treat it. The author has added a sympathetic and consummately informative contribution to the growing body of popular nonfiction trained on a foe that continues to plague humanity and largely elude the grasp of science and medicine.

Abominable Science! Origins of the Yeti, Nessie, and Other Famous Cryptids

Mythical creatures like the Loch Ness Monster and Bigfoot typically don’t appear in serious books about science. But those books aren’t Abominable Science! In its pages, science writer Daniel Loxton and bona fide paleontologist Donald Prothero team up to take a good hard look at cryptozoology—that fringe branch of biology (some call it a pseudoscience) that seeks to unearth any shred of evidence for creatures whose very existence remains firmly unproven. While most of the book serves as an encyclopedia of sorts—listing a variety of cryptids, giving evidence for (scant) and against (abundant) their actual presence on Earth, and surveying their persistence in a wide variety of cultures, both past and present—the final chapter is where the book gets most interesting.

In it, Loxton and Prothero lay bare the psychological roots of why such mythical creatures exist in our own minds. They surmise that people, ancient and modern alike, need to believe in monsters that they can’t see (or ghosts they can) for a variety of reasons: out of a need for control; as a side effect of believing in other supernatural systems, such as religion; because they are mentally ill; or a combination of those.

The Sports Gene: Inside the Science of Extraordinary Athletic Performance

The Sports Gene confronts head-on some of the most taboo subjects at the intersection of athletics and science. Are black athletes genetically predetermined to dominate running events? Are men gifted with more natural athletic prowess than women? David Epstein, Sports Illustrated senior writer and former environmental science graduate student, fearlessly researches these questions, traversing the globe from equatorial Africa to the Arctic Circle, and visiting baseball diamonds, basketball courts, Olympic tracks, and (of course) laboratories in search of answers.

In a crystalline example of the kind of ambiguity that accompanies such answers, Epstein cogitates on the influence of genetics on sprinting ability. For example: Does the fact that nearly all Jamaicans (including world-famous sprinter Usain Bolt) possess the fast version of a “sprint gene,” ACTN3, among other unique gene profiles, account for the fact that people of Jamaican descent dominate the world sprinting scene? Reporting on the sequencing work and contrasting conclusions of Yannis Pitsiladis, a University of Glasgow biologist, and famed Jamaican researcher Errol Morrison, the author comes down somewhere in the middle of the nature (Jamaicans do have a somewhat unique genetic profile resulting from their African heritage mixed with genes from native Caribbean tribes) vs. nurture (the island nation has a robust system for finding and training world-class sprinters) debate.