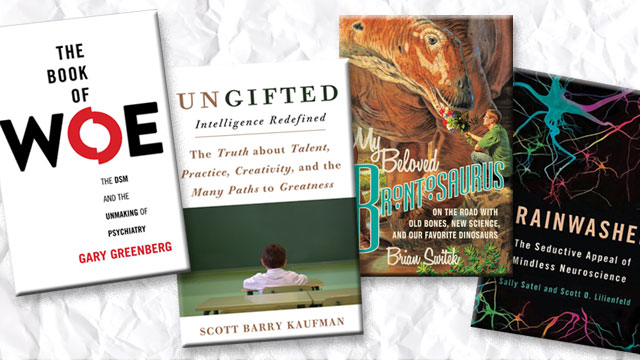 The Book of Woe: The DSM and the Unmaking of Psychiatry

While the life sciences escaped “physics envy” via molecular biology, psychiatry still languishes in “pathology envy”—a longing for discrete, organic disease entities that can be tracked down to cellular drug targets. As long as the brain resists such decoding, what mind medics have instead is the American Psychiatric Association’s Diagnostic and Statistical Manual of Mental Disorders. Even before DSM-5 was released last month, The Book of Woe was waiting to ambush it.

Gary Greenberg, a self-described “lunchbucket therapist,” uses DSM codes to get paid for helping people grapple with life and self. He has written both an inside history of the tome’s scientific aspirations—how III exorcised Freud and IV defined disorders empirically, by their symptoms—and an appallingly funny exposé of DSM-5 ’s all-too-human genesis.

Because of early ear infections, Scott Barry Kaufman received a “learning disabled” label that dogged him through a grade-school wasteland of bullying, boredom, and an IQ depressed by testers’ self-fulfilling assumptions. But rather than crumbling, Kaufman became fascinated by how we define and measure intelligence—and battled his way to a PhD in psychology at Yale University. Perhaps no one else could have written this book, a warmly human and coolly scientific survey of both the reductive and the liberating fruits of two centuries of cognitive research.

The history of IQ testing; the “neurodiversity” and “multiple intelligences” movements; the ultimate irrelevance of genetic studies (smarts appear to be partly heritable but wildly polygenic and variable); the different definitions of and approaches to “learning disabled” and “gifted” children: from this stew of studies emerge fascinating and heartening conclusions. Labels stifle souls. Regarding intelligence or talent as a fixed trait is harmful—and wrong. The learnable skill of self-regulation predicts outcomes much better than IQ does. Intrinsic motivation rocks. “Deliberate practice,” the path to excellence, involves both strategic inner structuring of knowledge and . . . hope. Education, reimagined, could elicit the best from each.

My Beloved Brontosaurus: On the Road with Old Bones, New Science, and Our Favorite Dinosaurs

Journey back through the steamy jungles of your childhood fantasies (or into your children’s current or past dreams) on this romp through the Mesozoic guided by science writer Brian Switek. In My Beloved Brontosaurus, Switek’s own childhood fascination with the towering lizards fuels the trip as he recounts interesting tidbits from fossil hunts of yore and updates past and present dinosaur lovers with paleontological gems.

In a sterling example of his ability to weave scientific information with personal anecdote, Switek laments the fall of his titular beast, writing: “A bulky hill of animate flesh, ‘Brontosaurus’ was the titanic epitome of what it was to be a dinosaur.” The animal suffered two extinctions, the author explains. One happened more than 150 million years ago, when a bevy of dinosaur species were wiped from the Earth, most likely as a result of a cosmic cataclysm. The second blow came in 1903 when researchers surmised that the “Brontosaurus” was actually another species—Apatosaurus—and barred the term from science, although the thunder lizard lived on in common parlance. Upon learning of his favorite dino’s demise many years later, Switek was crushed. “I remember her fondly,” he writes. “The long-necked titan was my introduction to how magnificent dinosaurs were, but she evaporated into the scientific ether just as soon as I met her.”

“Brains are hot,” Sally Satel and Scott O. Lilienfeld acknowledge in Brainwashed, their “exposé of mindless neuroscience” (mostly practiced not by neuroscientists, they stress, but by “neuropundits,” among others). The “mediagenic” technology of fMRI imaging has made the brain, aglow with metabolic hotspots, into a rainbow emblem of the faith that science will soon empower us to explain, control, expose, exploit, or excuse every wayward human behavior from buying to lying, from craving to crime.

Not so fast, suggest the authors, a psychiatrist and a psychologist. The infant science of “brain imaging cannot do any of these things—at least not yet.” When prematurely kidnapped from the laboratory, at best it tells us things we already know, like that our buying choices are a balancing act between impulse and prudence. At worst, in courtroom and clinic, it can be used to negate a moral agency we in fact possess: experienced at treating addiction, the authors assert that contrary to myth, addicts can—and most do—quit. Faddish brain-scan parsing amounts to “neophrenology” because no brain area has only one function, and no function is localized to one area. Brainwashed is a reasoned, humane addition to the growing “neuroskeptic” bookshelf.