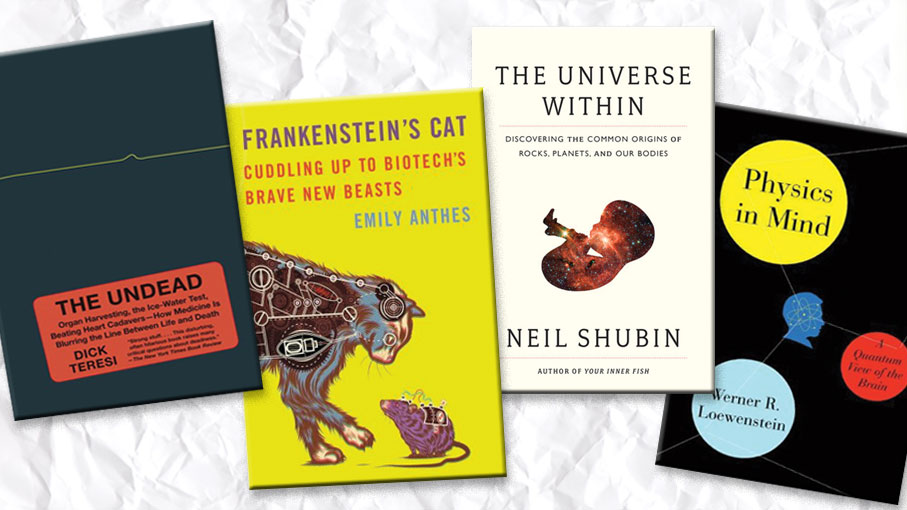 The Undead: Organ Harvesting, the Ice-Water Test, Beating Heart Cadavers—How Medicine Is Blurring the Line Between Life and Death

What’s not to like about organ transplantation? A heroic technological feat that gives life to the suffering and avoids wasting lives tragically cut short, it’s even good for the economy, reaping $20 billion a year. Veteran science journalist Dick Teresi, too, had checked the box on his driver’s license—until he discovered that some “brain-dead” donors might not be dead.

Historical research revealed that determining death has never been a simple matter; certain medical states can mimic it—hence earlier centuries’ fears of being buried alive. Safest, traditionally, was to wait three days until decomposition began. “Brain death” became the new criterion in 1968, just as transplantation ramped up, but few know that not even an EEG is required, just clinical signs that aren’t foolproof....

The nature/technology interface is a fast-advancing, blurring frontier, where unnerving new powers are arming the age-old, contradictory human drives to understand, control, exploit, improve, and protect our fellow beings. This is the turf staked out by MIT-trained science journalist Emily Anthes, whose “biotech” includes everything from cloned pets, livestock, and endangered species to transgenic “pharm” animals that make drugs in their milk; from marine-mammal “colleagues” whose data-logging tags help map ocean conditions to robotically controlled military spy beetles.

Though alert to animal suffering, Anthes decries overzealous activists and overcautious regulators who hold back the good such biotech advances could do. While her fear-soothing sometimes seems naive and overly optimistic, the researchers she quotes take their ethical responsibilities reassuringly seriously. Frankenstein’s Cat aims at a popular audience; and can veer into cliche and condescension. But Anthes shines in first-person forays to a tuna research facility in Monterey and an endangered-species-nurturing “ark” near New Orleans.

The Universe Within: Discovering the Common History of Rocks, Planets, and People

The word “religion” literally means “reconnecting,” and if science can be accused of displacing religion, it is also reconnecting us to our origins through a new creation story that is not merely imagined, because we have the means to discover it. Neil Shubin’s new book of revelations is an essential contribution to that story, connecting many of the missing links in the great chain of creation that led from our first “ancestor”—the slight imbalance of matter and antimatter in the newborn universe—through exploding stars, single cells, walking fish, and mouse-size mammals to us, and onward.

Paleontologist Shubin (author of Your Inner Fish) fills gaps of two kinds in the record. One is the sculpting role played by cosmic and geological events in the evolution of life—and the ways life reciprocated, profoundly altering atmosphere and geology. The other is the little-known names and stories of men and women to whose visionary stubbornness we owe vital pieces of the puzzle, from variable stars to plate tectonics.

Physics in Mind: A Quantum View of the Brain

Niels Bohr once famously said, “Anyone who isn’t confused by quantum theory doesn’t really understand it.” Quoted in biophysicist Werner Loewenstein’s ambitious new exploration of how the brain processes information, Bohr’s words could have been its epigraph. Billed as “written for the general reader with an interest in science,” Physics in Mind will find a rather more select audience: computer-hardware nerds bent on biomimicry, perhaps, and biologists willing to endure the friendly condescension of a physicist as the price of a provocative journey.

In a witty, chatty, erudite voice, Loewenstein follows the path of visual, olfactory, and tactile stimuli through the evolution of increasingly complex molecules and life-forms, and from the periphery to the center of the mammalian nervous system. In terms of information and entropy, particles and waves, he shows how each level of processing prunes the information stream for relevance until what reaches the cortex is lean, meaning-laden, and pertinent to survival. We now know how the brain breaks down sensory data for rapid parallel processing, but not yet how it’s reassembled—or what consciousness is, Loewenstein admits. That the answer may be quantum is hinted at by rhodopsins, proteins whose femtosecond juggling of photons far transcends Newtonian physics.