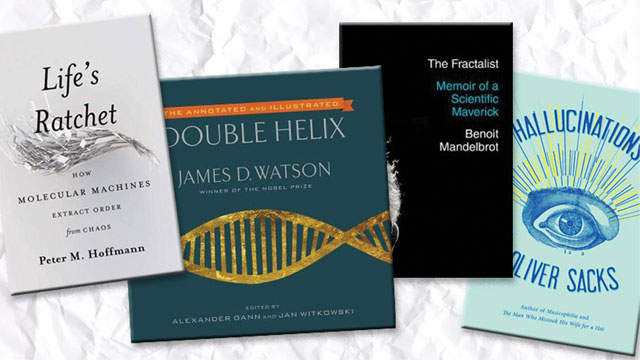 What distinguishes life from its nonliving ingredients? How could life arise from the lifeless? These questions have vexed philosophers and scientists for more than 2,500 years. Bio-besotted physicist Peter Hoffmann wrote Life’s Ratchet to get to the beating heart of the matter. After a lively, lucid grand tour of the controversy’s history—featuring prescient thinkers you’ve probably never heard of (Julien Offray de La Mettrie? D’Arcy Wentworth Thompson?)—Hoffman arrives at modern molecular biology and the technological breakthroughs, such as atomic force microscopy, that enable us to see the very atoms of a cell.

The secret of life, he says, is not some “vital force,” but the unique operations of the second law of thermodynamics at the nanoscale, where molecular machines from kinesins to DNA synthase, fueled by ATP, can harness the energy of the...


The Annotated and Illustrated Double Helix

When Nobel laureate James Watson first published The Double Helix in 1968—over the protests of fellow scientists including his collaborator, Francis Crick (who later relented)—it was hailed as both a breathless detective story about solving the structure of DNA and a brazenly witty exposé of the human side of science. This double whammy made the book an instant best seller, and it’s still a gripping, amusing read. What’s added in this enriched edition is extensive illustration and documentation that brings scientific history to life. When a scientist is named, the reader sees his or her face—and, often, house, spouse, or lover. The Cold War lives on in a State Department telegram demanding that Linus Pauling swear he was never a Communist Party member. Cambridge University’s august buildings brood serenely, incubating thought. Typed and handwritten letters provide poignant details. Watson’s viewpoint gets a Rashomon-like rounding out by others’; new light is shed on “Rosy” Franklin’s contribution, and on the uproar around the book’s publication. This is, simply, a must have—a collector’s item.


The Fractalist: Memoir of a Scientific Maverick

The “long, meandering ride” that was the life of mathematical magus Benoit Mandelbrot (b. 1924) ended October 14, 2010, before he could finish revising this book. The discoverer of fractals—formulae that not only generate inexhaustibly intricate images, but tease out common rules of “roughness” governing geology, biology, meteorology, linguistics, and finance—Mandelbrot was never drawn to pure mathematics divorced from the actual world. The best parts of his uneven memoir are a captivating meditation on the congruence between a jagged life course and the torrent of insight that was shaped by it.

The best parts come first, as Mandelbrot dwells on the formative influences that would later bear such prickly, revelatory fruit: a Lithuanian Jewish family that prized intellect above all, but wily practical resourcefulness a close second; a series of cataclysmic uprootings, Warsaw to Paris to unoccupied southern France, as the family stayed just ahead of the Nazis; a fitful education of equal parts tutoring by uncles, “reading and dreaming,” acing elite exams, and hiding out as a toolmaker and horse groom.

The master is back. NYU School of Medicine neurologist and neuroscience popularizer supreme Oliver Sacks scores another triumph with his latest incursion into the human mind and all its foibles, Hallucinations. In typical Sacksian style, the author of Awakenings, The Man Who Mistook His Wife for a Hat, and Musicophilia, among other great titles, wades again into the human mind, prospecting for golden themes connecting the loosely related case studies of remarkable patients. From the blind nursing-home patient who “saw” crowds of people in “Eastern dress” milling about in her room to people who hear phantom strains of “God Bless Americas” or smell foods and flowers that aren’t actually there, Sacks introduces us to a vibrant cast of hallucinating characters, many of whom were his patients.

Sacks’s tour of the brain’s hallucinatory machinery offers readers vivid descriptions of illicit drug trips (some, experienced by the author himself) and pre-sleep pseudo-dream sequences, among other visions. As ever, Sacks successfully cracks open the human brain and gives insight into its functioning by highlighting curious cases of its malfunctioning. His deep, rich experience of peering into the workings of the human mind, along with his gift for weaving together history, medical case study, and cutting-edge neuroscience, result in another must-read from the tireless neurologist. And that’s no hallucination.