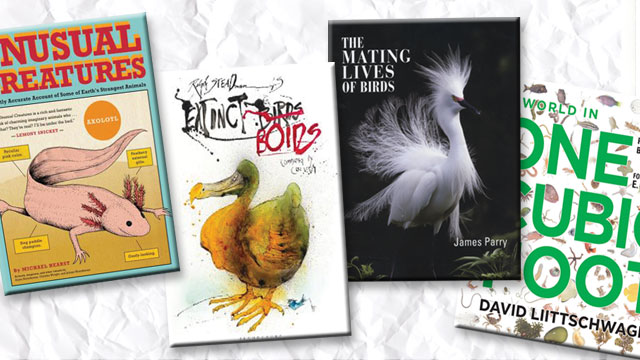 Unusual Creatures: A Mostly Accurate Account of Some of Earth’s
Strangest Animals

The nebbishy, sad-looking face on this book’s title page belongs to a blobfish. The solenodon, a small mammal, has a ball-and-socket joint at the base of its long, flexible snout. The eel-like hagfish has four hearts and can tie itself in a knot to wipe off its own copious coating of slime. The pink fairy armadillo looks like a cross between a hamster and a lobster. Salvador Dalí walked a giant anteater on a leash. These are among the 50 “unusual creatures” featured in this book, all of which, says author Michael Hearst, have one thing in common: they make you go, “Whoa, dude! What’s up with that?” Many, unfortunately, are also endangered.
Designed by a hip young international creative team...

Unusual Creatures mixes real learning about classification, adaptation, and biodiversity with enough silly fake facts and other high-spirited goofing to make the info go down easy. Both kids and parents will enjoy the simply colored, handbook-like illustrations and the gee-whiz details about each creature. Alas, it’s one of those books that’s good enough to make you wish it was even better: the humor wittier, the little poems catchier, the science less scattershot.

Curating an art show on avian extinction as a benefit for endangered species, filmmaker Ceri Levy asked idiosyncratic illustrator Ralph Steadman (of Fear and Loathing in Las Vegas fame) to contribute one piece—and got 100. Something about the “dark subject” of extinction applied to the vivid weirdness of birds tapped a gusher, and Steadman, you might say, went Audubonkers. “This will become a magnum opus,” Levy predicted, and indeed, it has.

Brilliantly colored, with a dashing felicity of stroke and composition remindful of Zen brush painting, these portraits of both birds that are no more and “boids” that never were prove Steadman a master artist. Some, like the (real) Oahu ‘O’o, are flat-out beautiful. Others, like the (fantastic) Gobswallow, are explosively zany and menacing, insuring that the denizens of Toadstool Island (a sort of bird-sanctuary afterlife) need never face hunters or developers, rats or cats—or trigger-happy naturalists—again. It’s almost shamanic how expressively the birds’ body language, beaks, and eyes channel every emotion—shock, despair, indignation, stoicism, hysteria—that onrushing extinction might evoke. The result is a laughter-splattered catharsis of the guilt and grief we feel at human destructiveness—and part of the proceeds go to conservation.

The Mating Lives of Birds

It’s a rare achievement to create a beautiful hardcover coffee-table book that’s compact and light enough to hold in one hand, much less to pack into that economical space a very serviceable overview of bird reproduction in all its extravagant variety. Wildlife writer James Parry is a Brit, as you can tell from the understated prose that accompanies the gorgeous color images by many photographers, and his vantage point is European. But his coverage of the subject is evenhandedly global. Mostly in two-page spreads illustrated by birds from two or three continents, Parry walks us through the avian life cycle in both its universals and its credulity-straining particulars, calmly attributed to the resources and challenges of different ecosystems and the forces of natural and sexual selection.

Mating itself, usually brief, occupies a single two-page spread; most of the book, like most of birds’ energy, is devoted to the lengths they go to before, to win a mate or mates, and after, to assure their progeny’s survival. Plumage, courtship and bonding dances, some species’ intricate bower and nest structures and others’ slapdash opportunism, egg camouflage, and brooding strategies—all told, this book showcases evolution as an even weirder master artist than Ralph Steadman.

A World in One Cubic Foot: Portraits of Biodiversity

In 2007, this publisher won the “most beautiful science book” award (mine, anyway) with The Deep, a fantastic voyage to the abyss and seafloor. Now the University of Chicago Press does it again with this stunning concept and book design chronicling the visible, mostly tiny (1 mm or bigger) biodiversity inhabiting and traversing 1 cubic foot within six very different ecosystems, each sample demarcated by the same open-faced cube of green stainless-steel rods.

Ironically, the fauna and flora whose inextricable interdependence E.O. Wilson celebrates in his foreword are isolated, each on a white background. But this presentation highlights the unique, belief-beggaring detail of each creature with a nearly surreal clarity: the internal organs of a translucent earthworm or crab larva, the electric iridescence of a beetle or tropical fish, the textures of leaf, antenna, tentacle, feather, and fur. A visually captivating key identifies each denizen of Polynesian coral reef, Costa Rican cloud forest, Tennessee fishin’ hole, Central Park enclave, and more. Brief essays by scientists, journalists, and poets try with varying success to restore the tangled ecological contexts for these visual jewels.