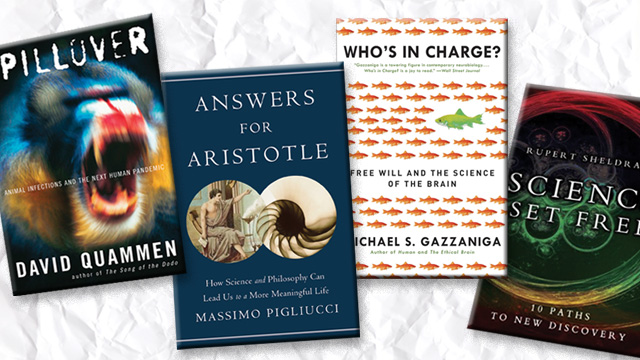 Spillover: Animal Infections and the Next Human Pandemic

“The Next Big One” (NBO), in David Quammen’s parlance, is the heir apparent to the Black Death, smallpox, Spanish flu, polio, and AIDS: the next dread disease to scythe at least a seven-figure swath through humanity. Like AIDS, it’s apt to be a zoonosis—a viral or bacterial disease that “spills over” from an animal “reservoir host” to humans, perhaps after expansion in another animal “amplifier host.” The premise of Quammen’s frightening, engrossing new book, researched in Australia, Africa, China, and beyond over more than a decade, is that the NBO is not a matter of if, but when.

A master of making complex science unintimidating without dumbing it down, Quammen lays out the basics of zoonotic ecology and epidemiology with spellbinding clarity. Then, towing the reader along through Congolese jungles, South Chinese bat...

Answers for Aristotle: How Science and Philosophy Can Lead Us
to a More Meaningful Life

Biologist-turned-philosopher Massimo Pigliucci starts off his new book with a promising proposition: “Sci-Phi”—a guidance system for the good life in which science furnishes the facts and philosophy supplies the values. Unfortunately, the promise remains unfulfilled, as the combination brings out the worst in each ingredient: in the light of philosophy, science looks particularly reductive, but in return, science renders philosophy all but irrelevant. Pigliucci, who battled against creationism, doesn’t seem to realize that cognitive neuroscience and evolutionary psychology deal philosophy nearly as killing a blow as they do religion.

Aristotle said man is the rational animal; Pigliucci calls us, rather, the rationalizing animal—we overwhelmingly use our prefrontal cortex to justify what our amygdala commands. Altruism serves the selfish gene; morality repurposes repugnance at foul smells; love’s ebb and flow is a survival-tuned tide of neurohormones. By alerting us to these neural shenanigans, science can support our flicker of free will, which consists mostly in the uphill struggle to say no to impulses—sometimes dubbed “free won’t.” The book’s briefest chapter is on friendship, the ancients’ jewel of humanity. At least it isn’t traced back to chimpanzee alliances.

Who’s in Charge? Free Will and the Science of the Brain

Pioneering cognitive neuroscientist Michael Gazzaniga’s newest book is an intellectual thriller that attempts to rescue the human and legal sense of personal responsibility—held hostage by the “hard determinism” of his own colleagues—without resorting to mind-brain dualism. Yes, Gazzaniga avers, the brain is a biological “decision machine,” hard-wired in many respects by natural selection. He guides an insider’s tour of research that has revealed a parallel-processing assembly of numerous highly specialized modules, operating largely automatically and unconsciously—therefore swiftly and deftly. Our illusion of a central, choosing self turns out to be the work of one left-brain module, the “interpreter,” which scripts a narrative, complete with lies, to make post-hoc sense of our own behavior.

But this is not the bleakly deterministic picture it appears to be, Gazzaniga says, because at a sufficient level of statistical complexity—as shown by chaos theory and quantum mechanics—materially determined events become unpredictable and because mind, culture, and civilization are “emergent” properties that affect the levels of organization they emerge from. Gazzaniga blazes a trail for true “Sci-Phi”—a philosophy emergent from science.

An earlier book by this British biologist, A New Science of Life, was famously decreed fit “for burning” by Nature because it proposed nonmaterial “morphogenetic fields” outside time and space that might direct cosmic and embryonic development, store both human and evolutionary memories, and more. Unsinged, Rupert Sheldrake coolly reiterates his heresies, challenging life scientists to honor their field’s fearless investigative ideal by turning what have become unchallengeable assumptions—that nature is material, mechanical, unconscious, and purposeless—back into questions.

The most powerful part of this book is its tour of the history of ideas, revealing the prescientific archetypes and metaphors that still covertly shape scientific thinking. Because Sheldrake’s morphogenetic theory is speculative and hard to test (but easier than string theory!), and because he has chosen to test it by means of parapsychological phenomena (among other things), he may win few scientist converts to his own view of nature. As epigenetics and the genome’s “dark matter” push us toward the brink of a possible paradigm shift, however, life scientists should not reflexively reject the challenge to reexamine 19th-century assumptions that physics has already shattered.