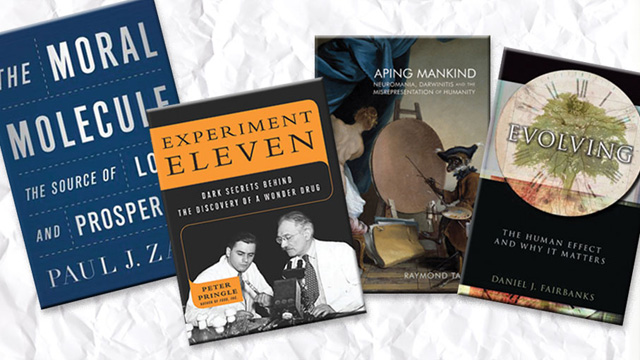 Evolving: The Human Effect and Why It Matters

Humans too often view evolution through the lens of the past tense. We extant hominins seem to prefer looking back upon the sweep of our evolutionary history as a nature lover might admire the course of a rushing river, perched safely on its banks. But now more than ever, argues geneticist Daniel Fairbanks, we must climb down into that river and realize that we’re still subject to its eddies, swirls, and riffles.

In his latest book, Evolving, Fairbanks reconstructs the typical pillars of support for evolution—peppered moths, the human fossil record, etc.—while laying out a convincing case for how important it is to recognize that evolution (of both nonhuman and human organisms, both past and ongoing) has real impacts upon our lives and the state of our world today. From health and food production...

The Moral Molecule: The Source of Love and Prosperity

Neuroeconomist Paul Zak is renowned for discovering that oxytocin—a hormone that is also a neurotransmitter—is central to the display of caring and trusting behaviors between unacquainted humans. And oxytocin is the focus of his latest book, The Moral Molecule. In it, Zak takes the reader from the jungles of Papua New Guinea—where he measures the oxytocin levels of tribal warriors immediately before and after they perform a ritual dance—to his Claremont Graduate University lab, and to the back door of an airplane, which he jumps out of to track changes in his oxytocin levels before and after the skydive.

The antireductionists among us might bristle at Zak’s suggestion that one little molecule is the key to such a complex swatch of human behaviors. But The Moral Molecule is nonetheless a riveting tale of Zak’s quest to track down the function of oxytocin, and in the end he makes quite a strong case for the link between the molecule and trust, empathy, and morality.

Never one to shy away from controversial viewpoints, retired physician and neuroscientist Raymond Tallis rails against a couple of entrenched biological notions in his latest book, Aping Mankind. First, Tallis rejects an “inflamed mode of Darwinian thought” he terms “Darwinitis” that amounts to antihumanism and a general pessimism that human beings can ever transcend their animal nature. “If . . . we humans are no different from all other animals,” he asks, “how did we dream up the idea that we are different?”

Tallis’s second gripe is with what he calls “neuromania”—the overestimation of what neuroscience can tell us about human consciousness, the thing that really sets us apart from the rest of animal life. One can almost imagine neuroscience’s godheads, such as Eric Kandel, chafing at Tallis’s suggestion that their discipline is powerless to fully explain consciousness, behavior, culture, and society. Tallis has written on this subject before, in books such as Why the Mind is Not a Computer and The Kingdom of Infinite Space, but his focus seems sharper in Aping Mankind, his patience worn thinner.

Experiment Eleven: Dark Secrets Behind the Discovery of a Wonder Drug

Science history is strewn with true tales of betrayal and intellectual thievery. Such a story unfolds in the pages of Experiment Eleven, the latest book from veteran nonfiction author and British newspaper foreign correspondent Peter Pringle.

The book lays bare the deceit that attended the discovery of streptomycin in 1943. Rutgers University student Albert Schatz discovered the antibiotic, which would in time become one of the first blockbuster pharmaceuticals, while conducting experiments on bacteria in soil samples collected from farms neighboring the university’s New Jersey campus. Less than 10 years after Schatz discovered the compound, the Nobel Prize would be awarded for the accomplishment. But it was not awarded to Schatz.

It was instead given to Schatz’s advisor, Rutgers professor Selman Waksman, who had claimed credit for the discovery and lined his pockets with the royalties from mounting sales of the antibiotic. After being blackballed by the scientific establishment for trying to sue Waksman and Rutgers for the injustice, Schatz fled to Chile, disgraced and elbowed out of the history books. More brazen than Watson and Crick’s treatment of Rosalind Franklin and more mean-spirited than Hwang’s phony embryo cloning, the story of streptomycin’s discovery is both a riveting chapter from science’s darker corners and a cautionary tale that is still relevant today.