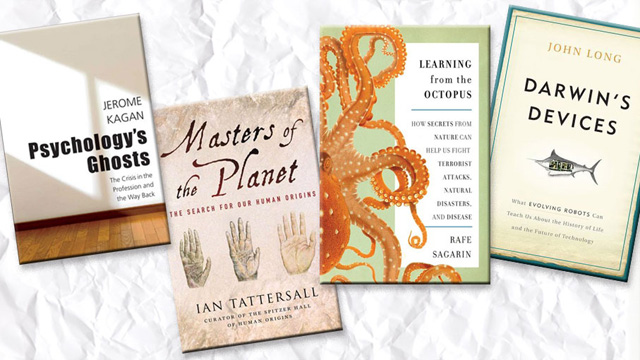 Masters of the Planet: The Search for our Human Origins

How did Homo sapiens arise from a ragtag ancestral line, scratching out an existence and competing with kindred species in harshest Africa, to become one of the most successful organism in Earth’s history? Researchers have been digging for answers to this question for decades, and paleoanthropologist Ian Tattersall finds in the quest fodder for his latest book, Masters of the Planet.

The transformation that “levered humankind away from the ‘lower’ animals,” according to the author, was acquiring the complex array of traits that set us apart first from the rest of animal life and then from all the other hominid species in a relatively rapid evolutionary flourish. In our once unremarkable lineage, bipedality, symbolic...

Tattersall masterfully retraces our species’ evolutionary steps but manages to keep our meteoric rise to global domination in perspective. “Remarkable as we may think we are,” he writes, “we are actually the product of a routine biological process.”

Learning from the Octopus: How Secrets from Nature Can HelpUs Fight Terrorist Attacks, Natural Disasters, and Disease

The cognitive prowess of octopuses is legendary: they can unscrew jar lids and climb inside, escape the confines of laboratory aquaria, and have even been observed using coconut shells as rudimentary tools. But can the clever cephalopods thwart terrorist attacks? Sort of, argues University of Arizona marine ecologist Rafe Sagarin in Learning from the Octopus.

Taking cues on adaptability from the octopus and other wily animals can help humans guard against threats of all sorts—natural disasters, enemy attacks, and infectious pandemics—argues Sagarin. Carefully observing natural defense systems, such as the octopus’s remarkably sensitive skin or the multifaceted mammalian immune system, can assist human society in achieving effective national defense strategies.

“The millions of biological organisms on Earth have been adapting to environmental change and catastrophe for 3.5 billion years,” Sagarin writes, “a knowledge base unmatched by any human civilization.”

Sagarin’s suggestion to borrow from nature to make human society safer parallels his own career shift from “tide-pool biologist” to Washington, DC, science advisor in the months after the 9/11 attacks. Learning from the Octopus is a paean to biomimicry and a handbook on “natural security” from an unlikely, but enlightening, source.

Darwin’s Devices: What Evolving Robots Can Teach UsAbout the History of Life and the Future of Technology

Biomimicry takes a more direct form in the research of Vassar College biologist John Long, who studies the mechanics of evolution by building what he calls “Evolvabots”—machines that model the biological processes of natural selection and adaptation. Long, a pioneer in the sci-fi-sounding field of evolutionary biorobotics, details the goals of his work in Darwin’s Devices.

By constructing tadpole-like robots and subjecting them to predation pressure and competition for food, Long and his colleagues at Vassar’s Interdisciplinary Robotics Research Laboratory were able to demonstrate basic evolution principles: the robotic tadpoles with more vertebrae excelled at surviving compared to tadpoles with fewer vertebrae.

In prose as engaging as it is revelatory, Darwin’s Devices tells the behind-the-scenes story of Long’s unorthodox experiments and the people, places, and money involved in launching and executing them.

Psychology’s Ghosts: The Crisis in the Profession and the Way Back

Harvard psychologist Jerome Kagan sees a crisis of context in psychology, his field of expertise. The oft-derided (at least in some life-science circles) discipline has lost its way, argues Kagan in Psychology’s Ghosts, and present-day psychologists ignore the problems plaguing their field.

“One reason psychology slipped from a position of prominence only sixty years ago to a subordinate rank in the academy was a reluctance to question popular concepts and analytic procedures,” offers Kagan.

Among the cardinal sins committed by today’s psychologists, writes Kagan, are the failure to consider the contextual background and cultural settings in which their observations are gathered and the too-ready treatment of mental disorders with drugs, many of which have poorly characterized effects on brain function.

But Psychology’s Ghosts is not simply a gripe-fest. In the closing chapter of the book, the author offers a prescription to revive the field, which includes focusing on patterns, adding objective measures of behavior and/or biology to subjective verbal descriptions of emotions, and guarding against the intrusion of psychologists’ own personal value judgments into investigations of human personality and pathologies.

Kagan is aware that the book will ruffle some colleagues’ feathers: “Denial of the unpleasant can be an effective defense in individuals, but it is toxic in the sciences.”