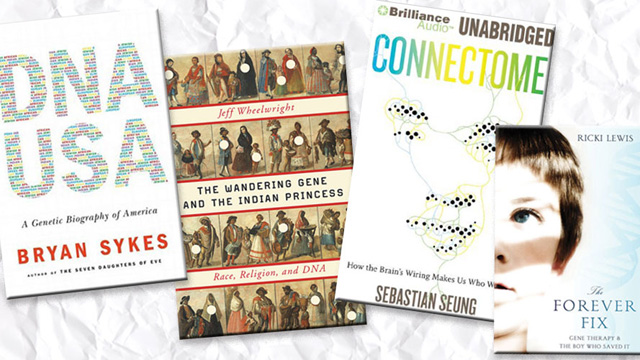 The Wandering Gene and the Indian Princess: Race, Religion, and DNA

How could the life of a beautiful young Hispano woman living in Colorado’s picturesque San Luis Valley be cut short by a genetic mutation that is characteristic of Jews? The quest to answer this question is at the heart of The Wandering Gene and the Indian Princess, a new book by science writer Jeff Wheelwright.

Twenty-eight-year-old Shonnie Medina died of breast cancer in 1999. She was Hispano, an ethnicity comprising both Spanish and Native American ancestors. But Medina’s fatal mutation, called BRCA1.185delAG, had been passed from generation to generation of Jews for 2,500 years. In The Wandering Gene, Wheelwright delves into the genetic history of Medina and her family, and in doing so expands the story to a wider exploration of how science defines race and ethnicity.

The Forever Fix: Gene Therapy and the Boy Who Saved It

The story of another young person burdened with faulty DNA provides the focal point for a look at a different intersection of genetics and modern life: gene therapy. Author and geneticist Ricki Lewis tells of Corey Haas’s remarkable recovery from the brink of blindness in The Forever Fix. In 2008, a legally blind 8-year-old Haas—who was born with a single gene mutation that causes a condition called Leber’s congenital amaurosis type 2 (LCA2)—received an experimental therapy that was supposed to correct his defective RPE65 gene, which prevented his eyes from using vitamin A to send visual signals to his brain.

Just days after his gene therapy session at the Children’s Hospital of Philadelphia, Haas’s vision began to clear. His eyesight, which had gotten progressively worse since he was born—heading for complete blindness by adulthood—returned.

Haas was instantly transformed into gene therapy’s savior. The field was badly in need of a success story after well-publicized failures, such as the death of teenage liver disease patient and gene therapy recipient Jesse Gelsinger. Lewis adeptly traverses the highs and lows of gene therapy and explores its past, present, and future through the tales of those who’ve tested its validity.

Connectome: How the Brain’s Wiring Makes Us Who We Are

Going beyond the influence of genes on our health and personalities, MIT neuroscientist Sebastian Seung introduces us to the Connectome. The connectome, christened only within the past decade, refers to a comprehensive map of the neural connections in an individual’s brain. And Seung holds that it, and not DNA, is the key to our identities.

The sheer size of a connectome dwarfs that of the genome, with a million times more connections than the number of nucleotides in a human genome. Add the propensity for the brain and its multitude of neural connections to change frequently, and it’s no surprise that the connectome remains mysterious.

Seung gives us a glimpse of the limited earlier approaches—19th-century phrenology and connectionism among them—that preceded connectomics, and he predicts that the burgeoning new field finally has the tools to decrypt the brain. One can’t help but be reminded of the early days of genomics, when researchers were picking away at the codes of simpler organisms while the ultimate goal of understanding the human equivalent loomed overhead. Connectome hints at some of the technologies and methods that could finally make teasing apart the human brain, and possibly even the mind and personality, a reality.

DNA USA cracks open the old maxim that America is a “melting pot,” revealing that the real melting occurs deep within the genes that converged on the country from three great continents. University of Oxford geneticist Bryan Sykes imagines this dramatic confluence of genetic material as a grand symphony, and his story takes place in three movements.

In the first movement, Sykes portrays America’s genetic bedrock, as he considers the character of DNA from the country’s original inhabitants and the genes of its settlers, Europeans (including Spanish Catholics bearing Jewish genes), Africans, and Asians. In the second, the score builds to a crescendo as these varied genetic elements collide and swirl to compose the DNA of modern Americans. And in the third and briefest movement, Sykes reaches his coda by exploring how the ancestral seeds within American genomes belie the artificial divisions we’ve created for ourselves.

Sykes introduces us to leading researchers, average Americans with interesting ancestries, and even celebrities, as he travels the country rooting out the melody of America’s genomic song.