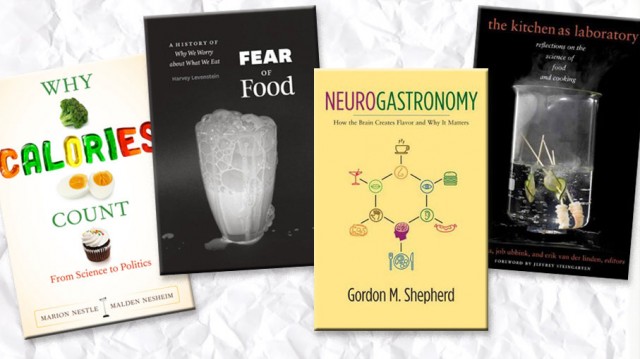 Neurogastronomy: How the Brain Creates Flavor and Why It Matters

Neurogastronomy is an exhaustive treatise on the neural circuitry of flavor. And who better to guide the curious reader through this newly charted territory, in which the sense of smell is paramount, than olfactory scientist and Yale neurobiologist Gordon Shepherd. A renowned olfaction expert, Shepherd has long argued against the notion that our sense of smell has shriveled since evolution stood our ancient ancestors up on two feet and made sight the dominant sense. On the contrary, he argues in Neurogastronomy, smell is still our most important sense as it communicates to our brains sensation of flavor.

The book winds through the nervous system, introducing the emerging science and its physiological epicenter, the “human brain flavor system.” Along the way we learn various tantalizing and surprising facts: Breathing out, not sniffing in,...

Why Calories Count: From Science to Politics

Nutritional science guru Marion Nestle’s new book, Why Calories Count, seeks to crack open the inscrutable nature of the calorie. Think of the book, cowritten with Cornell University nutritionist and biochemist Malden Nesheim, as a diner’s elemental guide to eating. Nestle and Nesheim deconstruct the calorie—the bane of many a belly in the developed and developing worlds—to its barest components as a humble unit of work or heat before reassembling it and discussing its implications for disease, obesity, politics, and modern marketing.

From the strict chemical definition of a calorie to the 25-year quest by the Center for Science in the Public Interest to require nutritional labels, including calories, on alcoholic beverages, Why Calories Count weaves scientific and social tales into a rich portrait of the American diet and the laws that have shaped it.

By thoroughly burrowing into the meaning and impacts of calories, the authors intend to bestow a more relaxed yet active state of mind upon the reader. “Get organized. Eat less. Move more. Get political,” they suggest. Sounds like the most succinct diet book ever written.

The Kitchen as Laboratory: Reflections on the Science of Food and Cooking

Cooking just ain’t what it used to be. Today, the artful trade’s mysteries are being laid bare by modern science, and by a savvy breed of gastronomic adventurers intent on using emerging knowledge of substances and senses to delicious and novel ends. The Kitchen as Laboratory celebrates this revolution.

“We are convinced that the progress of science and cooking go hand in hand,” the editors write in the introduction to the book. “Science can be illustrated by cooking experiments and cooking can be better understood through science.”

In 33 essays by key players in this fusion of fields on the scientific intricacies of cooking and eating, the book explores various facets of our experience with food while including tips and recipes that aim to infuse a little know-how into any home cook. Refreshingly, The Kitchen conveys simple and attainable advice—from choosing the best cheese for gooey grilled cheese sandwiches to a recipe for the perfect cookie dough—as thoroughly as advanced topics, such as conjuring up sugar glasses and jellified beads.

Fear of Food: A History of Why We Worry about What We Eat

Whether you are aware of it or not, if you’re American, many of your dietary choices are dictated by fear. That is the message enunciated by food historian Harvey Levenstein in Fear of Food.

Levenstein details the historical and current conditions leading to the development of food anxiety in the United States. Globalization, industrialization, endorsements by leading scientists, guidelines from government agencies, health claims and promises from behemoth food manufacturers—Levenstein’s exposé of these tangled sources of food fear makes for a compelling read.

The 1908 Nobel Prize-winning biologist Elie Metchnikoff even makes an appearance in Fear of Food: his post-prize assertion that Bacillus bulgaricus bacteria in yogurt could extend life spans to 140 years is offered as just one example of a figurehead leading the American dining public astray.

If eating right was confusing in Metchnikoff’s day, it’s no wonder modern American’s regard food with such unease. A day hardly seems to go by without significant conflicts surfacing in the flood of dietary information to which we’re subjected. Fat’s out, fat’s in; no meat, red meat; whole grains, no grains. In the end, Levenstein’s advice for healthy eating echoes that of author Michael Pollan: “Eat a wide variety of foods, don’t eat too much, and eat relatively more fruits and vegetables.”