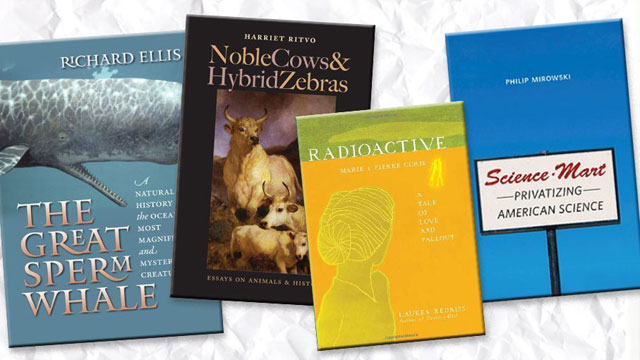 The Great Sperm Whale: A Natural History of the Ocean’s Most Magnificent and Mysterious Creature

Like an aesthetic Ahab chasing his quarry through the inky depths, author, marine naturalist, conservationist, and painter Richard Ellis sets out to capture the mighty Physeter macrocephalus by laying bare its secrets in his latest book, The Great Sperm Whale. But unlike the tragic hero of Herman Melville’s American masterpiece, Ellis succeeds in capturing his muse—alive. The author explores virtually every fascinating aspect of the species: its evolutionary roots as a terrestrial carnivore, its mysterious diving physiology and unique anatomy, its place in literature and popular culture, and the uncertain future of today’s surviving sperm whales. As well as a deep dive into the sperm whale’s evolutionary history, physiology, anatomy, behavior, and ecology, the book is also part autobiography, serving as a window...

In Noble Cows & Hybrid Zebras, a book of collected essays, Massachusetts Institute of Technology environmental historian Harriet Ritvo explores the idea that human history, science, and society are impossible to view truthfully if not through the lens of our interactions with the animals that share our planet. From early hunting parties and the crucial role of domesticated beasts in agriculture to pet keeping and animal experimentation, animals have helped define what it is to be human. The animal rights movement and its position on the use of animals in scientific research is a constantly recurring theme in Ritvo’s writings, and the book reveals her measured take on the issue, which may be at once challenging and illuminating to the scientist reader. “All it will take is a little compromise to protect animals from abuse without stopping scientific progress,” she writes in one chapter. Another of Ritvo’s essays in Noble Cows contextualizes current debates on genetic engineering by tracing the roots of modern animal husbandry in 18th-century England. Ritvo is an important figure in the field of animal studies, and her voice comes through nicely in this compilation, reminding us that, though we split from our nonhuman cousins long ago in evolutionary time, we remain intimately connected to animals to this day.

Radioactive: Marie & Pierre Curie: A Tale of Love and Fallout

by Lauren Redniss
It Books,
December 2010

From the able pen and brush of Lauren Redniss, longtime Op-Art contributor to the New York Times, comes Radioactive, a book pulsing with the vibrant and harrowing story of Marie Curie’s life and work. Redniss, who not only wrote and illustrated the book but designed its typeface, interweaves the tale of Marie and Pierre’s romance and research with past and present scenes of humanity’s brushes with radioactivity (the bombing of Hiroshima and the use of radiation in cancer therapy, for example)—all enlivened by her haunting, hand-colored prints. Deftly interspersing the main story line with later instances of radioactivity’s healing and harmful touch, the book captures Curie’s struggles as a woman scientist at the turn of the 20th century, distilling the passion and pain that attended her remarkable career. Redniss’s recounting of the Curies’ research and other stories of human encounters with radiation are as scientifically accurate as her illustrations and page designs are beautiful. Altogether, Radioactive is a triumph of science writing and illustration and an intensely personal portrait of one of science’s greatest luminaries—all in one engaging package.

In the United States, science is big business. Research and development, whether conducted within American corporations or funded by them, forms the beating heart of the commercial corpus, straining to pump out new blockbuster drugs or the next technological breakthrough. But it hasn’t always been so. In fact, only in the last 30 years has research really gone from noble, publicly funded pursuit to commercial necessity. In Science-Mart, economist and science historian Philip Mirowski laments the “corruption of knowledge,” referring to the ideology that transformed the free exchange of scientific findings into the close guarding of heavily patented jewels of information available only to the highest bidder. Mirowski details the downward spiral, starting in the 1980s as government support for scientific research waned and corporate America stepped in to fill the void, becoming the largest funder of science for the first time. As a result of this shift, patent and intellectual property laws became more robust, academic institutions sought to own patents on discoveries made within their walls, and collaboration between researchers at different universities was tacitly discouraged, the author explains. Certainly not the first book to decry the downfall of basic research in this country, Science Mart thoroughly explains the economic drivers of the problem.