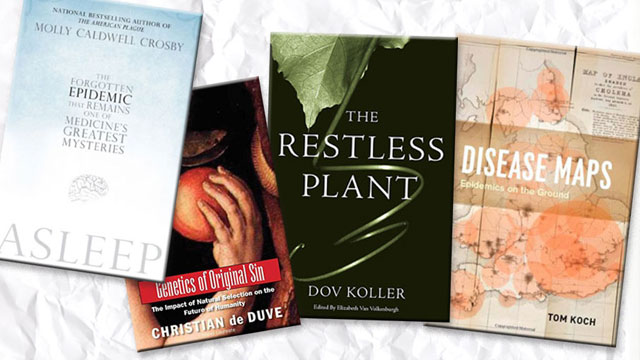 In Asleep, science writer Molly Caldwell Crosby awakens the specter of a rapacious disease that killed more than one million people all over the world in the 1920s. Encephalitis lethargica, or sleeping sickness, emerged from the ashes of World War I to march across Europe and eventually cross the Atlantic to afflict the populace of New York City. Causing swelling and inflammation in specific brain regions, the illness sickened many young people, condemning them to a sleep-like state even as they continued to hear the world around them. Many succumbed, but those who survived often displayed chronic symptoms: loss of vision, sanity, or the use of limbs. In 1927, when the scourge disappeared, the medical establishment was left reeling and befuddled, though studying the patients did help to nurture the...

When one thinks of real movers and shakers among the astounding diversity of life on planet Earth, plants don’t exactly spring to mind. Unless that mind belonged to University of Jerusalem emeritus professor Dov Koller (1925–2007). Members of Kingdom Plantae lead sedentary lives, anchored in the soil eking out a living on resources that are close at hand. But their kinetic shortcomings make it all the more essential for plants to be adept at moving, though the scope of that motion often escapes the notice of casual observers and scientists alike. Koller celebrated plants’ special talent for motion—from the silent whirring of molecular motors to the explosive bursts that launch spores into passing wind currents—in his research and in the pages of The Restless Plant.

The leaflets of Mimosa pudica curl and close when touched, root networks wind through the soil seeking moisture, sunflower heads track the sun like swiveling radio dishes, and Venus flytraps snap modified leaves around unsuspecting insect prey. Not since Charles Darwin’s 1881 The Power of Movement in Plants, a treatise on phototropism, have plants seemed so alive. Though he didn’t live to see the completion of his book, loaded with easy-to-grasp figures and explanatory side bars, Koller’s own restless pursuit of knowledge about how plants move lives on through The Restless Plant.

Genetics of Original Sin: The Impact of Natural Selection on the Future of Humanity
by Christian de Duve, with Neil Patterson
Yale University Press, December 2010

Evolution is shortsighted. What matters most to the passionless process of natural selection are short-term gains, not long-term consequences. The fittest in the present moment wins Darwinian battles, the distant future be damned. So goes the thesis of Nobel laureate Christian de Duve in Genetics of Original Sin, a book that asks and answers the question, “How did the human race come to such a place of utter ascendancy and profligate domination?” Tracing evolution’s steps, from the emergence of life on Earth to the rise of Homo sapiens, de Duve (with help from editor Neil Patterson) paints a clear picture of how and where we went astray. And natural selection is to blame. Whereas gobbling up resources, fighting off enemies, and dogged loyalty to the clan served our hominid ancestors and their descendants well, the unfortunate evolutionary aftermath of these adaptations—overconsumption, violence, and domineering nationalism—linger today, making the world a dangerous place for all living things.

But de Duve does offer some hope, listing in the latter half of the book several ways in which we humans can overcome the vagaries of natural selection and better our station in the web of evolution while bettering our home planet for future generations and our fellow earthlings.

Disease Maps: Epidemics on the Ground
by Tom Koch
The University of Chicago Press, May 2011

Maps are one of the most important weapons in an epidemiologist’s quiver. The occurrence of a particular illness imposed over pictorial representation of cities, towns, countries, or continents places a disease in the public domain, simultaneously helping to track it while hinting about how to contain its spread. In Disease Maps, University of British Columbia medical geographer Tom Koch explores the rich history of using maps to visualize epidemics, from early attempts to chart the menace of plague as it raced across medieval Europe and John Snow’s iconic cholera maps of the 19th century to modern-day depictions of cancer clusters and the spread of AIDS. Festooned with great old illustrations, maps, diagrams, and charts from outbreaks past, Disease Maps urges the reader to witness the genius and folly of the past in order to better map the epidemics of the future. As Koch writes: “The need for the exercise is manifest…not simply to better understand the disease challenges we have faced, century by century, but also to prepare for those we face today and will confront tomorrow.”