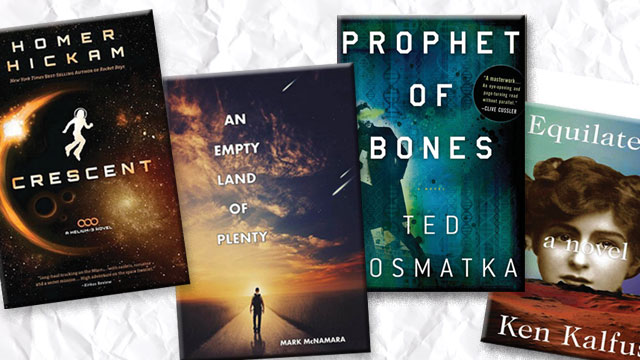 By Homer Hickam
Thomas Nelson, May 2013

Homer Hickam’s Crescent, the second novel in his Helium-3 series, takes us again to the colonized surface of the Moon, where a pitched battle rages between human pioneers and Legionnaires (a.k.a. crowhoppers), genetically modified insurgents bent on killing humans. The book follows young lunar miner Crater Trueblood, who captures and ultimately befriends a crowhopper, the book’s eponymous Crescent Claudine Besette.

Though Hickam’s prose is often purplish, the former NASA engineer does infuse the story with a fair bit of interesting science, making Crescent an entertaining and informative read for the tween set at which the series is aimed. But don’t expect to get swept away in the adolescent romantic arc of the book if you’ve seen a few full moons yourself.

An Empty Land of Plenty

In a last-ditch effort to understand the virus’s mechanics, researchers map the DNA of survivors who had been exposed to the pathogen and discover that they all shared a gene variant common to a certain region of France. It turns out that the same virus rained down on The People millennia ago, wiping out most, but sparing a mother and daughter, who would pass their genes on to future generations and help save humanity from the comet and its deadly pathogenic payload when it streaked past Earth a second time.

The book’s protagonist, high school senior Rusty Weber, navigates the postapocalyptic landscape left in the comet’s wake, and of course . . . finds love along the way. Independently published and distributed by Amazon’s CreateSpace platform, An Empty Land meanders at times, but McNamara keeps the plot moving at a reasonable pace.

Nobel Prize-winning physical chemist Willard F. Libby literally wrote the book (Radiocarbon Dating, 1952) on the oft-used archaeological technique of carbon-14 dating. But in novelist Ted Kosmatka’s new work of historical fiction, Libby’s invention turns biology and history on their heads when it’s used to refute Darwinian evolution and show that the Earth is less than 6,000 years old. Creationism is scientific fact in this alternate universe.

Against this atavistic backdrop, Prophet of Bones follows the life and work of Paul Carlsson, a young molecular paleontologist who stumbles into a shadowy world when he’s summoned to the Indonesian island of Flores to sequence the newly unearthed skeletal remains of a tool-using hominin. After a paramilitary force disrupts Carlsson’s DNA work on the remains, the young researcher flees for his life, losing an eye in the process.

Carlsson escapes to the U.S., where he continues to analyze his troubling findings regarding the age of the specimens, which threaten to overturn modern “science” and society itself. Corrupt and powerful political, religious, and commercial interests fight to squelch Carlsson’s revelations—a struggle that culminates in an action-packed finale.

Kosmatka’s mingling of fact and fiction is clever, and his writing solid, but the book’s logic is strained at times, and its ending is a tad outlandish, even for sci-fi.

In Equilateral, author Ken Kalfus sets fictional, Victorian-era astronomer Sanford Thayer on a quest to make contact with the intelligent beings he suspects are living on the surface of Mars. Kalfus captures the allure of an actual intellectual fad of the period, when some scientists claimed to have observed elaborate canal systems on Mars and surmised that our nearest planetary neighbor must be populated by industrious aliens.

Thayer’s brazen plan is to construct a massive interplanetary signaling device in the form of three paved trenches of equal length forming the sides of a triangle sprawled out across the expansive wastes of Egypt’s Western Desert. The ambitious astronomer plots to complete the project by June 17, 1894, when the orbital positions of Earth and Mars put our planet at the perfect angle for viewing by the denizens of the Red Planet. The pitch-black triangle set against a background of white sand is meant to signal to our Martian neighbors that Earth is inhabited by an advanced civilization.

The plan is plagued with discontented workers, accidents, and setbacks, and is ultimately hijacked by the shady consortium of business and governmental interests that funded the project, intent on using the triangle to establish and exploit trade ties with Mars. Thayer espouses some interesting (if far-fetched) hypotheses about planets evolving as if they were species, and Kalfus’s writing propels Equilateral along at a lively clip, but the tension between the lofty ideals of unfettered scientific discovery and lowly profit-seeking comes off as a little tinny
and simplistic. 