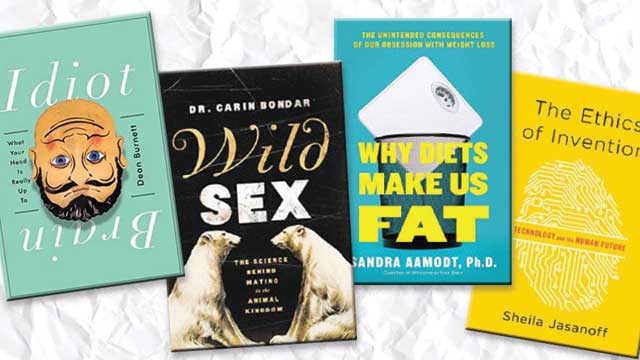 Idiot Brain: What Your Head Is Really Up To

We’ve all had that feeling: you know the one, where it seems as though your own brain is conspiring against you. Cardiff University neuroscientist Dean Burnett certainly has, and he’s devoted his debut book, Idiot Brain, to explaining the biology behind insomnia, blackouts, blank stares, and other instances where our most powerful organ acts pretty powerless.

“Bottom line: the brain is fallible,” he writes in the book’s introduction. “It may be the seat of consciousness and the engine of all human experience, but it’s also incredibly messy and disorganized despite these profound roles.”

But we can learn something from the brain’s occasional hiccups, Burnett explains. Understanding these temporary lapses—such as how we can recognize a face but blank on the name that goes with it—highlights the stark differences between our modern...

Featuring a healthy dollop of humor (not surprising from Burnett, who dabbles in stand-up comedy), Idiot Brain is a refreshing dive into the neuroscience that strives to make sense of all those times when our brains just don’t make sense.

Wild Sex: The Science Behind Mating in the Animal Kingdom

Population ecologist Carin Bondar has made a career out of sex. Wild Sex in particular. In her latest book, which carries the same title as her web video series, Bondar expounds on her favorite subject: the smorgasbord of biology and behaviors that govern the world of animal copulation.

“The notion of normal when it comes to sex is completely impossible to define, which is an important point to keep in mind,” she writes in the introduction to Wild Sex. “There is really no regular way that sex can or should happen. The human-derived notion of what happens ‘naturally’ is about to get blown out of the water, because if we are going to label ‘natural’ as all the things that happen in nature, we’ve got to grasp that natural could mean stabbing one’s partner in their forehead with a razor-sharp penis, or fertilizing juvenile females before their eggs are even mature.”

Bondar’s tour of the oddities of animal sex doesn’t stop at the piercing penis of the male sea slug. She goes ever deeper into the evolution, equipment, and behaviors that make the topic so titillating.

Why Diets Make Us Fat: The Unintended Consequences of Our Obsession with Weight Loss

Dieting is big business. Americans, among the most overweight people on Earth, spend inordinate amounts of money, energy, and time every year battling the bulge. This despite the fact that most diets—even those that result in dramatic weight loss—typically end with the dieter gaining back the weight they lost, and then some.

Neuroscientist Sandra Aamodt counts herself as one of millions trapped in a cycle of expanding and contracting waistlines. She relays her personal story, and through it details the biological and psychological perils of dieting, in her latest book, Why Diets Make Us Fat.

Aamodt tells of her eventual, and simplistic, success in breaking free from the vicious circle. “As my New Year’s resolution in 2010, I vowed to go an entire year without dieting or weighing myself and to exercise every day,” she writes. “I was so pleased with the results that I’ve maintained all three habits ever since. My weight used to bounce around a fifty-pound range as I starved or binged my way through the first half of my adult life, but now it remains stable even though I don’t worry about calories anymore.”

The key to ditching the practice of dieting is to understand how our brains, running on the prime directive to keep our bodies alive, drive our habits and routines, Aamodt suggests. “Instead of fighting with our brains, we can accept their limitations and arrange the circumstances to create new habits that support our well-being,” she writes.

The Ethics of Invention: Technology and the Human Future

Humanity is firmly ensconced in the technology age. But the amazing progress our species has made in the relative blink of an eye is accompanied by thorny ethical dilemmas. In her latest book, The Ethics of Invention, Sheila Jasanoff of the Harvard Kennedy School of Government takes aim at the balance between risk and promise in our modern race to innovate.

Biomedicine features prominently in the book. The crux of the matter: modern advances in genetics and genomics carry with them tons of ethical baggage and controversy. The rise of genetically modified organisms is a case in which technology has outpaced “the theories and practices of global governance,” Jasanoff writes. And of the privacy and ethical issues surrounding the decoding and manipulation of the human genome, she writes: “The decades following the unraveling of the genetic code witnessed intense and widespread social experimentation with the stuff of life. . . . What emerged very clearly from this ferment is that disentangling the laws of life went hand in hand with creating new entanglements between lives and laws.”

Jasanoff reminds us that as we forge ever further into a brave new future, technology expands what we can do, but ethics dictates what we should do.