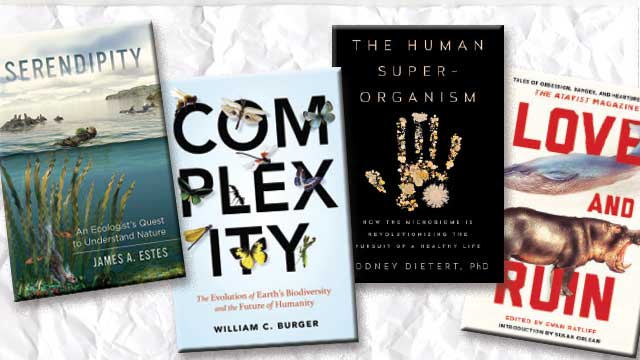 James A. Estes
University of California Press, May 2016

Part memoir and part ecology primer, Serendipity—the latest book from celebrated marine ecologist James Estes—is an insightful reminder that when observing nature, there is always much more than meets the eye. Estes relates his epiphany that apex predators play key roles in kelp forest ecosystems, an insight he gleaned in 1971 while studying sea otters in Alaskan waters. “In the absence of sea otter predation, sea urchins had increased in size and number, and the larger and more abundant urchins had eaten the kelp,” he writes. “This was my ‘aha moment,’ a profound realization that would set a path for the remainder of my life.”

Estes took that revelation and ran with it, building a conceptual framework and a career that would see him apply his understanding of ecology to numerous marine ecosystems...

Complexity: The Evolution of Earth’s Biodiversity and the Future of Humanity

Another accomplished biologist, William Burger, curator emeritus at Chicago’s Field Museum of Natural History, has written a fascinating book about evolution and the future of our planet at the hands of its most successful—and destructive—species. In Complexity, Burger describes the intricate interplay between species that took Earth’s biota from single to multicellular organisms, resulting in the evolution of all manner of biological complexity and the rich tapestry of biodiversity that blankets the Earth today.

Central to Burger’s sweeping history of life on Earth is the theme of cooperation. From endosymbiosis to the development of cooperative species such as ants and bees, working together is a hallmark of biology, he explains.

And interaction between species and individuals continues to mold the fate of our planet. Human culture helped us become a dominant species, but overconsumption and continuing conflict now threaten the very fabric of our world. Burger is not optimistic: “Regrettably, I am a pessimist who sees modern industrial society as unsustainable and ‘human nature’ incapable of diminishing its biological and cultural appetites,” he writes. “Also, I’m worried that, since people cause trouble, more people will inevitably cause more trouble.”

The Human Superorganism: How the Microbiome Is Revolutionizing the Pursuit of a Healthy Life

With each passing day, researchers are learning more about the intricate ways that humans interact with our microbial copilots. And now, immunologist Rodney Dietert has written a definitive book on what we know and what we have yet to discover about the fascinating world of our microbiome.

In The Human Superorganism, Dietert expresses the view that well-meaning medical science has gotten it wrong for decades. “Wonderful scientific discoveries significantly reduced infant mortality, lengthened life spans, and drove medical technologies,” he writes. “However, the fundamental approach to human biology behind these advances unintentionally ushered in an epidemic of diseases afflicting humanity in the twenty-first century.” By treating the human body as a pure organism and by focusing so intently on the human genome, biologists failed to appreciate the fact that individuals are not pure—nor are they individual.

Dietert argues that the rash of noncommunicable diseases—cancer, obesity, and others—that plagues humanity is a direct result of this misplaced perspective. He advocates for a perceptual shift in which humans are viewed more like ecosystems that support a teeming microcosm of microbial partners.

Love and Ruin: Tales of Obsession, Danger, and Heartbreak from The Atavist Magazine

From the Web pages of The Atavist magazine comes this compendium of award-winning, long-form nonfiction, edited by Evan Ratliff, who cofounded the Atavist multimedia publishing platform in 2009.

The centerpiece of Love and Ruin is the story of the same name, which won the 2014 National Magazine Award for best feature writing. That piece, written by James Verini, touches on the imperiled archeological artifacts of war-torn Afghanistan, but other stories in the book focus more squarely on the life sciences.

Leslie Jamison’s “52 Blue” is a story about the trials and tribulations of marine biologists and the blue whale who sang at a frequency (52 hertz) that made his song unhearable by his fellow leviathans. And the story nicely encapsulates what sets writing in The Atavist apart from the quick-hit click bait that has become so common in online news. Jamison explores the people and personalities behind the science. She takes time to describe in vivid detail their motivations, challenges, and triumphs. Readers are sure to feel as much, if not more, for the story’s human devotees of the whale as they are for the hapless cetacean itself.