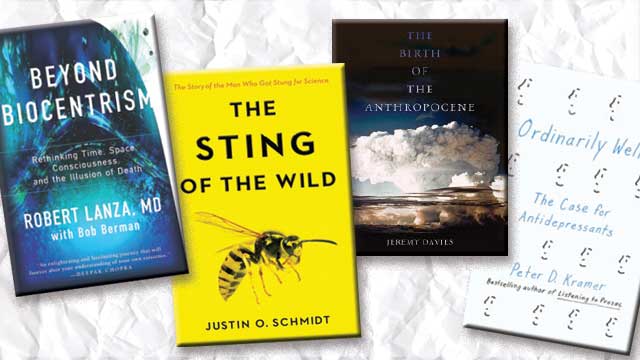 Beyond Biocentrism: Rethinking Time, Space, Consciousness, and the Illusion of Death

In a follow-up to their celebrated 2009 book, Biocentrism, stem cell researcher Robert Lanza and astronomer Bob Berman further consider the farthest reaches of science’s grip on reality in Beyond Biocentrism. As they did in their earlier book, the duo highlight the recent scientific advances that are shaking our understanding of time, space, life, the universe, and our place in it. “[W]elcome back for a deeper and more thorough exploration into [biocentrism], including chapters that solely involve key issues such as death, and important ancillary investigations into topics such as awareness in the botanical world, how we gain information, and whether machines can ever become conscious,” the authors write.

Given the pace of research not only in basic biology, but in neuroscience, cosmology, and theoretical physics, it’s conceivable...

The Sting of the Wild: The Story of the Man Who Got Stung for Science

Self-experimentation has a storied history in the annals of science. Nobel Laureate Barry Marshall drank a solution of Helicobacter pylori to show that the microbe could cause gastritis; Nobel Prize-winning cardiologist Werner Forssmann inserted a catheter into his own heart’s atrium; and renowned virologist Jonas Salk administered his polio vaccine not only to himself, but to his wife and children, before beginning double-blind clinical trials. Entomologist Justin Schmidt has taken on the mantle, subjecting himself to dozens of painful stings from the insects he studies. He tells the story of his unorthodox research—and publishes for the first time in a book his “Schmidt Sting Pain Index”—in The Sting of the Wild.

In an entertaining narrative of how he stumbled on his calling, Schmidt recalls the encounter with a harvester ant in Georgia that launched him on the path of simultaneously becoming both subject and experimenter. “Wham, an ant stung me. Serendipity had struck,” he writes. After surviving the rending, long-lasting pain of that sting, Schmidt and his wife Debbie struck out across the western U.S. seeking to capture and catalog every species of stinging insect they could find. “We had no desire to be intentionally stung, but if we did get stung, we might as well be prepared to record the data. Wasting a good opportunity for a data point seemed crazy.”

Schmidt then gives a chapter-by-chapter account of the stings of various insect groups, from fire ants and yellowjackets to tarantula hawks and honeybees.

The Birth of the Anthropocene

Our species is causing such a drastic shift in Earth’s climate that we’ve brought about a new epoch in the planet’s geological evolution. Christened the Anthropocene, the man-made shift is effecting every other living creature with which we share our planet. As University of Leeds English lit lecturer Jeremy Davies describes in The Birth of the Anthropocene, two key facts bear out this grim concept: carbon dioxide levels are the highest they’ve been in three million years, and we are in the midst of the largest mass extinction event since the cataclysm that decimated the dinosaurs.

Even as the concept of the Anthropocene can help humanity frame the crisis into which we’ve plunged ourselves and the rest of the biosphere, doing so cannot provide a solution to the problem. “It is a way of seeing, not a manifesto,” Davies writes. “By providing [environmentally conscious citizens] with a standpoint from which to observe the winding course of earth history, the Anthropocene creates an opportunity to comprehend the environmental calamity in its full dimensions.” Addressing the realities of this new epoch, the author suggests, falls squarely on the shoulders of politicians and the activists and scientists whom they rely upon for information.

Ordinarily Well: The Case for Antidepressants

Brown Medical School psychiatry professor Peter Kramer has been writing and thinking about depression and antidepressants for a long time. His 1993 book Listening to Prozac was met with controversy, as Kramer conducted the thought experiment of envisioning “cosmetic psychopharmacology,” in which mood-altering drugs would be used in healthy people to encourage favorable personality traits. With his latest book, Ordinarily Well, Kramer defends the use of antidepressants, once-touted “miracle” therapies that have engendered a much more nuanced reaction in recent years, as some studies have linked the drugs to increased risk of suicidal thoughts in adolescent patients.

Kramer reviews current research on antidepressants and defends the careful use of the drugs as treatments for the devastating illnesses he’s seen in his own patients. “I will try never to lose sight of our main question, whether antidepressants work,” he writes in the book’s preface. “We’re talking about a major scourge of humankind, depression. We’re thinking about many millions of people, those on medication and those not yet offered care. We need to know.”