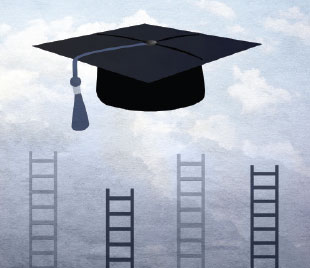 © iSTOCK.COM/THEADESIGNPhD degrees aren’t what they used to be. In 1973, more than half of doctoral degree graduates in biological sciences landed a tenure-track position within six years. Three decades later, that fraction had dropped to 15 percent. Demand has not kept pace with supply, says Bruce Alberts, a professor of biochemistry at the University of California, San Francisco (UCSF), and cofounder of the nonprofit organization Rescuing Biomedical Research (RBR). “The real world for [biomedical PhD students]  is that maybe a fifth will ever get academic jobs,” he says. And it’s not just academia that’s overpopulated, he adds. “There aren’t even enough jobs currently in the private sector to make it possible for all of them to get research jobs.”

As a result, trainees spend more and more time in postdoctoral positions, and even then, their chances of landing a tenure-track position are in decline....

Yet despite these sobering statistics, PhD programs continue to grow—in the U.S., the life sciences saw an increase from around 8,000 doctoral recipients in 2004 to more than 12,500 a decade later—and show no signs of leveling off. “Graduate students are fundamental to the vitality of the research enterprise,” notes Alberts, who served for more than a decade as president of the National Academy of Sciences, adding that many university departments see little reason to stem the inflow of this young (and cheap) workforce.

The real world for biomedical PhD students is that maybe a fifth will ever get academic jobs.—Bruce Alberts
University of California, San Francisco

The resulting situation for today’s PhDs—a hypercompetitive climate during graduate school and limited research-focused career prospects afterward—represents what many see as a systemic flaw in biomedical education that is impractical and unethical to maintain. It’s a problem that a growing number of students, researchers, universities, and companies are now attempting to address, some through initiatives to inform and better prepare current students for nonacademic and potentially nonresearch career paths, others through longer-term efforts to modernize PhD admissions and education. Given the current job climate, Alberts says, “we have an obligation to tailor our graduate programs differently.”

Because leaving academia is inevitable for the majority of today’s biomedical PhDs, several institutions have established initiatives to help smooth the transition. The National Institutes of Health’s Broadening Experiences for Scientific Training (BEST) program, for example, provides funding to 17 US universities for workshops, internships, and other training to expose students and postdocs to a variety of science-related careers. Meanwhile, AAAS holds regular workshops on science policy and communication, and Johns Hopkins University School of Medicine offers a PhD program to train industry scientists. Other universities, such as the University of Wisconsin–Madison, also offer courses in nonacademic work experience for biomedical students. (See “Making the Most Out of School,” The Scientist, May 2016.)

Nevertheless, these opportunities are few and far between, and career development classes remain optional for most PhD candidates. A 2015 survey by Nature of more than 3,400 graduate students worldwide—most engaged in biological, chemical, or medical research—found that less than 20 percent (30 percent in the U.S.) reported obtaining useful career advice from their institutions, and just one-third had attended career workshops or used other institution-provided resources. Although some respondents noted that these services were not available, many had not taken advantage or were simply not aware of what was on offer.

This lack of engagement is partly due to a lack of forethought: an earlier Nature survey of 5,000 people found that less than half of incoming graduate students had considered their job preferences before enrolling. There is also a latent disdain for work outside academia, says Mike D’Ecclessis, a graduate student in cell and developmental biology at Rutgers University. “Most PhD programs are not oriented to looking outside of the lab,” he says. “It’s still treated like . . . if you do something else, you’re veering off course.” Indeed, a 2012 study found that half of PhD students in the life sciences felt strongly encouraged by their departments or advisors to pursue a faculty research position, despite the dearth of opportunities in academia.

To help tackle these attitudes, several websites—increasingly run by students themselves—have sprung up over the last decade to provide information about the options available to newly minted PhDs. (See “Where Do They Go?” on opposite page.) U.S.-based Versatile PhD, for example, maintains a database of research and nonresearch career options, job opportunities, and testimonials from PhDs who have found employment outside academia. D’Ecclessis, meanwhile, assembled information he’s gathered during his time at Rutgers to set up the PhD Career Guide, which hosts information on employers, salaries, and working hours for various careers.

A handful of private companies also offer career support for trained researchers. The key is to get people thinking about what they can offer in addition to their science, says Larry Petcovic, cofounder and vice president for communications at SciPhD, a company that provides services from basic career planning to interview preparation. “Most PhDs are self-limiting in terms of how they see their talent,” he says. “It’s like they’ve been conditioned to think the only thing they can do is their science in a research environment. But there’s a lot more there.”

These services can help PhDs develop the soft skills necessary to land a professional job, including communication and project management. If students start thinking about their careers early enough, they may also have the opportunity to take courses in finance, policy, communication, or other fields outside their department. “Anything else you can do in addition to your science makes you a hot commodity,” Petcovic notes.

Most of these efforts are relatively recent, but there’s at least anecdotal evidence that they’re already having an impact. Jasmine Hughes, a bioengineering PhD student and codirector of University of California, Berkeley-based career organization Beyond Academia, says that she’s starting to see graduate students think about careers sooner. “We still get people coming to us who have no idea what they’re going to do,” she says. “But the later-stage panic is not as common as it used to be, because people have had the opportunity to explore it earlier—which is great. They can be more concentrated on narrowing down what their focus should be.”

While exploring nonacademic careers may improve a PhD’s employability, some argue a longer-term solution is needed to address the gap between the number of graduating PhDs and the number of jobs requiring the qualification. Although the unemployment rate for all bioscience PhDs was around just 2 percent in 2013, “you cannot look at the fact that these people are not unemployed and infer that there’s no problem,” says Paula Stephan, an economist at Georgia State University. “Yes, unemployment is low for people with PhDs, but that doesn’t tell you anything about whether they’re underemployed or whether they’re using the kinds of skills they were trained with.”

Data on PhD-holders’ career outcomes are thin, but there are hints that underemployment may be an issue. A 2014 report from the American Institutes for Research found that a third of PhD holders in the U.S. reported themselves underemployed, and a study published last year as part of UMETRICS—a University of Michigan project that collects data on scientists’ employment—found that the average salary for biology PhDs was just $36,000 in their first year of work, a result the authors speculated could be partly explained by low postdoctoral salaries. Although PhDs may ultimately earn a higher salary than less qualified workers, the years lost at the beginning of their careers could cost them in the long run.

It’s not just PhD students who suffer from the imbalance between degree programs and jobs, either; Stephan notes that there are significant societal costs of training thousands of underused PhDs a year. “People will say, ‘Well, no matter what, a PhD is a great degree; it trains you to do all kinds of things,’” she says. “But if a number of the jobs that PhDs end up getting could have been done by people with less training, it’s not a very efficient use of resources.”

One possible solution to the problem is simply to cut graduate school admissions, creating a better match between the number of researchers trained and the number of research jobs available. The idea is not new: Stephan has advocated for such academic “birth control” for four decades, and Alberts and his colleagues at RBR made a case for a broad approach to reducing entrant numbers in a 2014 PNAS article (111:5773-77). But such proposals have so far proved unpopular. At a workshop following the publication of RBR’s paper, for example, “the recommendation to cut PhD programs got the strongest pushback from the audience,” says Alberts. “People argued that we don’t know who will be a great scientist, and the people who will be great scientists can’t possibly know either, so we need to cast as wide a possible net for talent.” What’s more, not all graduate programs are equal, he adds—some have higher placement rates in academia or industry than others, and it’s not clear how cutting PhD programs should take this into account.

Other suggestions include requiring students to complete a master’s program before embarking on a PhD in an attempt to select for dedicated researchers earlier; increasing the proportion of students funded by individual fellowships and training grants, rather than faculty research grants, to dissociate university admissions from the funding of specific labs or professors; and hiring more staff scientists to carry out day-to-day lab work to circumvent the need for a workforce of PhD students. But, such adjustments will take time to implement. “There’s a huge amount of inertia,” says Alberts. “To accomplish any of these changes you need to create a movement, you have to get institutions on board, scientific societies, the NIH. . . . We’re going to have to work with our colleagues to make these things happen. They won’t happen just because we say them.”

In the meantime, Alberts is working toward a more immediate solution to achieve the same goal: show prospective students the data. RBR advises universities to detail on their websites “the actual outcomes, as far as they can tell, for their PhD graduates,” Alberts explains, adding that five universities—Johns Hopkins, Duke, Harvard, Princeton, and UCSF—have already committed to adopting this practice. D’Ecclessis is in favor of the approach. “It would be incredibly helpful for people who are considering a program to see what it actually entails—what the pitfalls are, what the opportunities will be,” he says. “There are still a lot of people who are interested in academia who don’t understand the recent trends.”

Alberts and others hope to make a dent in the biomedical PhD’s sustainability problem by warning prospective students about the long-term risks of a small job market and by helping current students prepare for the options available to them after graduation. But just as important, notes Alberts, will be an evolution in the attitude of the academics who train these students.

In the past, professors could get away with thinking that “anyone who’s any good will get a job they want in academia or biotech,” he says. “But now we know that’s not true. Those of us that are older, who lived in an era where that was true, have to wake up and look at the data.”