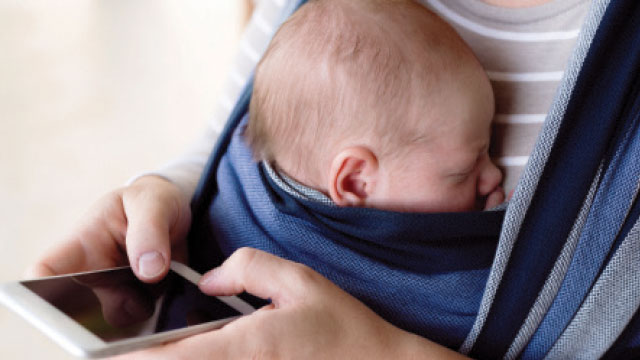 Back in February, biomechanics researcher Eva-Maria Collins brought her husband, three-year-old son, and infant daughter to the Biophysical Society’s annual meeting in New Orleans. Collins, whose lab is based at the University of California, San Diego, was being honored for the 2016 paper of the year in Biophysical Journal—a study describing how Hydra open their mouths (apparently, it involves ripping through epithelial tissue).

The night before, no one in the Collins family had slept much. “The kids had a very rough night,” she recalls. Given the subsequent crankiness, Collins and her husband decided to divide and conquer; he would take their son and she would handle the baby. Later that day, Collins took the stage, daughter strapped to her torso in a baby carrier, and delivered her presentation. “Besides me bouncing, I think you cannot tell there’s a baby,” she says. “She just sleeps.”

But while Collins may pull it off with aplomb, bringing a baby to meetings isn’t always a solution for parents of young children. Fortunately, conference organizers recognize that child care is important. “There are a lot of conferences that now acknowledge that people have families and lives outside work,” says Kristi Casey Sanders, the director of professional development at Meeting Professionals International, a trade association. “It’s actually a selling point [to attendees] if they can bring their families with them.”

On site, out of mind

Last November, tens of thousands of researchers filed into the San Diego Convention Center for the annual Society for Neuroscience (SfN) conference. Among them was Amir Eftekhar, who studies spinal cord rehabilitation at the National Center for Adaptive Neurotechnologies in Albany, New York, and who had brought along his one-year-old son. Eftekhar says he and his wife, also a neuroscientist, decided to bring the baby because, having moved to the States recently from the U.K., they didn’t have grandparents or other relatives near home to watch him while they traveled. On some days they took turns, one spouse parenting while the other attended the conference, but when both had a packed schedule they took advantage of on-site day care facilities.

SfN has been hosting babysitting on site since 2009. Parents can drop off kids ranging from 6-month-old babies to 12-year-old tweens. The number of families taking advantage of the service has varied over the years, from a high of 50 in 2011 to a low of 33 at the most recent meeting. “For Neuroscience, 20 percent of our [day care] attendees are coming for the first time, which means child care could be instrumental in helping them attend,” says Dana Kiffmann, the general manager of KiddieCorp, the company that provides day care for SfN and numerous other professional conferences around the country each year.

According to Emily Ortman, SfN’s media and communications manager, the society subsidizes 45 percent of the babysitting costs for parents. This varies per conference, says Kiffmann, as conference organizers decide how much of the tab they are willing to pick up. The annual meeting of the Society for Molecular Biology and Evolution (SMBE) stands out among science conferences by paying full freight for attendees’ on-site child care, according to SMBE president Laura Landweber of Columbia University.

Cost can be a significant deterrent for parents to bring kids—or to travel at all if they can’t leave kids behind.

SfN and other large conferences have also begun to offer accommodations for nursing mothers, dedicating private space for breastfeeding and refrigerators for storing milk. Recently, the American Association for Cancer Research (AACR), which for years has provided both on-site day care and privacy for nursing mothers at its large annual conference, has started to offer such services at the organization’s smaller meetings (it hosts about 50 a year). “That’s something I’ve seen change in the last two to three years,” says Pamela Ballinger, the senior director of meetings and exhibits for AACR. “At big meetings, it’s commonplace.”

For smaller conferences, dedicating a facility to babysitting is not typically feasible—costs may be prohibitively high, or there isn’t enough demand. But conference organizers aren’t leaving parents out in the cold. At a minimum, they might direct attendees to the hotel concierge to find care providers, or compile a list themselves.

While children are not a frequent sight at Keystone Symposia—specialized meetings that take place at vacation hot spots—there’s an uptick in families around spring break, says Heidi Daetwyler, Keystone’s director of meeting management. Sometimes the host resort has babysitting available, but other times parents need to find care providers themselves. To make it easier, in 2015 Keystone developed an online bulletin board for researchers looking for day care, modeled after a roommate bulletin board attendees use to find people to share a hotel room. Parents can ask for and offer advice on finding babysitters, or arrange to watch kids for one another or to share the expense.

Cost can be a significant deterrent for parents to bring kids—or to travel at all if they can’t leave kids behind. In 2015, Cell Symposia began offering monetary awards to parents, two to four awards of $500 each per meeting—originally the brainstorm of Anne Granger, a scientific editor at Cell Metabolism and the mother of two small children. “Because travel awards do not typically cover child care–related expenses, we saw a great opportunity to better support young scientists and created the Elsevier Family Support Awards to help offset the costs of child care for early-career researchers (students, postdocs, and young investigators within their first five years) attending any of our Cell Symposia,” Granger wrote to The Scientist in an email. “A highlight of this award is that both women and men can apply.”

SMBE also offers travel awards to cover child care, handing out $1,000 each to about 50 attendees each year. Parents can choose how to spend it, such as on airfare for their kids or for covering day care costs back home.

For parents who, for one reason or another, cannot leave their children in the care of others, conferences have different policies for bringing children into presentations or poster sessions. SfN, for instance, has a rather lenient policy, allowing kids in sessions and in the meeting hall, as long as they are with a guardian. “SfN also supports women breastfeeding in the session rooms so they can continue to experience the full meeting and care for their infants,” Ortman wrote in an email to The Scientist. Keystone meetings have a similar policy—as long as kids aren’t being disruptive, they are welcome to join their parents.

Ballinger says AACR has strict rules for the exhibit floor: no children under 12 are allowed, primarily for safety reasons but also so presenters are not interrupted. But, she notes, the meeting has fully comprehensive, on-site day care options—and it’s discounted to about $12 an hour, a bit more for little ones under six months.

Other meetings do not have codified rules about bringing children into sessions, which may imply flexibility. Collins says that in her experience organizers have always been welcoming. In fact, when Collins presented on her top 2016 paper, the editor-in-chief of the publication—Biophysical Journal—tweeted a picture of her on stage with her daughter. The post earned hundreds of likes and numerous positive comments.

Collins’s advice to others needing to bring children along: just ask. “The one thing I realized is that before I started asking people whether it was OK, I would worry way too much about what people would think,” she says. “In most cases, the organizers have been really trying to make it possible to bring the infant.”